I try to avoid making outlandish statements as they have a tendency to come back and make you look foolish.

However I have no qualms in saying that I regard Manly tyro Kieran Foran to be the best young player in the game.

I thought this was the case throughout last season and I have seen nothing in the opening four rounds of 2011 to change my thinking. In fact, just the opposite.

It's still a relatively big call when you look at the wealth of talented youngsters not yet 21 and shy of 50 first grade games who also have strong claims. The likes of Jamal Idris, Josh Dugan, Lachlan Coote, Matt Gillett, Trent Merrin, Will Hopoate and Ben Barba head a stellar cast of outstanding players destined to achieve great things in our game.

Foran may not be the most skilful, quick or even naturally talented of the bunch, but from what I have seen he is the best competitor both physically and mentally.

At 20 years of age with just 36 top grade appearances under his belt he already plays with an intensity and maturity of a footballer who usually boasts much broader experience.

This competitive nature is what I believe gives our greatest-ever players their edge. To want the ball when the game is there to be won, to be playing with the same desire whether 20 points up or down, to put everything into every play to give the team the best chance of success are the tell-tale signs of a winner.

I also saw that in Benji Marshall's game in a beaten side against the Roosters on Sunday.

I distinctly remember Foran's debut in round 15 of 2009 where he actually scored a try with his first touch of the football in the Sea Eagles' 20-14 victory over Canberra at Brookvale Oval.

While that was a nice achievement, what was most impressive was his defensive effort against the Raiders' monster pack. Every time the likes of Tom Learoyd-Lahrs, Trevor Thurling or Scott Logan tried to run over the top of him, Kieran picked them up and put them on their backside.

We've seen the same commitment in defence in the opening month of this year's competition, demonstrating leadership and providing inspiration to his teammates.

There was no better example than when he "upped the ante" early in the second half against the Roosters in round two, putting his body on the line with no thought of self preservation to help lift the under-strength Eagles to an unlikely victory.

This was followed by similar strong efforts against Newcastle and South Sydney, albeit for different results.

Against the Rabbits on Friday night we also saw the growing improvement in his ball-playing ability with his more direct approach.

Instead of the much-used sweeping second-man plays, Kieran relied on instinct to take the ball to the line to take advantage of a struggling defence.

In the 28th minute he noticed that Kane Morgan had not moved up alongside teammate Dave Tyrrell on the final tackle. With Souths' line now staggered it was a matter of hitting Jamie Buhrer on the outside who had little trouble bursting through the rookie winger.

In what could have been the most crucial play of the night Foran again went at the defence in the 79th minute to give Will Hopoate the necessary space to cross wide out and give Daly Cherry-Evans the chance to convert and force extra-time.

It has actually been refreshing in recent weeks to see a number of teams drop off the multitude of overused second-man sweeps and attack straighter with flatter passes.

This was particularly evident on Saturday night where three of the eight tries in the Parramatta – North Queensland clash were scored in such a fashion.

Johnathan Thurston is still the best in the game at making the right decision based on what is in front of him. He invariably comes up with the perfect pass to capitalise on a defence that is struggling in its formation.

In the 13th minute with the Eels in disarray following a long Ray Thompson break Thurston cut out two men to find Kalifa FaiFai Loa virtually unmarked. With Ryan Morgan and Ben Smith unable to get back and across in time it was a simple task for the Cowboys left winger to cross for the first of his two tries on the night.

However Parramatta hit back soon after with a couple of great passes enabling Luke Burt to equal the club's all-time try-scoring record.

Taking a leaf out of the Thurston book Daniel Mortimer threw a beautiful face pass across both Jarryd Hayne and Taniela Lasalo to Joel Reddy. This established a two-on-one overlap with Reddy catching and passing in the one movement after drawing Ashley Graham to send Burt over in the corner.

The Eels maintained this attacking structure for the majority of the contest and it was again rewarded 35 minutes later with Jarryd Hayne operating as second receiver outside Jeff Robson. The star fullback again used Lasalo as a foil to pass in front of and found Ben Smith who drew and passed to the now unmarked Etu Uaisele.

Of all the playmakers in action over the weekend it is Kieran Foran who seems to be making the most progress in developing his awareness of what kind of pass is required for what situation. He has a long way to go to be in the Thurston class but he is on his way.

He already looks comfortable calling the shots despite the presence of senior men in Jamie Lyon and Glenn Stewart.

It is also worth noting that generally a young player in the halves has the luxury of an experienced campaigner alongside to help make the transition into first grade that bit easier. In his short time at the top level he has been partnered by rookies Trent Hodkinson and Dale Cherry-Evans.

Wests Tigers coach Tim Sheens has said that you are not really a true first-grader until you have battled through 50 games.

With half a season of matches still to be played by the young man to achieve this earliest of milestones the sky truly is the limit. 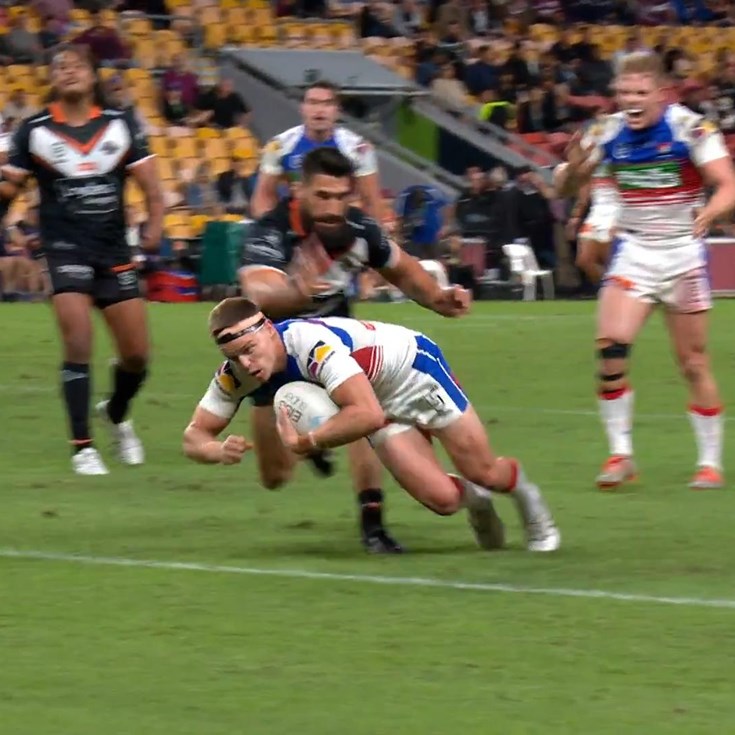 Brailey sells the dummy and everyone buys