With one third of the 2011 NRL regular season already in the books, some things have become obvious. The Dragons are still the team to beat, the Broncos and Storm are their early challengers, the Raiders are the shock strugglers and the Eels still can’t score points. But what is the key stat from your side compared to last year? What is a major factor in determining whether they are competing better or worse than last season?

Rather than get you to sift through thousands of numbers and averages, Stats Insider has done the job for you and presents each teams case. Today we present the ‘case’ for the eight top teams; the eight bottom teams on the ladder will appear tomorrow.

Incredibly, the Dragons are an even better defensive unit this year, conceding 9.8 points a game compared to 11.8 last year. Also, they are making more metres (1448 from 1401) and significantly more offloads (14.4 from 10.6) – but the single biggest change for the premiers is the fact they are now potent on both sides of the ruck.

Last season they scored 48 tries on the left side of the field and just 21 on the right. They also scored 21 up the middle. Some 53 per cent of their tries were on the left edge and just 23 per cent on the right or middle. With Mark Gasnier back to his best the percentages now read 46 per cent left, 33 per cent right, 21 per cent middle.

They have already scored the same number of right-edge tries through eight rounds that they tallied all season last year. Opposition teams must now contend with ‘champagne’ attack going both ways… a daunting prospect.

It comes as no surprise to most who have watched the Broncos this season that defence has been their main improvement. The side has won seven matches in a row based on a brilliant defensive foundation. For a long period no team could score a try against them in the second half, such was their desire to tackle themselves to a standstill.

The raw numbers tell the story: In 2010 the Broncos conceded an average 22.3 points every week. So far in 2011 they are letting by just 10 points a match. That’s a difference of more than two converted tries a game. And last year they missed 37 tackles a game (second most) – this year that’s dropped to 27. No wonder they are a front-runner.

Having lost a massive chunk of their squad due to last season’s salary cap scandal Melbourne’s early form is a tad surprising. Of course they still have talent; it was just a matter of whether or not they could gel as a unit. The result? In 2011 they are tallying more than a converted try’s worth of extra points extra each week (26.6 points, up from 20.4). Arguably the biggest change in Melbourne’s philosophy has been second-phase football and offloads. During their dominance the Storm rarely passed the ball. In 2009 they passed just 9.8 times a match, last year it increased a little (as they weren’t playing for points) to 11.7 a game but now it is up at 13.1 offloads each week.

The new dimension to a Bellamy-coached side has caught others off-guard. Having allowed 12 offloads from opposition teams on average last year, the Storm have also tightened up defence in this area, conceding an NRL-low of just 7.2 this season.

Hallelujah! The Cowboys seem to have emerged from a long hibernation. After three dismal years, the team with a roster of attacking brilliance is finally… attacking brilliantly. Last season the Cowboys could muster only 17.7 points a game, the third worst in the league. Currently this year they average 24 points, second in the NRL – although this is not the greatest part of their turnaround.

While Thurston and Bowen connecting again is awesome to watch, it is in defence that the Cowboys have ‘bucked’ up. In 2010 they were appalling, allowing a league-worst 27.8 points past them each week. It became utterly embarrassing at times.

But now – with Dallas Johnson and others having a real dig – they rank fourth in the NRL with just 17.2 getting by them. That’s more than 10 points a match difference.

The Sea Eagles have been a bit of a ‘sleeper’ so far. They are playing well, without Brett Stewart once again, but have yet to really hit their best form.

For the Manly boys the key change from last season has been metres conceded. In 2010 opposition teams were punching out 1345 metres a week against the Sea Eagles, giving themselves reasonable field position. This year the Sea Eagles are stopping teams in their tracks and are ranked second in the NRL, allowing just 1223 metres each week.

The Bulldogs have improved dramatically, thanks to some off-season recruits and a better attitude. They are actually better across almost every major statistical area by a tad here and there, and the all-around change has elevated them into premiership calculations.

Perhaps the most crucial number to pinpoint, however, is their missed tackles.

In 2010 the Bulldogs missed 36.4 tackles a match, ranking them 13th in the NRL and making life very difficult. So far in 2011 they have improved this number to 30 misses a match and are now ranked sixth.

The Wests Tigers are pretty much ‘thereabouts’ so far this season. They’ve had some great weeks – like last round’s demolition of Canberra – and some poor weeks – like when they were never in the hunt against Brisbane.

Stats-wise they are fair to middling; but a reason for their inconsistent performance could be their drop in long-range try-scoring. In the 24 regular season matches last year the Tigers scored 21 tries from over halfway – almost one a game. This season they have just three from eight games. Considering their metres are also down to 1273 from 1358 last year, you can see how being less potent from distance could pose a problem moving forward. Clearly they are missing Lote Tuqiri…

For the Newcastle boys it has been a patchy start to the year. They had a great opening but have had some rough losses and injury struggles since. Despite some curve balls thrown their way, they are performing better than last season, with the main factor being a cut in errors.

Last season the Knights were one of the worst teams in the NRL with 12.8 errors a match. So far in 2011 they are at 11.2 errors a week, which ranks them third best in the NRL, behind just the Dragons and Storm. If they continue this trend and have some luck injury-wise they may stay in the top eight. 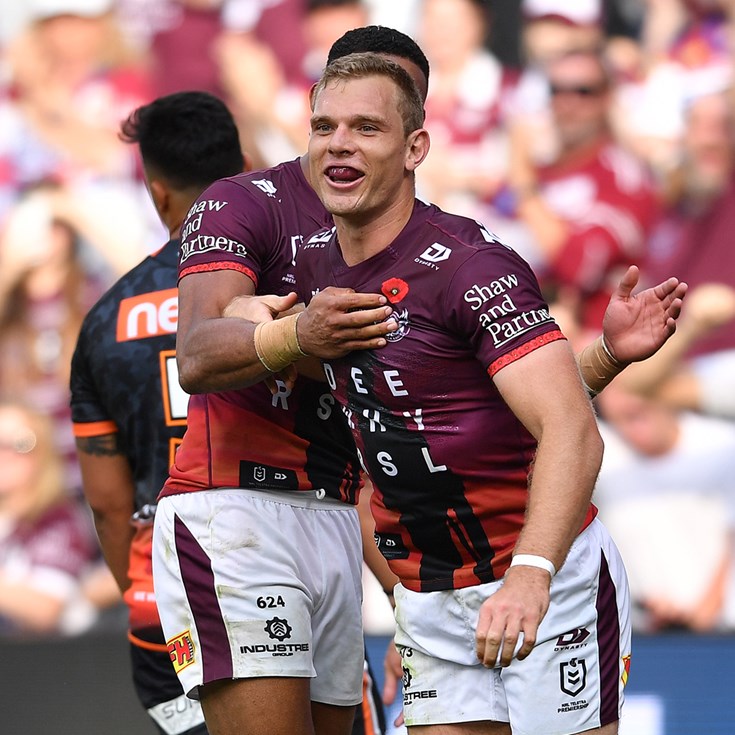