When our big end of season matches roll around it is invariably the time that the game’s best players rise to the occasion.

They thrive on the atmosphere, pressure and opportunity that finals football provides and the chance to stamp their class when it really matters.

Clubs expect their high profile players to be at their best and that is why the likes of Darren Lockyer, Billy Slater, Benji Marshall, Johnathan Thurston and co are so heavily linked with their respective team’s chances of ultimate success.

It was somewhat refreshing then that it was a number of different surnames who captured the headlines coming out of our first weekend of finals.

It began at ANZ on Friday night where the Tigers recorded a club record 9th straight victory by overcoming the reigning premiers St George Illawarra.

They had plenty of stars, with Liam Fulton’s non-stop performance earning him deserved man-of-the-match honours.

However another effort full of significance was that of fullback Tim Moltzen.

The Central Coast junior is the missing piece to the Tigers’ puzzle and has established himself as their best option in the number one jersey since donning it back in round 19.

For the majority of the season the experienced Wade McKinnon was the preferred option at the back but ongoing hamstring problems saw him struggle for consistency and led to uncharacteristic mistakes.

Coach Tim Sheens had opted for Moltzen’s utility value and used him as a halfback, centre, interchange as well as a fullback throughout the first 18 rounds.

However things have really clicked since he became the full-time custodian and it is no coincidence that the Tigers have found their best form with the current configuration.

Whilst Moltzen has often been used in the halves during his career it has been the success of his running game that has really caught the eye.

In recent weeks he has carved the opposition with his timely and incisive carries and his combination with Benji Marshall continues to flourish.

Tim Moltzen sets up a Beau Ryan try against the Dragons

Whilst Steve Price is obviously focussed on helping Wayne Bennett defend the title with the Dragons’ this year I’m sure that deep down he is excited by the type of form one of his new recruits for next year is currently displaying. Moltzen is certainly throwing down a gauntlet to other contenders when it comes to the vacancy that will be left by Darius Boyd.

In Brisbane on Saturday night the Broncos were outstanding in racking up 40 points against the Warriors, a team they had pipped by just one point five weeks earlier.

There had been much speculation as to how the Queenslanders’ chances would be harmed by the loss of forward leader Sam Thaiday.

The Broncos young guns grabbed the initiative to put the New Zealanders to the sword with none more damaging than the 2010 Rookie of the Year Matt Gillett.

The immensely talented firebrand missed a large chunk of the middle of the season with a serious foot injury but made an immediate impact following his return. In just his second game back he reminded everyone of his great footwork and speed for a big man by scoring the match-winner against the Eels in round 17.

Against the Warriors he reproduced a similar effort by beating four men to put skipper Darren Lockyer over for a spectacular try leading into half-time.

See Gillett run in a try against the Eels

Despite starting off the bench, Gillett managed in his 53 minutes on the paddock to back up that try assist with five other tackle breaks and was a constant menace with his ability to offload.

If there is a silver lining to the black cloud of injury, it may well be how fresh Gillett looks going into these final games.

The same applies to the “T-Rex” Tony Williams, who on the same night but south of the border was a leading contributor in Manly’s demolition of North Queensland.

Since moving across from Parramatta the former winger/centre has had his own injury problems but when fully fit there are few more damaging players in the game.

Holding him back was a rather lackadaisical approach to his football but a strong coach in Des Hasler and a move to the back of the scrum combined to transform the young giant into a consistent first-grader.

In fact since the move he is often called upon to play the full 80 minutes and that was again the case last Saturday night.

His ability to score rampaging tries has always been obvious but it was his no-look sleight of hand pass in the lead-up to Brett Stewart’s second try that caught everyone by surprise. Such plays are normally associated with Cooper Cronk or Benji Marshall, so it may well be there is a halfback lurking inside his big frame as well!

Williams sends Stewart through a hole against the Cowboys

Williams crashes over against Brisbane

In the absence of suspended lock Glenn Stewart the input of Williams becomes even more pronounced, and his involved performance against the Cowboys can only add to the confidence of the 22-year-old.

Finally on Sunday afternoon the Melbourne Storm had few problems holding a plucky but miss-firing Newcastle at bay to add to their imposing home record.

All their big guns (except Adam Blair) were back on deck, and after building up an 18-point lead they were never really in trouble against a Knights outfit that never gave up but were outclassed.

As usual Cameron Smith, Billy Slater and Cooper Cronk led the way but their path was made easier by the damaging work done by Sika Manu.

The granite-like back-rower is a powerhouse on the left edge and demands the attention of three or four defenders on every hit-up. He has the ability to pop a pass and with so many already drawn out of the defensive line there is usually some space provided for his teammates.

One of the biggest problems for a prospective tackler is just how to handle his square frame. If you go high you are taking on immense upper body, go low and his hips and legs are like tree trumps and there doesn’t seem to be any middle.

Manu busts through the Newcastle defence

Manu crashes over for a try against the Knights

When Ryan Hoffman, Jeff Lima, Brett White and Aiden Tolman departed at the end of last season the void was intelligently filled by lower profile imports, but the constant go-forward influence was always maintained by Manu.

There’s nothing flash about him but then that’s left for others better equipped in the Storm team to take care of. 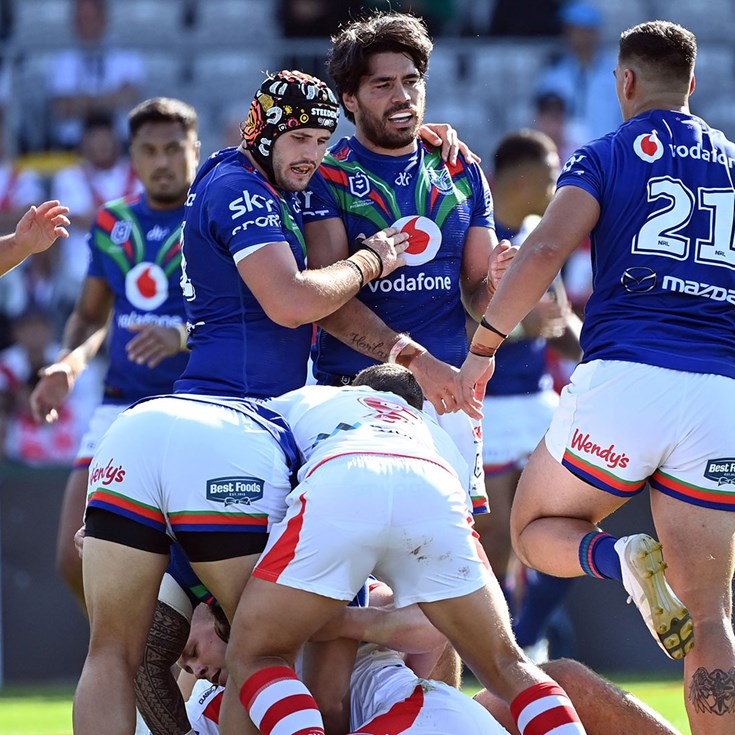