It took a decade of the Broncos beating up on North Queensland before their meetings developed into a genuine rivalry and it was 10 years after that it become the most celebrated confrontation of the modern era.

It will be exactly 10 years and one day on Friday since the Broncos first faced up to the Gold Coast Titans at Suncorp Stadium to herald a new era of south-east Queensland clashes but a decade after the newcomers upset the establishment 28-16 there is little sense of the intensity that defines sport's greatest battles.

‌That could all change this Friday however as a Titans team boasting four former Broncos and a Brisbane team bolstered by two Gold Coast acquisitions face off for the first time since their controversial finals clash that ended the Titans' 2016 season.

The match was littered with questionable calls including a penalty try award to Jordan Kahu, a penalty against Mead when he was contesting a bomb opposite Corey Oates and James Roberts not being penalised for kicking out at Titans forward Ryan Simpkins after which the Broncos scored from the very next play.

In the aftermath the referees who officiated the final, Gerard Sutton and Gavin Badger, were both demoted for the following week's fixtures as Titans players, officials and fans were left seething in their perception that the Broncos were treated favourably.

"It was a funny game. It pretty much went the Broncos way," Titans centre Konrad Hurrell said this week.

"We were trying so hard but the refs were doing their calls and we can't say anything about it. We were trying hard but everything didn't come our way."

Karl Lawton will meet the Broncos for the first time in the NRL on Friday night and after admitting that he grew up hating big brother Brisbane – "Yeah I guess you could say that" – said he found it difficult to watch the final unfold as he nursed his broken ankle back on the Gold Coast.

"It was a tough one, but a couple of decisions went the wrong way," Lawton said.

"It was a tough thing to watch. I felt sorry for the boys, not getting the result but that's footy I guess."

But with a decimated injury toll and a three-match losing streak that threatens to derail their season the Titans are again struggling to get any respect from their more seasoned opposition.

Acknowledging the difficulties the Titans have faced in the first six weeks of the season, Broncos backrower Sam Thaiday said that the biggest threat to Brisbane losing was their own mental preparation.

"We'll probably be our own biggest threat if we don't show up so we'll have to make sure that we do that," Thaiday said.

"That's the biggest threat for us, going into this game. We can't be complacent.

"I'm sure they'll be ready to play, whoever that is."

The Broncos have a right to be cocky after dominating the Titans in recent times, winning the past five clashes against their southern cousins and winning 15 of the past 18 meetings between the two sides.

Their 26-18 win 10 years ago is to this day the only time the Titans have beaten the Broncos at Suncorp Stadium and in the 10 games at the venue since the Broncos have enjoyed an average winning margin of 17.1 points.

On the two occasions that they have met in the Telstra Premiership Finals Series it has been the Broncos who have emerged victorious, the sixth-placed Broncos upsetting third-placed Gold Coast 40-32 in Week One, 2009 and last year's 44-28 affair that incredibly matched the total number of points scored of seven years prior.

Rivalries thrive when the battlelines are close and the score lines even closer and Titans coach Neil Henry knows his side are the only ones who can arrest the current imbalance of power.

"The rivalry is real because they're just up the road," Henry said. "Obviously the teams that dominate, the Cowboys and the Broncos games, they've been fantastic now for several games where there has been such a narrow margin every time they play.

"We've had a couple of good games against them but we probably haven't had that quality. It is a rivalry but time will tell when we get to that stage where we're knocking them off.

"It will be new to some of the guys but for the guys that have played before it's a big game for them.

"It's a great atmosphere and it is a rivalry. The Brisbane people that go along are seeing two Queensland teams having a crack at each other and hopefully we can get a few busloads of our supporters up there making a bit of noise as well.

"Our last memory was a disappointing semi-final exit which was controversial. That was a tough game of footy and we were in it for large parts of the game so hopefully we can go one step further and get a win."

The rivalry demands it.

1. Broncos 40 def. Titans 32, Qualifying Final, 2009.
With their season on the line the Broncos bolted out of the blocks at Robina to lead 28-10 at half-time but the Titans fought back to trail 34-32 as the clock counted down. But with five minutes to go their comeback was quashed when Dave Taylor took an intercept and ran 34 metres to score as Titans players were shouting for the game to be stopped due to a head knock suffered by Mat Rogers.

3. Broncos 25 def. Titans 21, Round 24, 2008.
A see-sawing contest that was locked up at 21-all after 80 minutes courtesy of Darren Lockyer and Scott Prince field goals respectively, Lockyer set up the match-winning try for Greg Eastwood in golden point despite almost withdrawing from the game on game day due to illness.

4. Broncos 19 def. Titans 18, Round 17, 2007.
The Broncos balanced the local ledger 12 weeks after their first meeting, a Darren Lockyer field goal needed to separate the two teams in front of what is to this day the largest crowd at a Broncos-Titans game.

5. Broncos 44 def. Titans 28, Elimination Final, 2016.
The fifth-placed Broncos were favoured to handle a Titans team that had shown great courage all year to qualify for the finals but the match was full of high drama. The Titans opened the scoring through Chris McQueen but six tackles after a scrum-feed to the Titans 10 metres out from Brisbane's line was overturned by the video referee the Broncos scored, setting a pattern that would play out for the remainder of the game. 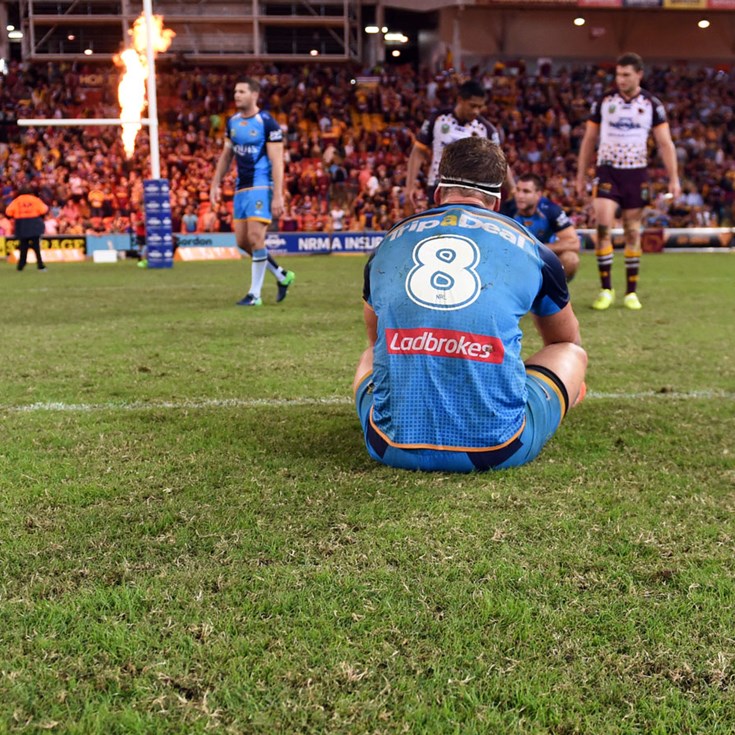