Despite a large number of Origin representatives unavailable for the Melbourne Storm and North Queensland Cowboys this Saturday, both sides still possess major superstar talent in what shapes as an intriguing contest.

For Storm fans, it presents as an opportunity to see a glimpse of a promising future after the "Big Three" era with Billy Slater, Cooper Cronk and captain Cameron Smith all earning selection for Queensland in next Wednesday's Origin II.

While it's a chance for many of Melbourne's developing players and rising youngsters to showcase their potential and stake their claims for a regular first-grade spot, the Cowboys are determined to manage a victory on the road without their inspirational playmaking captain Johnathan Thurston.

With Thurston, Michael Morgan, Gavin Cooper and Coen Hess on Origin duty, it will be up to the likes of new halves pairing Kyle Laybutt and Ray Thompson as well as Lachlan Coote and Jake Granville to achieve a crucial win for the visitors.

For the top-of-the-table Storm, they will be without Maroons stars Smith, Cronk, Slater, Will Chambers and Origin debutant Tim Glasby as well as injured duo Jordan Mclean and Cheyse Blair.

However they are not short on talent with dynamic halves duo Cameron Munster and the newly the re-signed Ryley Jacks in support of Jesse Bromwich, Tohu Harris and Dale Finucane.

The two teams aren't strangers to each other with Melbourne and North Queensland reaching great heights in recent times – and both sides will be motivated to make the most of the occasion this Saturday.

‌Why the Storm can win: The Melbourne Storm (11-2) have been the benchmark team of season 2017, enjoying a handy four-point buffer atop the ladder after a three-game winning streak. They are riding a wave of momentum, celebrating five of their players' Origin selection for Game Two including Slater's long-awaited return for Queensland and Glasby's anticipated debut. Their selections are reflective of Melbourne's impressive performance this season. Coach Craig Bellamy has instilled plenty of confidence and trust throughout his team – ensuring their ability to handle Origin without his key leaders. This was shown as the Storm thumped Newcastle 40-12 without Smith and then defeated reigning premiers Cronulla Sharks 18-13 on Thursday without Cronk. While they will also be missing McLean (broken cheekbone, out for four weeks) and Blair (minor ankle surgery, out for three to four weeks), their "next-man-up" mantra safeguards their consistent performance no matter who is in the side.

With the second-stingiest defence and fifth-best attack in the competition, the Storm boast a premier forward pack with Bromwich, Finucane, Felise Kaufusi and Nelson Asofa-Solomona leading the way that will cause the Cowboys night-long headaches.

Why the Cowboys can win: The Cowboys will take much confidence after a 32-6 dismantling of the Parramatta Eels in inspirational captain Thurston's return in Darwin last week. It marked back-to-back wins with the side shaping as a potential top-four contender. Before Thurston's return to the side, North Queensland managed a 3-3 record in his absence since Round 6.

It's the first time the two sides meet since Week One of last year's finals when the Storm escaped with a narrow 16-10 win over the Cowboys at AAMI Park. In Round 21, North Queensland also pushed Melbourne to the limit without Thurston before falling 16-8 in Round 21 at Townsville. The Cowboys will take plenty of self-assurance knowing they can match up with the powerful Storm, who could struggle without their stars. It's a huge opportunity for emerging talents like Ben Hampton and Javid Bowen to prove themselves, as well as named-reserve Kalyn Ponga who could receive a late call-up to the side.

Key match-up: Dale Finucane v Jason Taumalolo. Watching these two go at it is worth the price of admission alone. Finucane and Taumalolo are central to their respective side's chances of victory. With an impressive start to the season, Finucane was an early candidate to earn Origin honours for the NSW Blues. He is a tireless warhorse for the Storm, averaging 33.5 tackles per game and running over 100 metres, playing in all 13 games. Taumalolo is the NRL's latest million-dollar man, and for good reason. In the Kiwi representative's 11 games played for the Cowboys, he has run for almost 200 metres in every match (198.3 metres per game) while averaging 28 tackles. Whoever wins this match-up will go a long way in their respective side's chances at victory.

‌
History: Storm v Cowboys: Played 33; Storm 23; Cowboys 10. While the Storm hold the historical advantage it would be illogical to take too much of the past into consideration in this week's affair, particularly with the Cowboys missing Thurston. Melbourne have won their past three encounters since 2015 – when North Queensland won the preliminary final before capturing their first premiership. The Cowboys have also lost their past three matches at AAMI Park and last won in Round 19, 2012.

What are the odds: This is the most even betting game of the round according to Sportsbet. The two sides are literally going dollar for dollar in popularity in the head-to-head market and neither side has been confidently backed to win 13+ so expect a tight one according to the money trail. Latest odds at sportsbet.com.au.

NRL.com predicts: Even without nine Origin stars lining up, it will still be an absorbing contest between two of the NRL's powerhouse sides. Coaches Craig Bellamy and Paul Green are two of the best in the business and the Storm and Cowboys are the professional envy of many in rugby league. Playing at home and holding the advantage between the two bustling forward packs, the Storm will get over the line. Melbourne by 10. 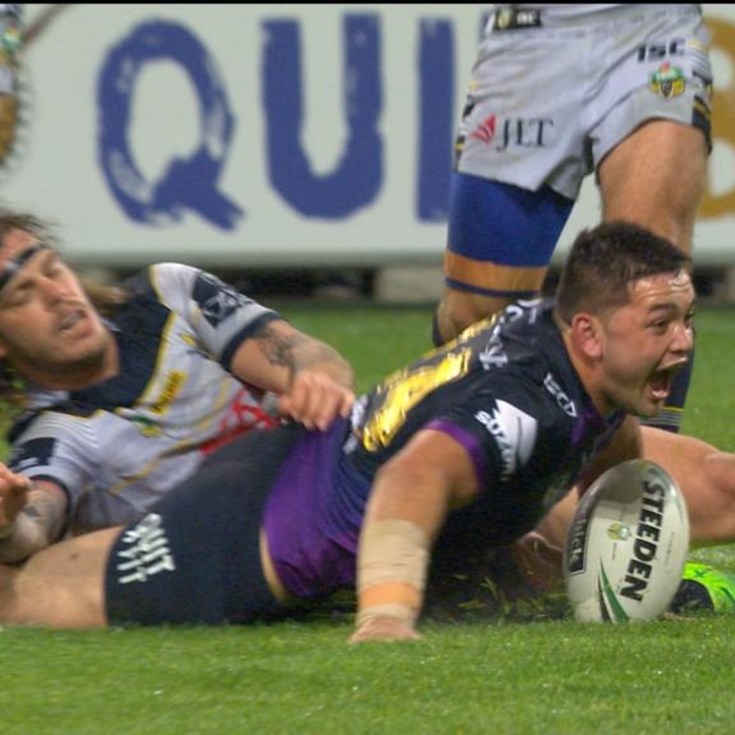