With a background in indoor volleyball and Rugby Sevens, Tallisha started playing rugby league in 2013.

She represented the Indigenous All Stars from 2014-2016, captaining the team in the last two years.

Away from Rugby League, Tallisha is a speech pathologist at the Institute for Urban Indigenous Health.

Presented by
2 weeks ago

The Broader Game: Indigenous side gets green light for National Champs 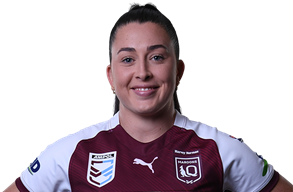