When it comes to game analysis and rugby league strategy, there are few who rival the passion and experience of Peter Sterling.

First a game-breaking player at the highest level, now the brains behind the Channel Nine commentary team - it's fair to say 'Sterlo' has earned the right to have an opinion.

This season, footy fans, we'll get a chance to delve into the mind of the man himself.

And what a way to kick it off, with an in-depth analysis of the NRL's new "downtown" rule crackdown and the players it will most affect.

Once you've read the column, check out the video package above to see examples on the field of play.

'Sterlo' is now a permanent member of the NRL.com team. Stay tuned for his column each and every Wednesday throughout the season.


We have indeed been privileged to have some of the greatest ever attacking fullbacks displaying their wares in the NRL over recent seasons.

The likes of Jarryd Hayne, Billy Slater, Matt Bowen, Brett Stewart, Wade McKinnon and co. have been potent forces at the back at a time when fullbacks handle the football almost as often as their halfbacks.

If you’ve marveled at their blinding speed and evasive running then get set for even more excitement with an opportunity for them to reach even greater heights in 2010.

This season, as a result of a stronger policing of an existing rule, a team’s back three will be afforded more time and space in which to operate.

Referees boss Robert Finch has announced that from round one his dual whistleblowers will be cracking down on chasing teams in their pursuit of “downtown” kicks.

To paraphrase the rulebook it says that when a player kicks the ball, those in front of him in an off-side position can’t proceed past the play-the-ball until the ball has gone over their heads.

Despite this rule our referees have generally been prepared to allow chasers a substantial head start in their desire to get downfield as quickly as possible. That is why we have so often seen kick catchers immediately ringed by opposition players who’ve arrived almost before the football.

This will no longer be case.

With dominating field position such an important team tactic, along with nullifying the opposition kick return, an effective chasing team is paramount.

That has been achieved by placing a fast moving brick wall of defence immediately in the face of the man catching the ball. Fortunately, this season that wall will be harder and take longer to build.

As with all rules, our refs will need to officiate with discretion and common sense as to when to penalise. In this instance, the important consideration will be intent.

If a player ambles past the play-the-ball in an off-side position then it will be preferable for play to continue. However, if it is obvious that those passing the ruck early have the sole intention of sprinting down to “corral” the catcher, then they need to be pulled up.

It will be of great interest to see how this subtle but welcome change in interpretation will affect each team’s crucial kicking games. For some, it shapes as a more profound change than for others.

For example, on face value it would seem that the Dragons will find it a more relevant hurdle than the Bulldogs. That assessment is made purely on the fact that Jamie Soward kicks the ball from a much deeper position than Brett Kimmorley.

It’s fair to say that Jamie actually launches the ball from further behind the dummy-half than anyone. It’s a sign of the quality of this part of his game that he is still able to find open spaces so regularly.

Now there will be even more pressure for him to do so. By being so deep, it obviously takes longer for the ball to be kicked back over the play-the-ball. That will result in his Dragon teammates being forced into some sort of holding pattern before they can head off in earnest.

Not so the Bulldogs, who are used to their main man Kimmorley being flat and kicking the ball through the opposition line. It would seem that this approach will need very little adjustment.

They are also extremely well placed with a competent kicker in Michael Ennis operating out of dummy-half.

One way that teams will look to modify their last play option is to kick more often from that area so that all chasers are automatically on-side.

It’s a salivating prospect that Jarryd Hayne and Jamie Soward will be matching wits as part of our kick off to the new season on Friday night.

Despite both their clubs playing finals footy in ’09, the Eels and Dragons will view last year’s campaigns with a large degree of disappointment.

Sure, Parramatta’s late surge into the Grand Final was remarkable and full of emotion but going so close to the title, only to miss out, is a gut-wrenching experience. Especially when they look back knowing that they had a real chance of toppling Melbourne, and that it was just a couple of key plays that cost them so dearly.

As runners-up and boasting strong recruitment, the Eels will carry some heavy external expectation this year. I don’t believe they are premiership favourites, but I’m cautiously optimistic of their chances.

Unfortunately for St.George Illawarra, they bowed out meekly last season after looking the best team for the majority of the year.

Having said that, it is completely wrong to say they “choked” which is a term that angers me when used in the wrong way or at the wrong time.

In sporting terms to “choke” is to internally surrender. It’s a complete loss of nerve so much so that physically a competitor is almost unable to function.

The best (or worst) example was hapless Czech tennis player Jana Novotna in her 1993 Wimbledon Tennis Final against Steffi Graf.

Novotna led 6-7, 6-1, 4-1 and 40-30 before the prospect of winning became more terrifying than losing. In the end, she could barely hit the ball over the net and within 15 minutes Graf had swept to victory.

This is a far cry from the Dragons’ effort, though granted were unable to rise to the occasion when it really counted. Every club went through a bad run and they saved their least effective football until last.

There’s little doubt they suffered a late loss of confidence which was evident the last time these two sides met.

In that qualifying final, the Dragons pounded the Eels’ line for the opening 20 minutes without being able to cross. Upon receiving a penalty, they opted to take the two points with Parramatta almost out on their feet.

In my opinion, this was a pivotal moment in the St.George IIlawarra season which gave the indication they were vulnerable.

They went on to lose 25-12 and the following week became the first minor premiers under the McIntyre system to bow out in consecutive weeks.

It didn’t help their cause that Jarryd Hayne scored the best individual try I’ve seen during my 16 years of commentating.

Canberra’s Brett Mullins’ double chip and regather against Newcastle in 1994 is right up there but Hayne’s mercurial 30 metre burst to beat half the Dragon’s defence was out of this world.

It gives me great confidence that the decision-makers in our game are understanding the importance of allowing such athletes to best perform.

Any interpretation that allows a player to field the ball and have up 20 to 30 metres in which to create some magic has to be applauded. Robert Finch has got this one right. 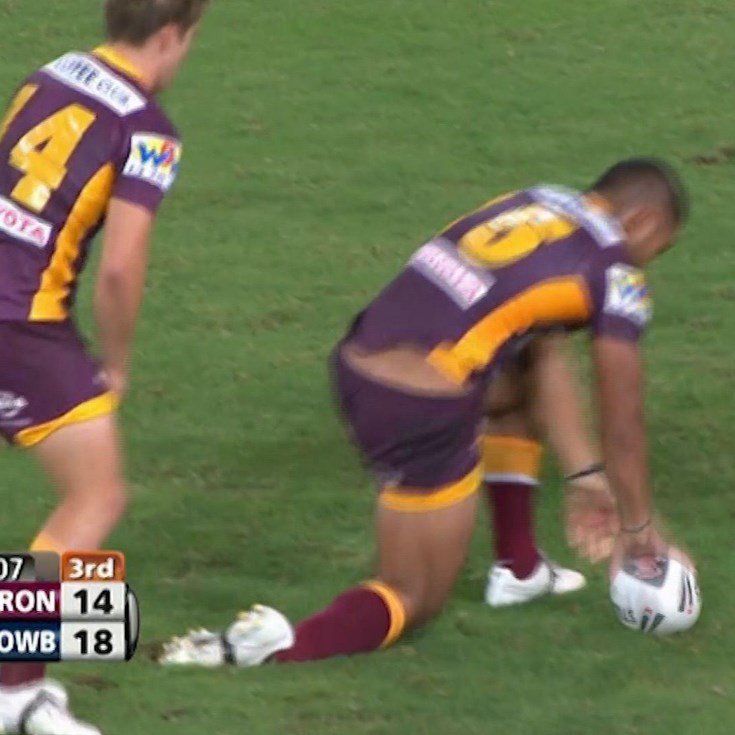