I didn't think I would be saying this right now but Gold Coast suddenly look a team ready to rip in and play semi-final football again. I watched the Titans earlier this season and, let's be honest, they were horrible. They have a robust roster but looked lost and disinterested.

Out of the blue though they have won three successive games and look a different side to the one I saw play two months ago. I saw them beat Newcastle a fortnight ago but the hapless Knights aren't the best gauge at the moment.

Last weekend though I watched closely as Gold Coast defeated North Queensland - and the Titans were damn impressive.

There are signs of life once again on the Sunshine Strip.

Gold Coast won their first match of the season in round one but then lost five in a row. Saying they were a basket case would be too heavy but there looked to have been a lack of excitement from some of their big names and a couple of key players with careers on the downhill slide.

How things have turned around at Robina.

North Queensland threw plenty at Gold Coast last weekend but the Titans were so enthusiastic - it was by far their best performance of the season.

To me, it looked as though Gold Coast had two more players on the field. That's how dominant they were. If the Titans can string together a few more wins, who knows how far they can go in this premiership?

I know one thing - they are playing good enough footy to be inside the top eight. Prince has bounced back to form and they have arguably the finest back row in the NRL. Greg Bird, Nate Myles and Ashley Harrison were the best players on the field in State of Origin I down there in Melbourne.

Aidan Sezer has really lifted the Titans since arriving from Canterbury late last year. He looks good, and has the game to compliment that of Prince; he’s a good runner of the football and has a strong kicking game. Sometimes one player can waltz into a side and increase the entire tempo.

Sezer has done just that.

Speaking of Prince, there is no doubt he has struggled for the past 18 months.

I say that with all due respect because I know exactly what he can produce. He has meant so much to the Titans, and for the first four years the side's attacking game was built solely around the number seven. And why not? It was a joy to watch him pull apart and mesmerize defences with his skill. That all seemed to have deserted him over the last season and a bit and I did think that, at 32, we were watching his career drawing quickly to an end.

The performance on Friday night however was a reminder that there’s still some of that classic Scotty Prince left for us to enjoy. He knows running the ball is the key and for the first time in a while there was that confidence, it was great to see him getting at the Cowboys defence and generally looking as sharp as ever. He’s had some tough times through his career, suffering a number of shocking injuries, but this latest battle with his form threatened to finish him prematurely. It’s great to see him back.

Rugby league needs a strong club and presence in south-east Queensland for that reason let’s hope the resurgence continues. Look, it is only three games in a row but confidence is everything in rugby league.

Based on the Cowboys game, Gold Coast look a side ready to live up to the form there roster should be delivering. They copped some heavy-duty criticism last year and at the start of this season - and most of it was warranted. But now it looks as though they have turned the corner. They deserve a few plaudits.

LIKE everyone in the game I was stunned to hear that David Gallop had left the NRL. It seems Gallop and the NRL commission agreed mutually that the ten-year CEO should move on.

Gallop had a bloody hard job.

He had to answer and please a multitude of boards over the years - and did so with some fine results. Sure he attracted some criticism but David was in charge through some extremely difficult periods, the most contentious being stripping Melbourne of two premierships for salary cap rorting.

Rugby league can throw up some weird and wild scenarios and Gallop faced up to each and every one of them like a true professional. Gallop was the man that helped bring a fractured game together after the Super League drama.

That will be one of his great legacies.

NSW selectors made just two changes to their side for Origin II - Anthony Watmough and Tim Grant in for Tony Williams (injured) and Jamie Buhrer.

It is a well-rounded and powerful Blues side. I like it, although Queensland has yet again experienced a settled build-up.

ANZ Stadium will be packed to the rafters on Wednesday night and I reckon NSW can level the series. I will give my full analysis of the game in next week's column here on NRL.com.

Let's hope NSW take it to a decider. 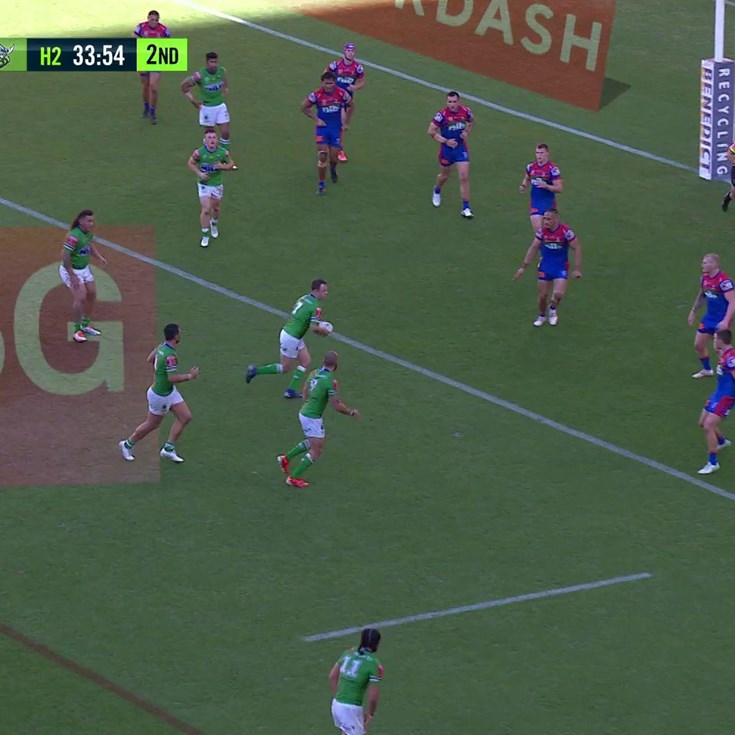 Papalii storms over after the Raiders keep the ball alive