Points-challenged St George Illawarra enter this return clash with the Bulldogs at the crossroads of their season. Blown off the park by a rabid ’Dogs unit just two weeks into 2012, the Dragons need to quickly turn around their fortunes or they’ll find themselves with only limited opportunities to regain their confidence and make a run through the logjam of other hopeful semi-finals contenders.

The 2010 premiers have recorded just one win, a 14-12 victory over the Eels, in their past five games to drop to 10th place on the NRL ladder – a world away from the corresponding stage of the 2011 season when they were runaway leaders at the halfway mark. They are struggling to execute in attack and currently average the second-fewest points in club history.

Sure, their defence remains stout, conceding the fewest line-breaks and the fourth-fewest points overall, but until they rack up a few big scores and confirm they can be creative in a variety of ways, they’ll remain up against it.

This week marks a real challenge: Des Hasler has the Bulldogs humming rounding the midpoint of the season. They’ve won three in a row and four of their past five; last outing they were strong winners over Souths and they dominated the Sharks 26-2 in Round 11.

After resting up with their first byes last week, both sides will be sweating on the fitness of Origin representatives, with Dragons coach Steve Price crossing his fingers his impact forwards Ben Creagh and Trent Merrin will be good to go after turning out for the Blues on Wednesday night, while Des Hasler will monitor Josh Morris’ recovery.

Alas, Dragons fans hoping for some home ground advantage as their side attempts to avert losing to the blue-and-white twice in season for just the third time will be sorely disappointed to learn the Bulldogs have won four of five games played in Wollongong and have had their colours lowered there just once in the past 20 years!.

The Dragons have just the one change to the team beaten 20-8 by the Sea Eagles in Round 13, with Dean Young to start at lock in his 200th NRL game. He joins his dad Craig (234 games) in the double-century club.

Meanwhile coach Des Hasler has reshuffled his backline following the season-ending shoulder injury to centre Tim Lafai, with Luke MacDougall promoted to the wing and flavour-of-the-moment Krisnan Inu shifted to the centres. Greg Eastwood rejoins the team at lock with David Stagg hitting the pine.

Watch Out Dragons: The Bulldogs offloaded often to destroy the Dragons last time they met and are certain to adopt similar tactics. They made 15 offloads in their 30-4 win in Round 2 and since then have asserted their dominance in the NRL, ranking No.1 for second-phase play with an average of 14 per game. Forwards Sam Kasiano (23) and Frank Pritchard (18), five-eighth Josh Reynolds (22) and fullback Ben Barba (20) will pose the major threats.

Josh Morris tore apart the Red V in Round 2, scoring three tries and making 15 runs, two line-breaks and nine tackle-breaks. He’ll look to isolate Dragons’ skipper Ben Hornby on the left edge, as he did last time they met.

Props James Graham (average 117 metres) and Aiden Tolman (average 120 metres) will be relentless in their involvement – they rank fifth and sixth among all players for hit-ups, with 207 and 202 runs respectively.

Kickers Jamie Soward and Ben Hornby need to be mindful of Michael Ennis charging down their clearances – Ennis leads the comp with five.

With the likelihood of a heavy playing surface the Dragons’ goal-line defenders need to be alert to grubber kicks into their in-goal. Canterbury have scored 12 kicks from tries while the Dragons have conceded 14, the third most overall.

Danger Sign: The Bulldogs’ backline breaks more tackles than any other, with Ben Barba (69) leading all-comers in the NRL. Josh Morris (50) and Josh Reynolds (44) are threats too. In particular if any one of these three punches through inside the Dragons’ side of halfway, something could be brewing: the Bulldogs have crossed for 18 tries that have started with runs 21-50 metres out from the opposition try line, easily the most in the comp.

Watch Out Bulldogs: Where have the 2010 and 2011 Dragons gone? Des Hasler will be hoping they don’t awaken from their funk this week. They’re certainly capable, but to date many of their players are mere shadows of the stars who dominated the past few years. But all it takes is a cohesive movement, a bit of confidence, and things can turn around. Brett Morris, Jason Nightingale, Nathan Fien, Ben Hornby, Beau Scott, Dean Young and Matt Cooper have each played international football, while Jamie Soward has played State of Origin for NSW. If the ’Dogs drop their guard and start making some mistakes, these senior players will lift.

Although the Dragons have struggled to execute crisply down their left side so far they can get a confidence boost this week: the Bulldogs’ right-edge defenders have conceded 15 tries on that side of the field compared to 11 on their left side.

Expect enigmatic Krisnan Inu to be targeted – he has a woeful record against the Dragons, winning just one of nine encounters.

Danger Sign: Ben Creagh has not been used to full effect in 2012, but he can make a huge impact chiming in down the left edge, in particular targeting the suspect defence of Bulldogs five-eighth Josh Reynolds (58 missed tackles – second most by any player). If Creagh is used as a decoy a couple of times inside the ’Dogs’ 20-metre zone, you can bet it will be just a matter of time before he gets the ball himself, off either Jamie Soward or Ben Hornby.

Brett Morris v Ben Barba: Two devastating broken-play runners who can ignite their teams when there’s nothing seemingly on offer. If it weren’t for Morris’ contributions at the back the Dragons would be in even greater pain – he’s their go-to man, ranking third in the NRL for runs (224). Plus he has scored four tries, made five try assists, eight line-breaks and 64 tackle-breaks (slipping out of attempts like he’s covered in Vaseline). Barba leads the comp for tackle busts (69), has crossed for nine tries and made 12 line-breaks (3rd overall). He needs just one try for 50 in his career. Both players have promoted the footy 20 times, the second-most offloads by custodians.

Where It Will Be Won: Attack. Both sides are defending stoutly, ranked equal third for the fewest missed tackles each match (27) – but the Bulldogs (sixth in attack, 22 points a game) are scoring a converted try more than the Dragons each week (last in attack with just 14.6 points a game). Worryingly the Dragons have scored more than 14 points just once in their past five games – during which time the Bulldogs have averaged 28 points!

Also, given the likely wet conditions, attacking kicks will certainly play a role: both sides defuse cross-field kicks just 47 per cent of the time.

The History: Played 23; Bulldogs 13, Dragons 10. The Bulldogs broke a six-game losing streak when they dominated the Dragons in Round 2.

The Last Time They Met: The Bulldogs cruised to an easy 30-4 victory over the Dragons at ANZ Stadium in Round 2, with centre Josh Morris bagging a first-half hat-trick of tries.

The home side raced to a 12-nil midway through the first section of play following two tries to left centre Morris – the second featuring a beautiful in-and-away to beat Dragons skipper Ben Hornby.

The Red V posted their first points in the 29th minute when Kyle Stanley caught a miracle offload from winger Brett Morris over the try line. However the ’Dogs bit back immediately, with Josh Morris on the spot to pounce on Bryson Goodwin’s desperation inside pass for an 18-4 advantage that they took to the halftime break.

Canterbury grabbed a 24-10 lead 10 minutes into the second half when left winger Goodwin showed considerable skill to firstly grubber into the in-goal off his left boot, then beat Ben Hornby to the grounding.

The home fans found their full voice when Greg Eastwood steamed onto a Michael Ennis short ball to crash through some flimsy Dragons’ defence for a rare try under the goalposts.

The Bulldogs’ best were Josh Morris, Goodwin, Eastwood and Ben Barba (13 runs, 146 metres) while the Dragons were their own worst enemies with the ball in hand, completing just 66 per cent of their sets and making 15 errors.

The Way We See It: The Dragons have disappointed so far and it’s tough to place faith in them turning their season around this week. They’re certainly capable but even if they do get some passes to stick the Bulldogs would have to lower their standard to allow the home side any chance at victory. With Des Hasler demanding better application and focus from the ’Doggies this year we can’t see that happening. Bulldogs by six points. 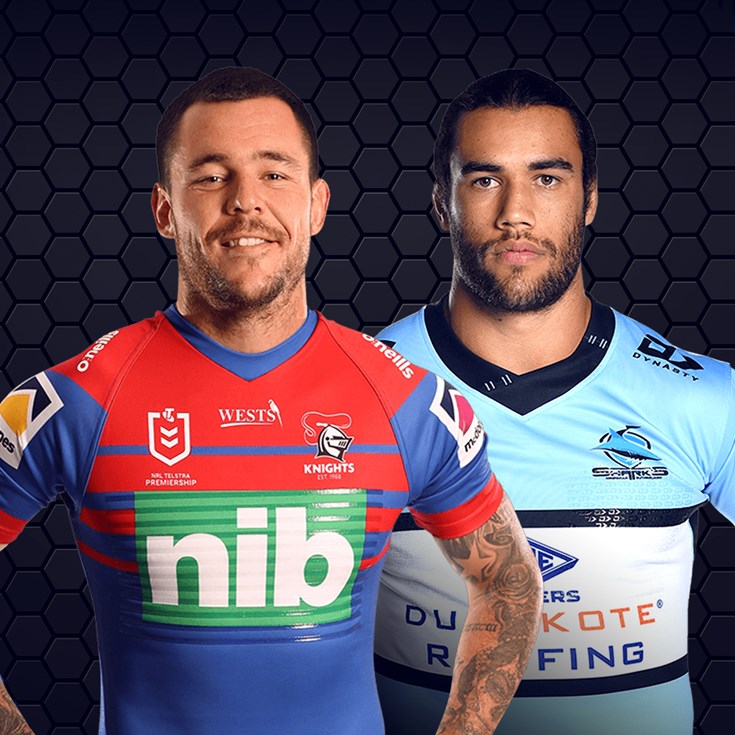