Take a look at the Brisbane Broncos road to the finals as they prepare to play the North Queensland Cowboys in week one of the Telstra Premiership Finals.

1. Off to a flyer
Despite concerns over how they would cope without retired legend Darren Lockyer, the Broncos shot out of the blocks this season with seven wins from their opening eight games and only a narrow loss to North Queensland blotting their otherwise perfect record. Brisbane scored a grinding win over Parramatta in Round 1 and added impressive victories over the Knights, Rabbitohs, Dragons, Tigers, Raiders and Titans to sit second on the NRL ladder.
2. Yow Yeh’s shocking injury
Broncos players were left shattered by the severity of a season-ending injury to Test winger Jharal Yow Yeh against South Sydney in Round 8. Yow Yeh suffered a compound fracture of his right ankle, with the bone not only snapping but piercing the skin in what team-mates described as a horrific sight. He has since undergone seven operations in an effort to have him playing rugby league again by 2013. His absence has been a massive setback for the Broncos although they’ve managed to get the job done since.
3. Kick start
The attacking kick has been a mainstay of Brisbane’s play this season – and they have been particularly fond of the bomb. The Broncos rank first in the NRL for mid-field bombs (44) and second for both regulation bombs (80) and cross-field kicks (71). They have also attempted more chip kicks than any other side with 28.
4. Lack of a Lockyer
The big question on everyone’s lips this season was how Brisbane would cope without the influence of club legend Darren Lockyer. The answer is that they’ve had mixed results. With Corey Norman thrown into the mix, they began the season stunningly well and remained in the top four up until Round 20 when the lack of Lockyer’s experience contributed to a dramatic dip in form. Coach Anthony Griffin experimented with Ben Hunt at five-eighth and Norman at fullback in an attempt to address the slide before reinstating his former combination for the final game of the regular season.
5. The Hodges factor
A fit Justin Hodges is worth his weight in gold and that’s exactly what Brisbane got this season. The Australian Test centre enjoyed his first full pre-season in a decade and the Broncos reaped the benefits as he showed all of his trademark class and aggression during Brisbane’s early charge. He remains one of the NRL’s most prolific dummy-half runners and is lethal in one-on-one situations. Hodges ranks third in the comp for offloads (48) and has contributed 81 tackle busts out wide.
6. Dummy-half running
Speaking of dummy-half running, the Broncos have produced more runs (594) and more metres (4592) from dummy-half than any other side this season. Their basic game plan is a simple one – quick play-the-balls and easy metres up the middle. They rank third for both dummy-half line breaks (10) and try causes (eight). Justin Hodges (133 runs) and Andrew McCullough (122) lead the way from dummy-half for Brisbane.
7. Post-Origin blues
Having sat amongst the competition leaders for much of the year, the Broncos returned from the gruelling State of Origin period a different side. And although the Origin stars themselves admitted they lacked energy in the weeks following the Origin decider, the younger players also suffered after stepping up to fill the gap in the absence of their senior players. The Broncos lost just six games up to Round 18 but embarked on a six-game losing streak from Round 20, only righting the listing ship with a win over the Panthers at home last Friday night.
8. Petero’s farewell
After the Darren Lockyer farewell tour of 2011, this year it has been all about Petero Civoniceva. Having returned home for one final season after four years with Penrith, Civoniceva played his 300th career first grade game in Round 16 and in recent weeks has been lauded as one of the greatest forwards of all time as he prepares to draw the curtain on his 15-season career. Notably, the veteran prop admitted after Origin that he was struggling to recover, however his influence on the Broncos’ pack remains as strong as ever.
9. The saddle shifts
The Broncos looked to have rediscovered some form with two strong performances against the top two sides in the competition, Canterbury and Melbourne, in Rounds 23 and 24. However, the fact that they were unable to hold on to big leads in both games left them relying on results in their final regular season game of the year to ensure a finals berth. They led the Bulldogs 14-0 at one stage before going down 22-14 and then led the Storm 12-0 a week later before losing a heartbreaker 19-18.
10. Safe at last
The pressure was on coming into the final week of the regular season, having lost six in a row to put their finals existence in jeopardy, but the Broncos stood tall when it mattered most. With scores lock 12-all and just five minutes remaining against in-form Penrith, rookie five-eighth Corey Norman threw a superb short ball for a rampaging Alex Glenn who charged over to score the try that cemented Brisbane’s spot in the top eight. 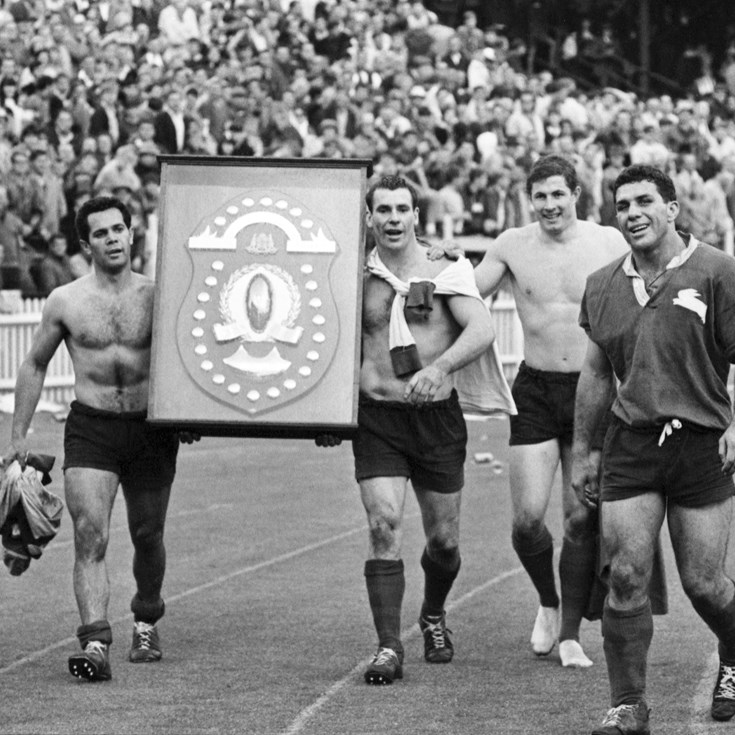