Each team has one player who can turn a game on its head and secure victory with an amazing play, and for the Broncos that X-Factor is Justin Hodges.
To celebrate the finals, NRL.com has launched a new NRL X-Factors application, where fans can vote on their favourite X-Factor in a head-to-head battle.
Check out the best moments of Hodges' NRL career and cast your vote on our new X-Factors page.
Hodges' Top 10 Moments:
1. Round 14, 2000
A 17-year-old Hodges makes his NRL debut following an injury to Wendell Sailor – becoming the youngest ever Broncos player in the process. He produces two try-saving tackles in a narrow 16-14 loss.
2. Finals Week 3, 2002
Hodges wins man-of-the-match honours against his former club as the Roosters win a thriller 16-12 to qualify for the 2002 grand final. The Roosters trail 12-8 but a resounding defensive performance helps get them home.
3. Grand Final, 2002
At 19 years of age, Hodges wins his first premiership as the Roosters come from behind to beat the Warriors 30-8. The Roosters trailed 8-6 early in the second half but piled on four tries to claim a memorable victory.
4. Round 13, 2005
Hodges torments an Andrew Johns-led Newcastle with a dazzling performance as Brisbane prevail 34-16. Hodges makes 164 metres from 15 runs, produces three line-break assists and a try assist, as well as a try save.
5. Round 23, 2006
Playing just his fourth game at fullback after being moved by coach Wayne Bennett to cover for the injured Karmichael Hunt, Hodges sets the record for most metres ever gained by a single player in a match with 346.
6. Finals Week 3, 2006
With his side trailing 20-6 at half-time in the grand final qualifier, Hodges sparks one of the great comebacks. Moved to fullback at half-time, he fields a kick in his own in-goal in the 44th minute and beats three Canterbury defenders as he slices through before sending Shaun Berrigan on a 65-metre dash to the try-line. His play turns the game and Brisbane roars home to win 37-20.
7. Grand Final, 2006
Hodges plays a starring role as Brisbane wins the 2006 grand final – his second premiership success. Hodges scores the opening try running off a Darren Lockyer inside ball and is a dominant presence throughout with 23 runs, 10 tackle-breaks and two line-breaks.
8. Round 3, 2007
Hodges equals the club record for most tries in a game with four against Penrith in an exhilarating 29-28 loss. Hodges scores in the 23rd, 31st, 44th and 48th minutes with his third a 90-metre effort after intercepting a Rhys Wesser pass.
9. Round 11, 2007
Scores two long-range tries, including a brilliant solo effort in the second half, and sets up a another with a barnstorming dummy-half run as the Broncos beat Newcastle by a record scoreline of 71-6.
10. Round 3, 2011
In his return match from serious injury, Hodges scores the winning try and breaks an 8-8 deadlock with a superb solo effort in the 68th minute. Receiving the ball one-out from a scrum, he bursts through the middle of two defenders and races 30 metres to score. It is his first try in 700 days.
Vote for the NRL X-Factor 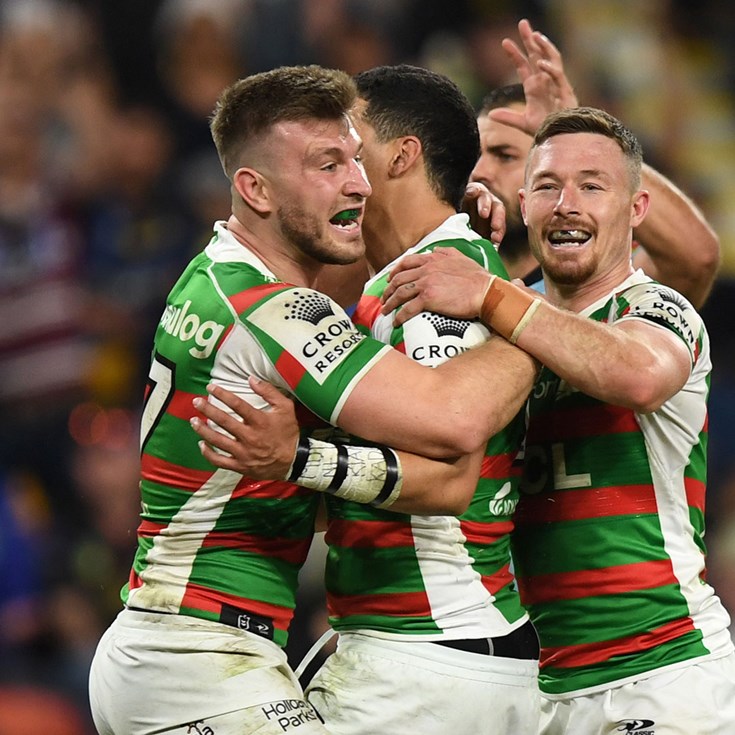