After two long and extremely difficult years since they learnt that their 2007 and 2009 premierships had been stricken from the record books, Melbourne finally exorcised their demons with a premiership win that won’t be taken away.

Their grinding 14-4 victory over minor premiers Canterbury in the grand final will officially be recognised as the club’s second title but in reality it means much more than that to the boys from down south.

Since it was discovered in mid-2010 that Melbourne management had systematically rorted the salary cap by huge amounts, they’ve been forced to spend a whole season playing for no competition points, shed countless players and face up to the fact that their extraordinary achievements of the past will, like it or not, forever be tainted.

With their ‘big three’ of Billy Slater, Cameron Smith and Cooper Cronk still leading the way, the Storm had too much class and too much experience for their rivals as they dominated the finals before ending Canterbury’s great resurgence in 2012 in the premiership decider.

They began well enough, winning their first nine games on the back of some scintillating attack and the brilliance of Billy Slater who became the first player in a century to score two tries in each of the first four games of the season.

Their run was eventually ended by Cronulla in Round 10; however it was the representative period that threatened to derail their campaign.

A knee injury suffered by Slater in State of Origin II not only ruled him out for a month but instigated a five-game losing streak for the Storm between Rounds 16-21 including a 40-12 thrashing at the hands of Canberra on home soil and shock losses to struggling Parramatta and St George Illawarra. The fact that they had never endured such a streak since coach Craig Bellamy arrived at the club in 2003 was an indication of just how far they had fallen.

But, as it turned out, that run proved to be a Godsend. While 12 months earlier they had looked solid all year before fading at the death, this time around they found themselves building as the finals approached.

Their losing streak came to an emphatic end against Penrith in Round 22 and by the time the finals arrived they were well and truly back in business with five wins in a row to secure second spot on the ladder behind the Bulldogs.

However, it was during the finals that they made their greatest statement of intent. Heading into their Week One clash with South Sydney, much of the focus had been on South Sydney and their return to finals football for just the second time in 23 seasons. Some pundits hypothesised that Souths fullback Greg Inglis could usurp Slater as the No.1 fullback in rugby league. Others pointed to the Rabbitohs’ monstrous forward pack as having the muscle to dominate their southern rivals. Melbourne put both those arguments to bed in a hurry as they raced to a 24-nil lead before cruising to an easy 24-6 win.

Manly was next – but again one of the great rivalries of the past six years failed to live up to the hype as the Storm brushed them aside 40-12.

And so it came down to Melbourne and Canterbury and another clash between Bellamy and Des Hasler. A match-up for the ages, the grand final lived up to its billing with a bruising encounter that saw both sides repel set after set in a remarkable defensive display from the two best teams in the Telstra Premiership.

But the class of Melbourne proved telling. Working behind an amazing 96 per cent completion rate in the first half, the Storm wore down their rivals with two tries to Slater and Justin O’Neill in the last 10 minutes of that opening section – both set up by Cronk – proving the difference.

And amid the joy of putting past indiscretions behind them, there were a number of side stories that made this year’s success extra special: the departure of Dane Nielsen and Todd Lowrie to the Warriors; Sika Manu finally tasting victory after missing the 2009 decider with a broken leg; Jaiman Lowe winning a premiership in his last game before retiring to a job in the north Queensland mines.

It was a win built as much on pain as it was on hard work, but most importantly, it was one built legally. And no-one can ever take this one away.

Where They Excelled… No side posed as much threat in attack as Melbourne did in 2012. Their 105 tries scored during the regular season was five more than any other team (despite ranking only third for line-breaks) and they were by far the most efficient unit when attacking close to their opponent’s try-line with 52 tries scored between 0-10 metres.

Melbourne’s right edge was particularly dangerous: they scored a whopping 51 tries on the right in 2012 – more than any other side scored on any single side of the field – with Cooper Cronk’s presence proving too much for rivals to handle.

In fact, it’s hard to go past Cronk as the single most significant factor in Melbourne’s premiership win this season, with his kicking game second to none. Melbourne were the only club to boast a success rate of better than 60 per cent when it came to finding open space with their clearing kicks in 2012, with 124 of 205 long kicks finding grass at an impressive 60.5 per cent. They also produced the most 40/20s, with six.

Where They Struggled… There wasn’t a lot Melbourne did poorly in 2012; however they will no doubt look to further capitalise on Cooper Cronk’s kicking game in the future with a better kick-chase – Melbourne’s 58 poor chases were the most by any side in the competition. And they lacked some discipline in the play-the-ball, giving away the most penalties for leg pulls (six) and the second most for holding down, with 27.

Missing In Action… Just 26 players were used by Melbourne in 2012 and, tellingly, 14 of them played 20 games or more. The major injury concern through the course of the year of course was Billy Slater, who injured his knee in State of Origin II and missed the next four games for the Storm – all of them losses. Will Chambers overcame the effects of a career-threatening blood disorder that saw him confined to a hospital bed mid-season to return in time for the finals, however there was no such luck for winger Matt Duffie (shoulder) or prop Jason Ryles (hamstring) who both missed the grand final win through injury.

Turning Point… A 46-6 thrashing of Penrith in Round 22 snapped a five-game losing streak in emphatic style and restored some of the confidence that had been eroded during the previous month. The return of Billy Slater a week earlier was crucial and although it took him a few weeks to return to his best, his presence alone helped with the side’s structures. The Storm scored in the first set of the match against the Panthers and ran in six first-half tries to set up a crucial win. They didn’t lose again in 2012.

Best Games… A 42-18 win over North Queensland at Dairy Farmers Stadium in Round 6 was particularly impressive given the quality of opposition and the difficult of facing them in Townsville. The Storm led 16-12 at halftime through tries to Matt Duffie, Kevin Proctor and Ryan Hinchcliffe and dominated proceedings after the break scoring five tries to one. Just as impressive was their 40-12 demolition of Manly in their grand final qualifier. The two sides have enjoyed a brutal rivalry since their 2007 grand final clash but it was all one-way traffic this time around with Melbourne scoring seven tries to two to cruise into the decider. Of course, their grand final effort against Canterbury wasn’t bad either.

Worst Games… Even without two of their big three in Cameron Smith and Billy Slater, the Storm would have been disappointed with their 40-12 capitulation at the hands of Canberra in Round 18. Melbourne were on the back foot from the outset, conceding two quick tries early and four in each half to suffer their biggest loss of 2012. Usually a solid defensive unit, the Storm were torn apart out wide, with Canberra’s right-edge combination of Blake Ferguson and Sandor Earl having a field day and young winger Edrick Lee scoring a hat-trick.

Hold Your Head High… Everyone. Let’s face it – premiership teams aren’t built on just one or two contributors. But it’s hard to go past Cooper Cronk who enjoyed arguably his finest season to date. Cronk’s kicking game was immaculate and he also added 32 try assists and 26 line-break assists. Back-rower Ryan Hoffman was sensational on the left edge, averaging 113 metres and scoring a career-best 10 tries. And it was an impressive breakthrough year for winger Sisa Waqa who was called in to replace the injured Matt Duffie and not only filled his shoes but became a significant contributor out wide. Who could ever forget his stunning blindside play to send Will Chambers over for the winning try in the final minute of play against Cronulla in Round 25? Waqa averaged 130 metres and scored seven tries in 11 games.

Coach Craig Bellamy says: “Our defence in the second half [of the grand final] was outstanding and that’s what I’m most proud of because we pride our club on defence.

“I thought [Cooper Cronk] controlled the game great. He has had a wonderful season. Like all of our players he gets what he deserves. There is no-one that works harder than him. He was the main guy that turned us around after our five losses. I probably shouldn’t say this but he was a part of those five losses. I said that to him.

“He turned around and he had a bit of a shot at me too just one on one – and he was right. But he was the main guy that turned us around. From then he has just come on in leaps and bounds with his form and he controlled that game. His kicking game in that first half was as good a kicking game as I’ve seen in a grand final.

“I’m just lucky to coach the guys I coach and I’m just so proud. I don’t think I’ve ever been as proud of a Storm team as I am of this one. When you think about it, it’s been one hell of an effort (after the salary cap saga of 2010) but the guys are the ones that have got us to where we are. They’re the ones that have believed in the club and have got us back to where we are now.”

Conclusion… A superb season from Melbourne ended with rugby league’s top prize – and deservedly so. Despite a small blip on their radar after Origin, the Storm were very much a team to beat for much of the year and when it came to the crunch they showed the value of having such experienced big-game players in key positions. Their grand final performance was an exhibition in composure and professionalism. Against any other side the Bulldogs would probably be celebrating their own premiership win, but Melbourne were relentless in the first half in building a 14-4 lead, then held out raid after raid in the second half. It’s been a tough few years for the Storm but this is one they’ll never forget. 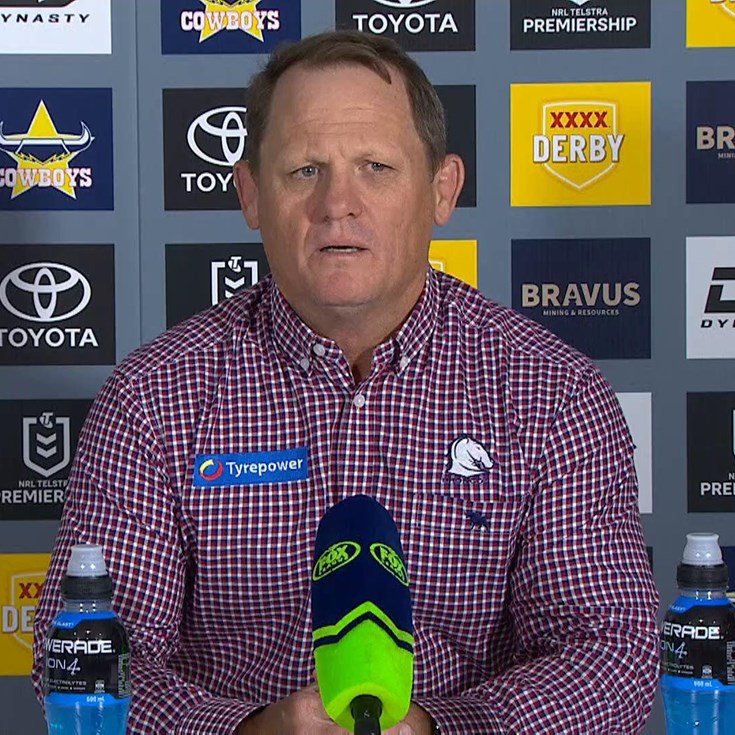