The wounded Titans will be hoping their fans can give them a much-needed boost when they take to the field against the resurgent Eels and pull down the curtain on a drama-charged Heritage Round of rugby league on the Gold Coast strip on Monday night.

As if their growing injury list weren’t enough of a concern, amiable coach John Cartwright’s patience with star recruit Dave Taylor has worn out, with the Coal Train shunted to a siding for the next two weeks due to attitude concerns.

Add to that shining light Aidan Sezer’s unavailability through injury, uncertainty over halfback Albert Kelly, and last week’s other injuries to crafty hooker Matt Srama, centre Brad Takairangi and second-rower Ben Ridge, and the Titans will need to dig deep if they are to get the better of a Parramatta side still brimming with the confidence garnered from a stirring 13-6 defeat of Cronulla last Saturday.

At halftime in last week’s clash the Gold Coast appeared to be in a happy place. Sitting 5th on the ladder following three wins in the opening month of the season, they led their big brothers Brisbane 12-10 – but they unravelled in the second stanza, the Broncos galloping over the top of them with 22 unanswered points.
They’ve slipped just one rung down the ladder but need to rally to be competitive here against Parramatta, who rode a wave of emotion to stun the Sharks in their Johnny Mannah Cup clash last week.

It was a stunning turnaround in commitment by the Eels following their embarrassing 50-nil defeat to the Roosters just five days before, after which their coach Ricky Stuart basically talked down the quality of their playing roster. That put-down certainly had the desired effect – but the question remains as to whether they can deliver the skill, passion and execution required to compete with the best units on a regular basis.

Certainly they get their chance to show they have not just turned the corner but straightened the steering wheel when they take on the understrength Titans.

In a raft of Gold Coast team changes, John Cartwright has promoted Steve Michaels to cover for Takairangi at centre, shifted Greg Bird back to the second row for Ridge and called on Beau Henry to wear the No.6, recalled Luke O’Dwyer to start in the second row and named Beau Falloon to start at hooker for Srama. Mark Minichiello and Anthony Don are the new faces on the interchange.

Meanwhile Ricky Stuart has merely tweaked his victorious 17, with Mitch Allgood to start at prop and Fuifui Moimoi benched, and Joseph Paulo to start at lock and Kelepi Tanginoa benched.

Watch Out Titans: Approaching next week’s Representative Round and with Origin just around the corner, Jarryd Hayne is due a breakout game. The Eels’ co-captain will fancy his chances of delivering a master class in creativity given the disruption to the Titans’ roster.

In particular Titans stand-in five-eighth Beau Henry will be shuddering any time his team need to defend on their try line, with Hayne certain to target his edge of the field and chime in on second-man plays or deliver cut-out passes to his winger.
Hayne leads his teammates for line-break assists (with four) and has crossed for three tries. He’s only set up two tries to date – but that tally is certain to be added to here. He’s on a high, too – with 160 metres and six tackle busts from last week.

Watch Out Eels: Co-captains Greg Bird and Nate Myles, plus veteran interchange forward Luke Bailey, are the danger men Parramatta need to halt. The trio have built a great combination in the Titans’ engine room, with their strong running and offloading keeping oppositions in two minds as they race to set their defensive lines.

Bird has made 12 offloads so far, the fifth most by any player in the comp, and his 136 metres a match are the second most behind Manly’s Anthony Watmough. Myles is charging to 116 metres a game from 64 minutes on the field and has made three offloads, while Bailey has made seven offloads and a 94-metre gain.

Overall the Titans rank fourth for offloads with 12.4 per game.

Plays To Watch: William Zillman and Jamal Idris leaving Parra defenders sprawled in their wake – they have made 15 and 14 tackle busts respectively; Chris Sandow (four try assists and three tries) taking on the Titans defence and trailing his big forwards through the middle – he scored a long-range try off a Fuifui Moimoi pass last time they met; Albert Kelly dodging through the centre of the ruck; and Tim Mannah (122 metres a match) continuing to lay the foundation for his team.

Key Match-Up: Both teams’ front rows – including their hookers. How they perform will go a long way to determining the winner. To date the Titans are grinding out good field position, totalling 1418 metres per match, while the Eels have been up and down in compiling their 1269-metre average (fourth fewest).

The Titans need more from Luke Douglas (81 metres) and also Ryan James (91 metres), while Falloon needs to call the shots from dummy-half with confidence.

Meanwhile Parramatta need more from Mitch Allgood (89 metres) and Darcy Lussick (82 metres), while hooker Matt Keating gets the chance to dominate his less-experienced opposite No.9.

Where It Will Be Won: Defence. Both sides are middle of the pack for tackling efficiency. While the Sea Eagles miss the fewest tackles per game in the league (16) and the Panthers miss the most (33), each of these sides have missed precisely 23.2 tackles per game to date. The misses have hurt the Eels more – they are conceding 23.4 points per game (fifth most) while the Titans concede 13.6 points every 80 minutes (fourth fewest).

The History: Played 8; Titans 5, Eels 3. The Titans lead 3-1 in clashes at Skilled Park but more telling is the fact that Parramatta have won just four of 12 games played on the Gold Coast.
Match Officials: Referees – Jason Robinson & Adam Gee; Sideline Officials – Adam Reid & Clayton Sharpe; Video Referees – Steve Chiddy & Matt Rodwell.
Televised: Fox Sports 1 – Live 6.30pm.
The Way We See It: The Eels will never get a better opportunity to trampoline back to top form than against this week’s understrength opponent. Master motivator Ricky Stuart will ensure they are switched on. Parramatta by eight points.
*Statistics: NRL Stats 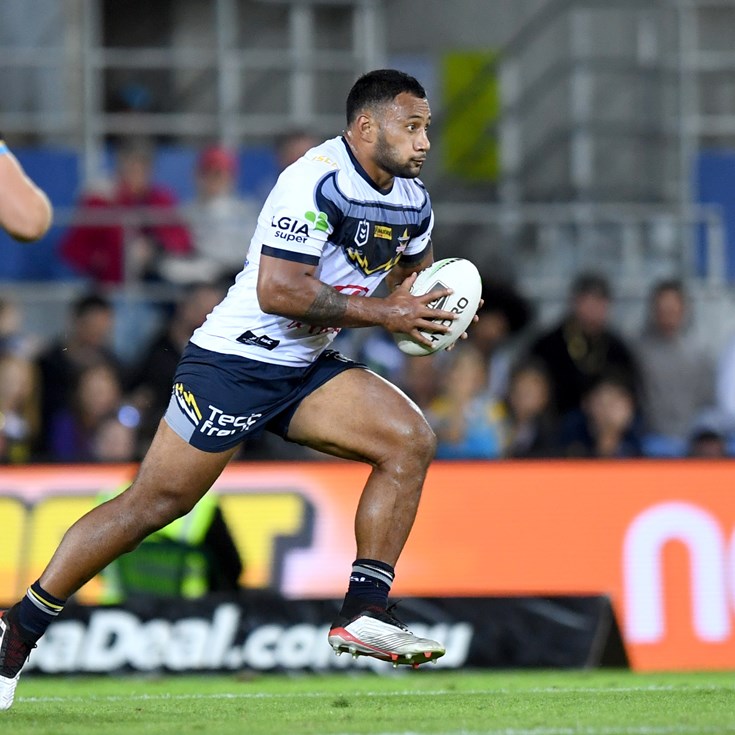 Rugby League unites to support communities get back in the game