Auckland mayor Len Brown announced a host of exciting partnerships between NRL clubs and local clubs for a city-wide community initiative ahead of the inaugural Dick Smith NRL Auckland Nines at Eden Park on February 15-16.
Mayor Brown revealed a schedule which sees the Gold Coast Titans travelling to the Hibiscus Coast Raiders in the north, the Canterbury-Bankstown Bulldogs to the Pakuranga Jaguars in the east, the Melbourne Storm to the Manurewa Marlins in the south and the North Queensland Cowboys to the Glenora Bears in the west.
Each of the 16 teams competing in the Nines will visit an Auckland Rugby League club in what is an unprecedented grass roots blitz. All but one of the appearances will occur two days out from the tournament on Thursday, February 13 with the only exception being the Titans' journey to Hibiscus Coast on Wednesday, February 12.
"Auckland Council is excited to bring the hugely innovative Dick Smith NRL Auckland Nines to the region and is also excited about the positive legacy the tournament will create for grass roots league across the city," said Brown.
"We hope a new generation of players will be inspired by the chance to interact with their club's adopted NRL team. Meeting the stars coming for the tournament will provide youngsters with a buzz that will have long-lasting benefits in this historic rugby league strong-hold."
Of special interest to the mayor – not to mention Sir Peter Leitch – was the discovery the Penrith Panthers had been chosen as the NRL club to visit the Mangere East Hawks. While the squads are yet to be selected it means Mangere East could be playing host to former Warriors coach Ivan Cleary and several New Zealand players including new signing Elijah Taylor plus Lewis Brown, Isaac John and Dean Whare.
The Storm's trip to the southern-most club chosen for the initiative means Manurewa juniors Jesse and Kenny Bromwich could return to their old club.
With several thousand fans expected to flock to see an array of NRL stars in their neighbourhood, one of the biggest crowds is likely to show up at Murray Halberg Park when the Vodafone Warriors pair up with the Marist Saints. Marist has produced several Vodafone Warriors including Gene Ngamu, Francis Meli, Motu Tony, Jerome Ropati and Bill Tupou plus Sonny Bill Williams and Roy Asotasi. The club also provided five players in the Vodafone Junior Warriors' side for this year's NYC grand final – David Fusitua, Adam Tuimavave-Gerrard, Tuimoala Lolohea, Mason Lino and Michael Sio.
Out west it will be a case of two Roosters clubs uniting when Te Atatu, which produced the brilliant Dennis Williams in the 1970s and 1980s, welcomes 2013 NRL premiers the Sydney Roosters, maybe with SBW in tow along with their cast of other stars.
Having all 16 NRL clubs in Auckland at the same time is unprecedented, let alone making visits to local clubs en masse as well.
"To have the stars of our game at local league grounds is huge for grass roots rugby league and I know the clubs want to provide a unique experience for each team," said ARL chairman Dene Biddlecombe.
"Everyone from school children to passionate rugby league fans will be able to meet their favourite stars just days before the February tournament. This is a brilliant opportunity."
Rachael Carroll, general manager destination and marketing ATEED, said the Dick Smith NRL Auckland Nines would drive huge economic benefits for the city as well as providing Eden Park with one of its biggest events in a year when the Vodafone Warriors will also play three home games there during the 2014 NRL season.
"The Dick Smith NRL Auckland Nines will become an economic anchor over time and bring legacy benefits to Auckland and New Zealand by way of rugby league development," she said.
Dick Smith NRL Auckland Nines club partnerships:
Brisbane Broncos - Point Chevalier Pirates
Canberra Raiders - Bay Roskill Vikings
Canterbury-Bankstown Bulldogs - Pakuranga Jaguars
Cronulla Sharks - Otahuhu Leopards
Gold Coast Titans - Hibiscus Coast Raiders
Manly-Warringah Sea Eagles - Richmond Rovers
Melbourne Storm - Manurewa Marlins
Newcastle Knights - Ellerslie Eagles
North Queensland Cowboys - Glenora Bears
Parramatta Eels - Papatoetoe Panthers
Penrith Panthers - Mangere East Hawks
South Sydney Rabbitohs - Glenfield Greyhounds
St George-Illawarra Dragons - Otara Scorpions
Sydney Roosters - Te Atatu Roosters
Vodafone Warriors - Marist Saints
Wests Tigers - Manukau Magpies 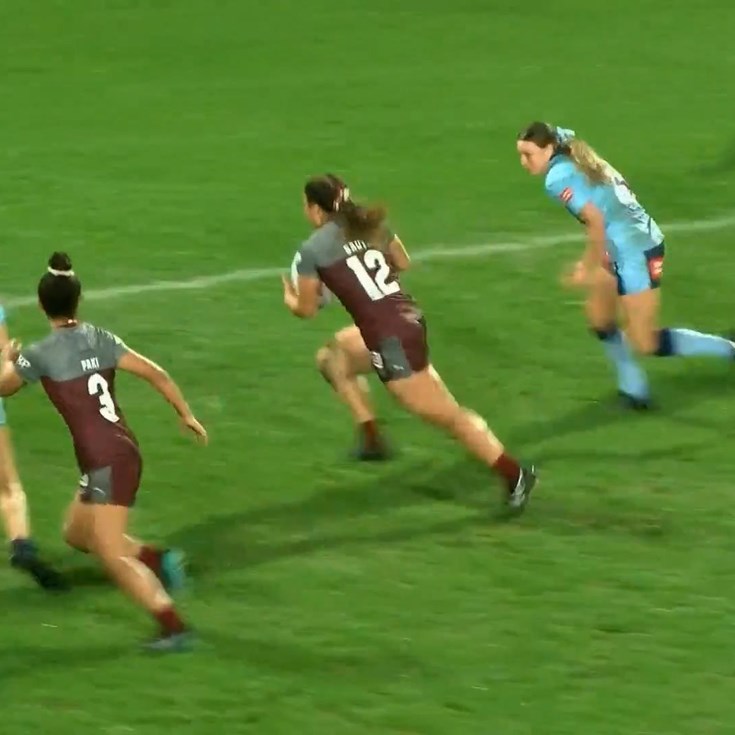 Ferguson holds a pass up for Sautia

Yaranamua fires a pass to Berry