The Fantasy season is now well and truly underway, with most Holden NRL Fantasy head-to-head leagues kicking off over the weekend, the cash cows having enjoyed a month of price rises, and a brand new Plate competition opening up for new teams who register this week or next.

There have already been a fair share of surprises this year, from Cameron Smith's bad back to Manu Ma'u's rapid rise to Ben Hunt being a genuinely good Fantasy scorer. But with more tempting buys arriving on the scene and several underwhelming stars failing to impress, who should you buy, trade or hold onto this week?

Here are my answers to the week's big questions.

From Daniel Klein
Hi Mr Scout. Thinking of a radical trade of Cam Smith to Api Koroisau for a shameless money grab. McCullough is my 2nd hooker so I can't DPP move anyone else for Koroisau. Burning trades I know but I don't want to miss out on a great cash cow.

What are your thoughts on this?

It's risky but it could pay off. McCullough is going pretty close to matching Smith this year and if Smith's back keeps playing up it could be a lucrative move. It'll obviously cost you points in the short term – plus you'll need to make sure you have enough cash to get him back in your squad later (after Origin). But if Issac Luke is out of the Souths side for another couple of months as expected and Koroisau keeps hitting 40s in that time, he could make a lot of money. What does your team need more of now: points or cash? Is the short-term scoring pain worth the long-term cash gain?

From Paul Smith
Luke Brooks, dump him now and save myself the pain, or keep him longer and see if he can become consistent? A lot has been said about this youngster but so far his form has been all over the place.

I think he's a sell. I (somewhat harshly) dumped Brooks early on and I don't see his base stats (kick metres, tackles) being strong enough to make him a consistent scorer like Daly Cherry-Evans, Adam Reynolds, Aidan Sezer or even Ben Hunt. He's good in attack but makes a lot of missed tackles, so he's always a chance of posting a low score if the Tigers don't fire. At $187,538, he's not a dirt-cheap cash cow like Michael Witt either. Obviously he's a great talent and could prove me wrong this year, but there are plenty of safer options out there.

From Brandon Lee
Hey Lone Scout, I was wondering if you think Will Hopoate is a sell for this week or if I should hold onto him and hope he gets back to his old form?

Yeah he might be a sell. I'm considering it. It really comes down to how quickly you think he'll get back to his best (he has still just played four games in two years), how much action do you think he'll get on the right side of Parramatta's backline, and whether there is a better option out there you can afford. He probably won't lose you money, but if you can upgrade to a top-shelf centre or fullback then now might be the time to make the move.

From Nick Kemmler
G'day LS, was curious on your opinion about Dallin Watene-Zelezniak and do you think it is worth trading out Ben Barba for him (to free up some money)? Barba is losing money and I’ve held onto him for 5 rounds and still no score worth holding on any longer. Thanks.

Barba might be a sell, but I don't think Watene-Zelezniak (I'll just call him DWZ from here on) is the right replacement. I know he's cheap, but you'd be taking a big gamble with an untried 18-year-old winger, particularly from a side with the depth in the outside backs that Penrith have. Kevin Naiqama is no slouch and is waiting in the wings in the NSW Cup so he could bump DWZ out of the first-grade team at any time.

If you're trading out Barba I'd look to find some cash and upgrade him to a genuine scorer. Guys like James Tedesco and Anthony Milford are getting close to must-haves, and then there are the proven guns like Greg Inglis, Jarryd Hayne and Josh Dugan. DWZ might turn into a cash cow, but there's just as much chance he'll just take up an extra spot in your reserves for the rest of the year.

From Ali El-said
With the new Fantasy Plate will we get unlimited trades until Round 6 and will the players' prices change after Round 5, or will they remain as they are until the Fantasy Plate comp starts?

No, it's just like starting a new team in any other round. Once you've got your team selected you get 2 trades a week, and player prices change as normal. Starting a new team this week gives you the benefit of the Round 5 price changes, while starting next week gives you a bit more certainty about team lineups for Round 6. I reckon getting started this week is the way to go.

From Steve Hegarty
Is it too late to jump on Nathan Peats?

Nope, he's still making money and scoring points. He's a must have this year. Snap him up.

From Grant Rayner
Is time to get rid of Holdsworth with Carney and the Sharks going poorly and bring in cash cow Michael Witt?

Yep, with Witt coming straight back into the Dragons' halfback spot and Holdsworth a chance to lose his spot to Jeff Robson soon, that looks a good trade.
UPDATE: The late mail suggests Adam Quinlan could start as Dragons halfback this week with Witt missing out altogether, so rethink this trade.

Richard Hearn
Hey mate I am thinking of trading Albert Kelly for either Hodkinson or Widdop. I already have DCE. Silly move? If not, which is better? I'm playing H2H only, and would use the cash to upgrade a FRF where I'm weak.

It's not a bad move actually. I think you've got all you can out of Kelly now – he'll still have some big scores but is unlikely to be consistent for the rest of the year. No player can be relied on to score long-range tries on a regular basis. Widdop is going well and still making cash while Hodkinson is playing like a potential top gun, although keep in mind he has had a few tries to inflate his scores. I've got Widdop in my team alongside DCE so I'd have to suggest that pairing.

From Ian Quilter
When does a cow become a keeper?

I picked Peats, Arona, Mau and Hunt at the start with the intention of using them as cash cows. They all now average 50+ over 4 weeks, with the exception of Arona who is averaging 47! So when does a cash cow become a legitimate keeper and is it worth trading them when they are scoring so well. I'm guessing Arona will lose game time when Gallen returns but the other three seem pretty solid.

Yep, it's pretty simple with those guys – hold them for as long as they're scoring well, and their price is going up. It's still fairly early days so things could change – as you say, Gallen's return will probably hurt Arona's scores – but Peats, Ma'u and even Hunt could well end up being keepers in the long run. Guys like Daly Cherry-Evans, Adam Reynolds and George Burgess all made the transition from cash cow to keeper in one season, so there's no reason these guys can't. And if their scoring spree comes to an end, just cash them out and improve your squad elsewhere.

Got a Fantasy question for next week? Join in the Fantasy conversation on Twitter, Facebook or by sending me an email at iamthelonescout@gmail.com. Get more hints and tips tips on my NRL.com page or start playing Holden NRL Fantasy now. 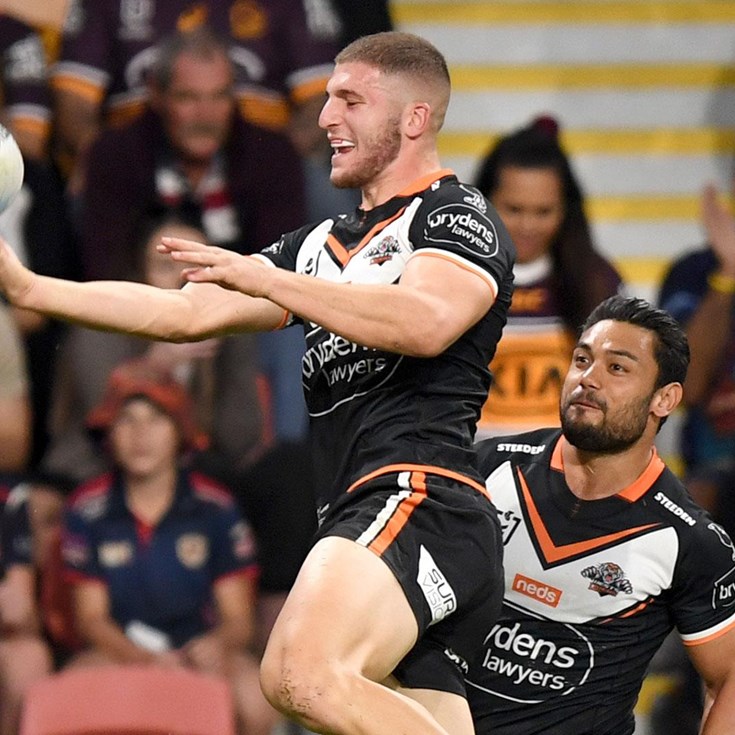