As a kid he would marvel at the long-range tryscoring exploits of some of the game's great entertainers but Titans fullback David Mead insists he won't be a passive spectator if his opposite number, Ben Barba, breaks free on Friday night.
While Barba came under fire for his performance for the Broncos in last week's loss to the Eels and is yet to break his try-scoring drought for his new club, Mead was superb against Melbourne in his second effort filling in at the back for William Zillman.
There is the chance that Zillman could return from a hamstring injury in Friday night's blockbuster at Cbus Super Stadium but the performances of both Mead and winger Anthony Don may cause coach John Cartwright to err on the side of caution.
It will be a night of milestones on the Gold Coast as the table-topping Titans celebrate the 200th NRL game for Luke Douglas and also Kevin Gordon's 100th game for the club.
Opposing Storm superstar Billy Slater last Sunday, Mead scored a try, ran for 144 metres and came up with some critical plays at the Titans' defensive side of the field and drew high praise from his coach following the two-point win.
Since being given the opportunity to play fullback at the end of last season and also for Papua New Guinea at the World Cup, Mead has gone to school on the way the likes of Slater and Manly's Brett Stewart approach their work. Like all league fans he was captivated by Barba's displays in 2012 but does not want to see a return to that type of form on Friday night.
"I definitely enjoyed watching how he played in 2012 when he had that freak year but in saying that I'm going into the game 100 per cent focused on my job and doing it the best I can so our team can get the result," Mead said. "I can't get too caught up watching him do what he does.

"Obviously you've got to be aware of the type of player he is and what he can do so we've got to try and shut him down.
"During the week we have a look at the different teams' strengths and weaknesses and for the Broncos their strengths are having Benny Barba on the left and Justin Hodges is back from injury and showed what he is capable of doing and Matt Gillett, we've got to really watch him as well."
In addition to the extra involvement and ability to pop up when try-scoring opportunities present themselves on any part of the field, Mead says he is enjoying the extra responsibility that comes with wearing the No.1 jersey.
Whether it's identifying a shortness in the defensive line, a weakness in the opposition or trying to predict the areas that opposition kickers are targeting, the 25-year-old is relishing being more engaged than he normally is on the wing.
"I think it's having more control in the game. Having a look at the opposition to see where their weakest point is or which part of the field to attack, having that control is what I find a lot more attractive than playing on the wing," he said.
"I haven't really played much fullback so I looked at Billy Slater and Brett Stewart, those types of players, I look at some of their clips and see what they do really well and try to use their type of game-plan in my game. Obviously I haven't had much of a chance to use that but watching them definitely helps my game.
"You've definitely got to do all your study on the kickers in the game because they're very different and kick to different parts of the field.
"You've just got to study each kicker differently every week and we certainly do our homework, myself and the two wingers, to make sure we're bringing the ball back as far as we can to help all the forwards out."
Although he is six games short of joining him in the Titans' 100 club, Mead and Gordon are dead level on 52 apiece as Gold Coast's all-time leading try-scorers but the part-time custodian said there won't be any flamboyant celebrations to match his boyhood idols should he edge in front against the Broncos.
"Guys like Nathan Blacklock, Anthony Mundine and Steve Renouf, mainly because of the long-range tries they used to score and the entertainment they provided," Mead said of the players he admired growing up.
"They'd do the post-try celebrations so those guys I really enjoyed watching.
"[Titans coach John Cartwright] hasn't banned [post-try celebrations] but I don't really have any up my sleeve just yet. We'll see how the year pans out." 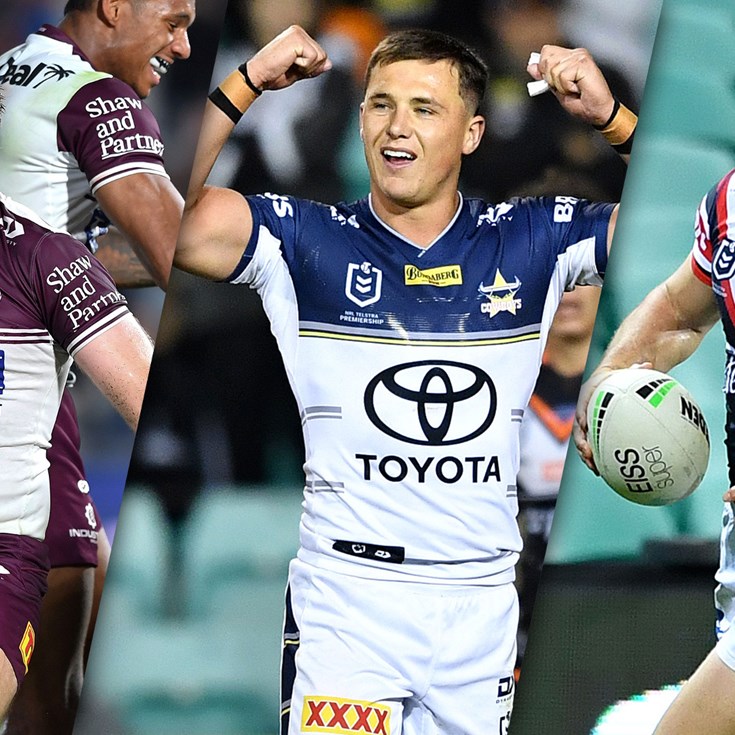