An undermanned Canterbury has recorded its first win in Melbourne since 2005, running out a 6-4 winners over Melbourne in front of 13,169 fans at AAMI Park.

Storm captain Cameron Smith had a penalty kick on the touch line with two minutes left to draw level but sprayed it wide.

The win was just reward for the travelling Bulldogs fans  who watched their side break a seven-game losing streak in Melbourne.

It was that characteristic Bulldogs defence that did the business, helping to weather the pressure in the first half before driving the hosts back in the second.

James Graham further cemented his credentials as the in-form forward in the competition, leading all comers with 158 metres, while Trent Hodkinson, just three days after Origin duty, had that brilliant boot working to perfection.

For Melbourne it was a case of missed opportunities in the first half that saw it simply unable to break a stubborn Bulldogs defence.

The opening 15 minutes of this one was nothing worthy of the rugby league vault.

Both teams appeared to dance around the issue like prizefighters exchanging early round jabs.

The stalemate would have been broken on 12 minutes if not for an unshakable Mitch Brown tackle on Mahe Fonua as the Victorian dove head first for the line.

It was only fitting that the game’s first highlight would come on 16 minutes from a man playing his first game in purple for nearly two months.

Cooper Cronk produced his 14th try assist of the season in sending Kevin Proctor over, the Kiwi forward breaking through the Bulldogs line for a 4-nil advantage.

After standing toe-to-toe in the early stages, the Bulldogs appeared to lose their way to concede four penalties in the space of six minutes.

In the middle of the park the Storm were finding their way through the Bulldogs line with relative ease but it was in the final 20 of the half where the hosts could not capitalise.

As poor as the Doggies were with ball in hand, their stubborn goal line defence was the only reason just four points separated the sides at halftime.

Canterbury put in the work defensively in the first half and early in the second had their hard work rewarded.

Sam Kasiano gathered five metres from the line and proved too much for three Storm tacklers as he piggy-backed them into their own in-goal.

Trent Hodkinson slotted the conversion and it was the visitors who led 6-4 after 45 minutes.

Seven minutes later the Bulldogs looked likely to go further ahead as Brown broke clean through and appeared try-bound, only to be thwarted by a lunging tackle by Billy Slater.

Melbourne simply could not generate any metres in the early stages of the second half.

The Bulldogs defence that had performed so well on the back foot was beginning to peg its opponent deep in their own territory.

It took 15 minutes for the Storm to wrestle back any semblance of decent possession.

Their persistence almost paid off on 63 minutes as a Slater-Fonua one-two on the right wing had the home crowd on their feet.

A clever Cronk kick off the ensuing play had club debutant Marika Koroibete within inches of putting his new club in front only for the ball to be knocked out of reach by a quick-thinking Mitch Brown.

Brown would again prove the savour 11 minutes from time when Slater broke clear in the open field only to be mowed down by his opposing number.

A knock on by Dale Finucane 25 metres out from his own line would have Canterbury back on their heels in the dying moments.

Another penalty was awarded to Storm again of the repeat set of six with skipper Cameron Smith opting to take the penalty kick from the touchline.

However the proven match winner saw his kick not only sail to the right of the posts but fail to go dead, allowing the Bulldogs a full set to push into Melbourne's end and wind down the clock, leaving them only a handful of plays to try and extract a miracle win – one that was not forthcoming. 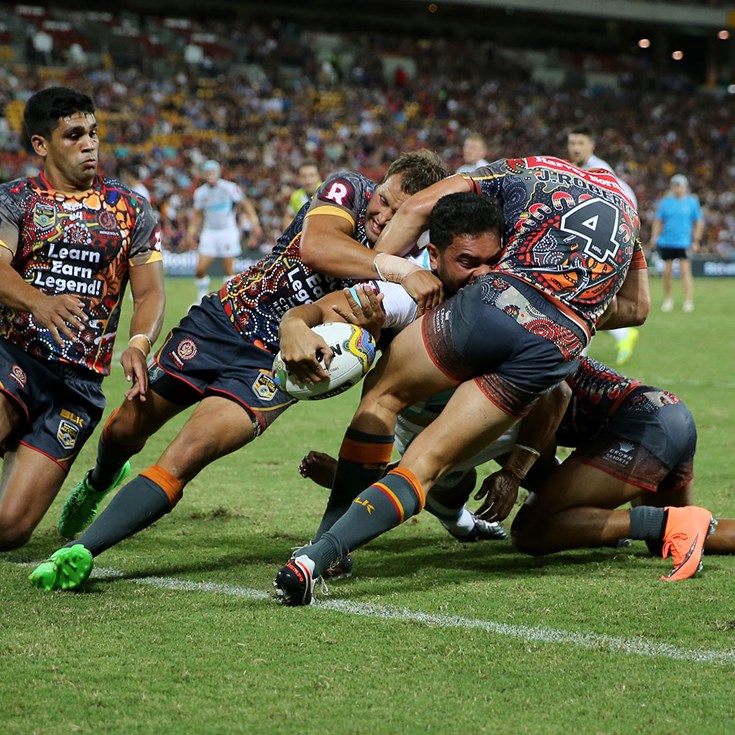