The byes are done, and for some of us Holden NRL Fantasy coaches the head-to-head league finals have already arrived. That makes this one of the biggest trading weeks of the season - and the Fantasy gods have made things interesting with a few key injuries.

Fantasy review: Winners & losers from Round 18

Here's all the big team news heading into Round 19.

Sharks: Paul Gallen is out for at least a couple of weeks with a bicep injury, making him a probable trade at this stage of the season (unless you're playing a head-to-head league with finals starting in Round 22 and can do without him until then). Andrew Fifita ($381,947) is into the starting side at prop and looks like a very handy straight swap for Gallen – and one that will net you an extra $90K in salary cap space. Fifita's price has just dropped $35,717 and will keep dropping unless he hits close to 80 this week, but he's already a very good price and made 48 points from about as many minutes in his NRL return on Sunday. Wade Graham ($325,641) and Michael Gordon ($252,964) are both in above-average form at the moment.

Cowboys: For those who missed it last week, Ethan Lowe is a sell after copping a two-match ban for betting on NRL matches. Popular Fantasy winger Curtis Rona drops out due to a backline reshuffle and is also a sell. Johnathan Thurston ($397,835) is the top-scoring half under $400,000 this season, and he returns to the side this week along with James Tamou, Rory Kostjasyn and Ray Thompson, while Michael Morgan goes back to fullback.

Eels: Jarryd Hayne ($423,912) is the best winger/fullback in the business – scoring eight points a week more than the next best, Panther Josh Mansour – and is a great buy if you can afford him. He'll make a welcome return to the Eels outfit that was thrashed by the Warriors on Saturday. The whole Parramatta side was disappointing in Saturday's thrashing at the hands of the Warriors, with Isaac De Gois's 22 putting the breaks on his money-making spree. He does still have some cash to make, so could still be a late upgrade to a star hooker if you can free up cash elsewhere.

Rabbitohs: It's the battle of the prized fullbacks this week – in the NRL and in Fantasy. What's the better option: the irresistible form of Hayne or the pure value of Greg Inglis? Inglis ($308,983) is almost $100,000 cheaper than he was earlier in the season and is sensational value right now (although he's likely to be even cheaper next week). He's back in the side this week, with Issac Luke starting at hooker again and John Sutton returning to the halves with Luke Keary back on the bench. George Burgess is in a bit of doubt with an ankle injury, while Sam Burgess ($462,063) remains a serious captaincy prospect after averaging 71 over the past three rounds. Dylan Walker's ($351,992) last five scores read 76, 57, 49, 60, 71 and 53, and he's a quality option at centre.

Roosters: Daniel Tupou is out for six weeks with a torn lat suffered in Origin III, joining fellow backline stars Michael Jennings and Roger Tuivasa-Sheck in the casualty ward, meaning cheapies Nene McDonald ($129,112) and Brendan Elliot keep their spots on the wing. Aidan Guerra and Boyd Cordner return to the back row. Heath L'Estrange has been named 18th man, meaning Jake Friend ($377,609) could play the full 80 at hooker this week. James Maloney ($324,663) and Sonny Bill Williams ($333,567) have been frustratingly inconsistent Fantasy scorers this year.

Panthers: Josh Mansour's ankle injury creates a headache for Fantasy owners – although he has surprisingly been named this week as the club awaits scans. He's in serious doubt, so stay tuned to the Friday late mail before making a call either way. Tyrone Peachey is a definite sell after being ruled out for the season with a pectoral injury. Matt Moylan is his replacement in the halves this week, with cheapie Dallin Watene-Zelezniak ($123,829) resurfacing at fullback. Jamal Idris ($284,953) will have disappointed all those coaches who snapped him up last week after his score of 77, following that up with a meagre 29 (including seven missed tackles) in his team's win over the Broncos. James Segeyaro ($374,001) remains a handy option at hooker with 55 on Monday night.

Raiders: Cheapie Brenko Lee is out for a couple of weeks with a hamstring injury, meaning Jarrad Kennedy is a makeshift centre this week while Joel Edwards starts in the pack – although Matt Allwood has been named 18th man and is a possible late inclusion in the backline. Anthony Milford ($302,283) will be a popular buy after his dazzling 98-point effort against the Titans, but keep in mind it's just the fourth time he's scored more than 50 this year. Shaun Fensom ($415,237) grabbed a rare try last week in his equal-best Fantasy performance of the season.

Broncos: The Broncos are unchanged. Andrew McCullough ($408,113) scored 64 last week despite spending a quarter of the match on the bench, and fellow rake Jake Granville looks set to remain on the Brisbane interchange. Corey Parker ($351,672) followed up his Man of the Match effort in Origin III with easily his best Fantasy display of the season for the Broncos on Monday night.

Warriors: Surprisingly a couple of changes this week to the team that routed Parramatta, with Thomas Leuluai back from a long injury layoff, young forward Agnatius Paasi named to make his debut and Jayson Bukuya returning from a foot injury as 18th man. Sam Tomkins, Shaun Johnson, Simon Mannering, Ben Henry and Konrad Hurrell all topped the 50-point mark last week.

Knights: Adam Cuthbertson joins the side as 18th man. Erm, and that's about it for Newcastle when it comes to Fantasy at the moment.

Titans: William Zillman is out indefinitely with a hamstring injury, with Kevin Gordon moving to fullback. Daniel Mortimer ($168,437) made another $25,000 in value last week and still has a break even of -1.

Tigers: David Nofoaluma is out for the season with a knee injury, with Keith Lulia moving to the wing as Tim Simona returns at centre. Bodene Thompson is also back in the second row. Robbie Farah ($489,558) is the top scorer in the game this year but he'll be cheaper than his starting price next week.

Bulldogs: Josh Morris returns to bump Drury Low out of the side, while Dale Finucane has played his way into the starting pack. James Graham ($364,617) has been superb this season. Josh Jackson returned to his usual job as an 80-minute back-rower last week and scored a solid 45, his best since Round 13.

Dragons: Trent Merrin is out for two more weeks and is a sell if you're playing for overall points or have a finals series starting this week. Josh Dugan ($354,030) is back at centre for the Dragons, where he has averaged 58 over his past three games, while Mike Cooper starts at prop and bumps Jack Stockwell back to the bench.

Sea Eagles: Anthony Watmough, Jorge Taufua and Jason King return in a triple boost for the league leaders. Brett Stewart ($301,804) is in outrageous Fantasy form by his usual standards after last week's 84. Jamie Lyon ($264,199) has been a little disappointing in Fantasy this year and could be worth upgrading if you're 100% happy with your squad elsewhere. 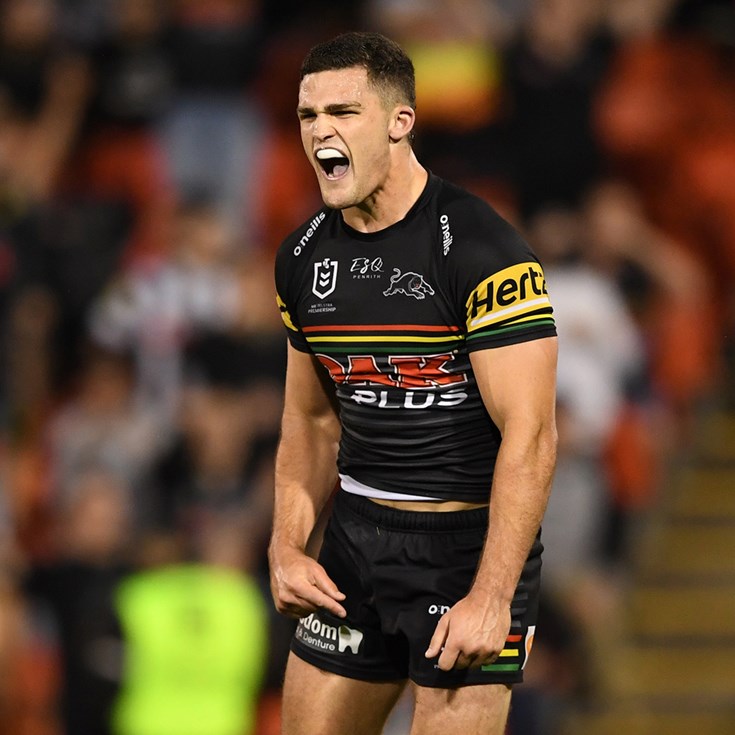