South Sydney have jumped into a share of the competition lead after gate-crashing Michael Ennis's club farewell with a gritty 21-14 victory at ANZ Stadium on Thursday night.

Despite trailing for most of the match, the Rabbitohs took the lead off Adam Reynolds' supreme 73rd minute cut-out for a Lote Tuqiri try in the corner.

The South Sydney No. 7 sealed the win with a penalty and a field goal in the closing minutes.

The win could come at a big cost however, with the South Sydney halfback on report for a lifting tackle on Bulldogs five-eighth Moses Mbye in the 59th minute.

Star forward Sam Burgess, who bagged a double, will also be monitored closely after coming off in the second half with what looked to be a hip injury. But his inspirational return late in the second half helped turn the game back in South Sydney's favour.

Chris McQueen also left the field through injury in the second half, but unlike Burgess, he was not to be seen for the remainder of the contest.

Ennis certainly knew how to make an entrance to his own party, picking up and driving Rabbitohs halfback Adam Reynolds into the turf inside the first minute.

The life of the party was in the thick of it again in the 6th minute, getting the ball back after letting the referees know all about Issac Luke's lash close to the line that wasn't unlike the one that put Josh Reynolds on the sideline a few weeks ago.

The turnover proved twice as painful for the visitors when the Sharks-bound hooker went blindside in the ensuing set, framing up a three-on-two that ended in Mitch Brown going over in the corner.

By this stage it was clear the match was descending into what Brad Fittler labelled a "dogfight", one that the Bulldogs looked more willing to get into.

The Rabbitohs did manage to get one against the run of play, however, when their own departing star in Sam Burgess stormed onto an inside ball from Luke Keary and ran over that man again, Ennis, beside the upright.

Presumably upset that Burgess had stolen his thunder, Ennis – who also enjoyed a signature run-in with lead referee Gerard Sutton – quickly returned to centre stage when he dummied his way over from dummy half in the 33rd and set up a 12-6 lead at the break.

The half-time oranges looked to have done the trick for the cardinal and myrtle, who threw the first shot of the second half when Luke Keary's dummy left James Graham staring into the distance before throwing back a magical offload for Burgess' second.

But when Burgess limped up the tunnel with an injury immediately afterwards, South Sydney's hopes of a win looked to go with him.

A Trent Hodkinson penalty minutes later put the Bulldogs back in front, before Burgess' return – as well as Reynolds' late-game heroics – turned the match back in their favour. 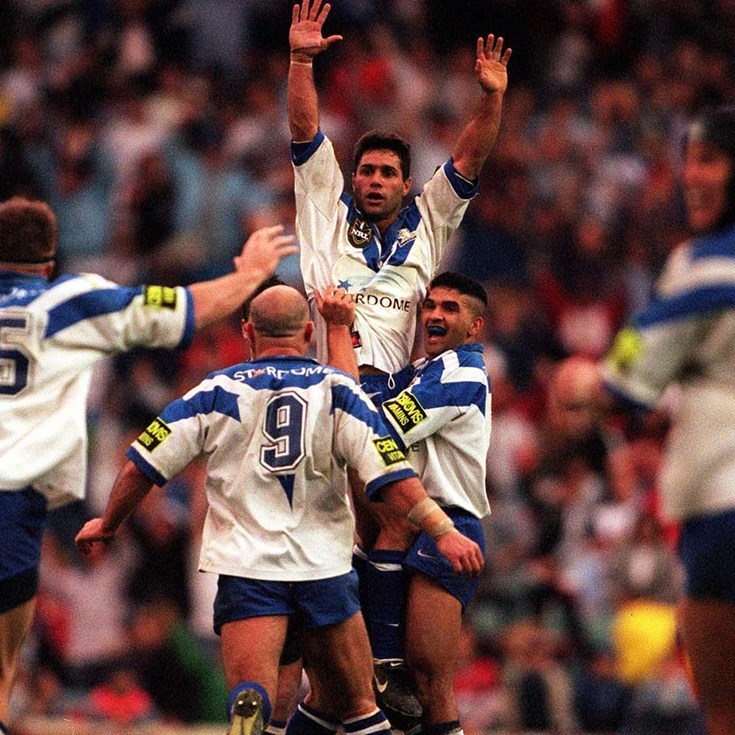