The Cowboys needed more than 80 minutes to get the job done, but it was ice-cool veteran Johnathan Thurston who stepped up, slotting his second field goal of the game to bury a despondent Cronulla Sharks side 20-19 in golden point extra time in front of 11,712 in Townsville on Monday night.

With North Queensland quoted at the lowest odds of any team since the turn of the century, it was billed as a massacre that proved everything but.

After leading or holding a share of the lead for 50 minutes of the contest, class prevailed in the end, but not without an almighty scare on the back of some downright crazy oval-ball antics in the last five minutes.

When Johnathan Thurston had slotted a field goal in the 75th minute, Sharks fullback Michael Gordon had no choice but to hoist a short kick-off in the faintest hope of regaining possession and a say in the final result.

The kick went all of five metres upon landing, but tumbled and tumbled to hit the 40-metre line on its last revolution and was snatched by lock forward Chris Heighington in a split second.

A hell-bent Sosaia Feki would crash through multiple defenders and bag his double on the ensuing fifth tackle after another second-man on the line play between Robson and Gordon produced points. Feki would improve the angle and score under the sticks, which was converted by Gordon to have the scoreboard reading 19-18 and giving the visitors just three minutes to score again.

Five-eighth Daniel Holdsworth looked to have blown their chance with two minutes to go, shanking a long-range field goal attempt, but made up for it with just 30 seconds left by launching a 45-metre bomb that went straight over the black dot to send the game into extra time.

And after some excellent work from the Cowboys' big men, it was none other than the North Queensland co-captain who stepped up to deliver the win in golden point.

There was no shortage of aggression early for the Cowboys with Ashton Sims charging the line to draw a high shot, and on the very next play Taumalolo was isolated at first receiver against Chris Heighington one metre out from the line. The four-pointer was inevitable and the Sharks looked like they were in for a tough night.

But in what could have been a momentum-swinging play, a flashy right-side spread ended when Tautau Moga threw a flick pass behind outside man Kyle Feldt and into touch.

In just their second set of the game, the Sharks found a huge gap up the middle of the Cowboys’ ruck courtesy of a Melbourne Storm-esque inside-out dummy half play. Hooker Pat Politoni went right to Heighington who then hit ‘Flash’ Gordon on the inside slicing through the ruck like a hot knife through butter, to draw fullback Michael Morgan and return the pass to Politoni who scored under the sticks.

Regular transmission seemed to resume off the restart however, with a dipping Morgan restart being knocked on by Jeff Robson. And if things couldn’t get worse for the experienced halfback, in the ensuing set he copped an innocuous elbow from Moga in a tackle which split him open and had him donning headgear for the rest of the night.

Just minutes later, the worst kick return team in the league used their offloading ability to perfection to ignite a break, with Blake Ayshford giving it to Holdsworth, then Valentine Holmes who scooped it straight to the waiting arms of Gordon. But he was corralled and ripped down by his opposite in Morgan with just 10 metres to go.

Cronulla looked to take the lead on the next phase when Holmes scooted out of dummy half, only to have it stripped by Thurston as he dived over the line.

The Sharks seemed primed to score this time if not for a bruising frontal hit from Kyle Feldt on Ricky Leutele.

The inspired Sharks outfit had to wait their turn, but it was third time lucky when winger Feki crossed in the corner after some slick build-up work. Out of first receiver, Robson went second-man, holding it up for Gordon who threw a beautiful 15 metre cut-out ball to Feki who finished just centimetres inside touch. When Gordon slotted the extras it was evident the home crowd were having flashbacks to another ‘unlosable’ contest when they faced the Roosters in Round 17.

Still looking lethargic, the Cowboys would force consecutive dropouts which proved too much for the visitors when Thurston twisted and spun his way through Tupou Sopoaga and Gordon next to the uprights, converting his own try to end the scoring for the half. 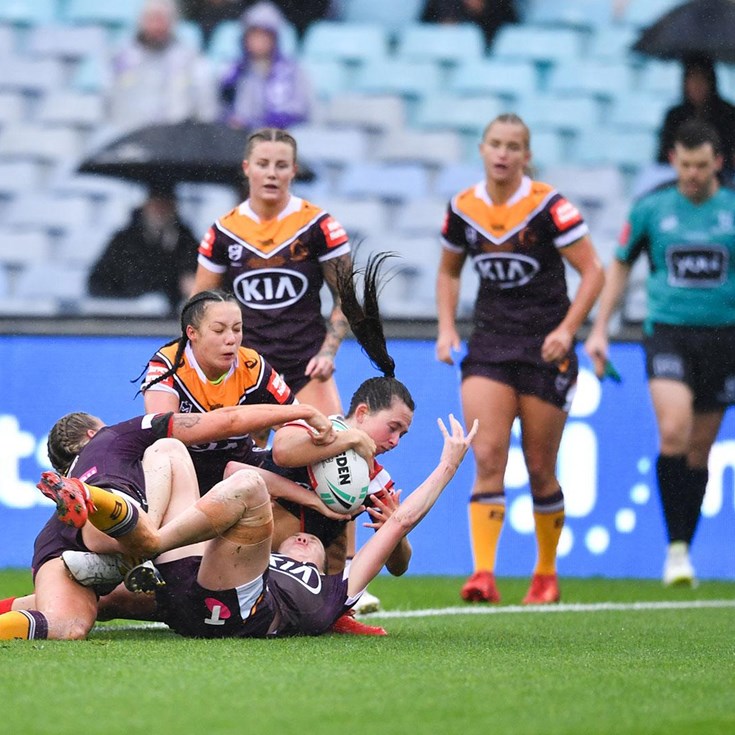 Quincy Dodd does it again

Meakes gets one back for the Roosters

Aiken slices through to set up Upton