When you look at the Telstra Premiership ladder heading into Round 9, the last thing you want to see is your team being closer to wooden spoon than the top eight.

That's the situation both the Sharks and Warriors find themselves in, after a poor start to the year which has seen them win three games and lose five.

But after a week off for the representative round, Saturday night at Remondis Stadium seems the perfect opportunity for either side to reinvent themselves this season.

The fans have been lobbying for it and it appears Shane Flanagan has been listening, with Ben Barba getting his first start at fullback this weekend, with Sosaia Feki out through injury.

The Sharks also lose Chris Heighington to suspension, but that's offset by the return of Andrew Fifita.

Draw Widget - Round 9 - Sharks vs Warriors

After spending the last round down in the NSW Cup Konrad Hurrell has been welcomed back by Andrew McFadden, taking the place of David Fusitu'a at right centre.

Dominique Peyroux also returns in an otherwise unchanged Warriors side from the last up loss to the Titans.

Watch out Sharks: Shaun Johnson put to bed an indifferent start to the season with a stellar showing for the Kiwis in their victory over the Kangaroos last Sunday. The 2014 Golden Boot-winner rediscovered his running game and the rest followed, as he clocked up 135 metres, four tackle busts, a line break and a try. When Johnson's full of confidence, trouble usually follows for opposing teams.

The Warriors are historically strong in the game directly following Anzac Day, winning four of five since 2009. It's often the time of the year where the Warriors decide to start putting some consistent performances together, and the entire squad is sure to feed off the confidence brought back from the five team members involved in the Kiwis' big win.

Watch out Warriors: Ben Barba is back in the No.1 jersey and his threat just became a little more intense. The 25-year-old has had an unspectacular season to date, playing five-eighth and coming off the bench for the Sharkies. He has run for an average of just 55 metres per game with a single line break for the season, but coming from the back of the field he will have the Warriors on high alert.

The last-up effort against the Titans featured a familiar theme in the Warriors' 2015 season; a prolonged period of poor efforts on both sides of the ball. After a fast start the Warriors went 36 minutes without scoring a single point, while they let their opponents score 20 in the same period of time.

Key Match-Up: Jack Bird v Chad Townsend. Current and former Cronulla wonderkids line up against each other on Saturday night, as Bird and Townsend face off in the No.6 jerseys. In five NRL games to date Bird has lived up to all the hype, scoring three tries and running for an average of 97 metres per game. Townsend is having his best season in first grade, handling the ball on more occasions than any non-hooker in the Warriors team and setting up five line breaks and five tries.

The History: Played 33; Sharks 18, Warriors 15. Last year's victory over the Sharks in Round 22 ended a five-game losing streak for the Warriors against Cronulla. Sydney has been a happy hunting ground for the Sharks when it comes to games against the Kiwi side, having lost just one head-to-head clash in the city since August 2010.

What Are The Odds: Sportsbet punters haven’t been scared to back the Warriors on the road with double the money wagered on them to cause an upset. In line betting, the money is running three-to-one in the Warriors' favour. Latest odds at Sportsbet.com.au.

Did You Know: Of the 18 Warriors named for this week's clash, a whopping 11 turned out for their respective nations over the representative round. With a heavy presence of Pacific Island players, and a core of the Kiwi squad, the Warriors were one of the biggest providers of talent to the international fixtures. The Sharks have five internationals backing up this week.

The Way We See It: With just three wins in eight games so far this year neither team attracts a great deal of confidence in tipsters. The Sharks have won just two of their five home matches in 2015, while the Warriors have just one away win. Cronulla have the more convincing recent form and will probably have too much grit for this Warriors side. Sharks by eight. 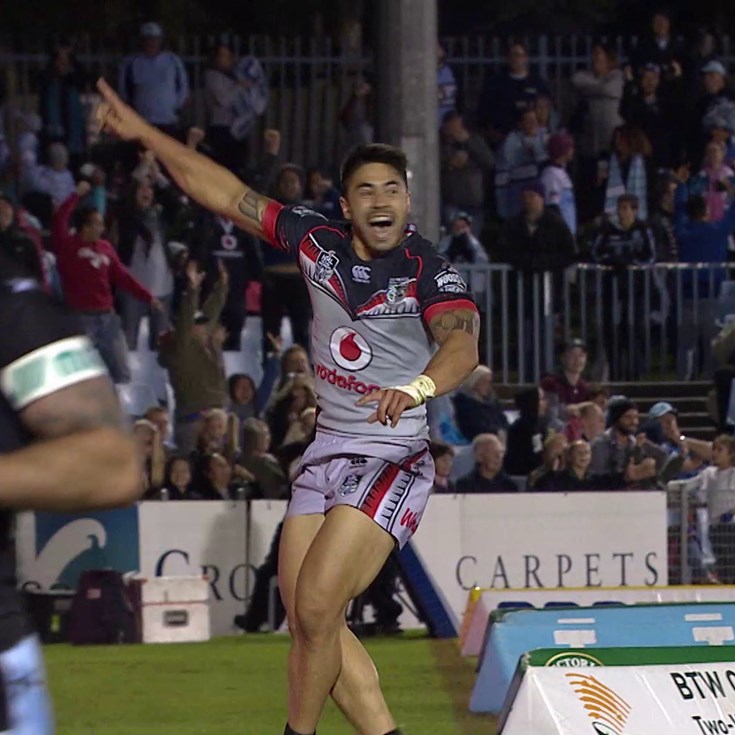 Johnson steals it for the Warriors