Confirmation of Brisbane fullback Darius Boyd's return to NRL action on Friday night isn't something that has deterred teammate Lachlan Maranta ahead of his 50th NRL game.

While other young players vying for a starting position may succumb to the pressure knowing someone with the class of the Boyd is breathing down their necks, Maranta's ability under the high ball has endeared him not only to teammates and fans, but to the man who has known him for the majority of his life – Broncos coach Wayne Bennett.

Maranta's mistake-free game and skill under the high ball has seen the 23-year-old keep the likes of Dale Copley, Daniel Vidot, Corey Oates and English recruit Greg Eden out of a Broncos starting side bristling with talented outside backs.

Draw Widget - Round 9 - Broncos vs Panthers

A Broncos ball boy from the age of five, the grandson of Broncos co-founder Barry Maranta and the son of former Brisbane, Parramatta and Gold Coast winger Brett Plowman, Maranta's skill under the high ball can be traced to two unlikely sources – his mother, Robyn, and former Brisbane goal-kicker Michael De Vere.

"I remember when I used to ball-boy at ANZ [Stadium] (now known as the Queensland Sport and Athletics Centre). Mick De Vere was the goal-kicker and the stands were a bit further back so when they'd kick a goal I'd actually have a chance to catch it," Maranta told NRL.com.

"But when we moved to Suncorp [Stadium] obviously most goal-kickers kick it into the stands so you never had a chance.

"To be honest my mum helped me with my high-ball the most. She was down at [Brisbane's] New Farm Park with me as a little kid teaching me how to catch them.

"She was doing anything she could. For a few years there she kept beating me in our own little game and if I won I got Red Rooster on the way home – so she's probably the one who taught me the basics."

Those basics have seen the Wests Panthers Bardon junior become one of the most reliable bomb diffusers in the competition.

Maranta has gobbled up 36 kicks so far this season and has only one mistake to his name – a spilt bomb against the Titans in Round 5 – although that mistake didn't lead to any opposition points being scored.

Despite being one of the most reliable outside backs at the Broncos, Maranta knows he must impress Bennett on a weekly basis in order to keep ahead of Brisbane's other hungry backs starving for game time at the top level.

Bennett has known Maranta since his mum Robyn was the master coach's secretary during the 1990s.

"All I can do is play good football and let Wayne make the decisions. If I'm doing that I'm putting my best foot forward and hopefully I'll stay there," he said.

"I wouldn't want to say I'm ahead of [the other outside backs] because I don’t want to sound up myself, but you always have to be a quietly confident.

"If you're not confident coming into a game it diminishes your performance."

The Broncos are currently on top of the Telstra Premiership ladder and will be seeking to increase their lead with a win over the injury-hit Panthers on Friday night.

Brisbane has won six out of their past seven games after their Round 1 loss against the Rabbitohs and Maranta has been soaking up every bit of the club's early-season success.

"I'm enjoying my football so much this year and I think everyone in the team is and it's really starting to show in our performances," he said.

"When we're winning the vibe in the dressing room is the best it's ever been – I've never experienced something like it and I'm just taking every game as it comes."

Maranta is Brisbane's joint leading try-scorer this season alongside Anthony Milford with four tries and has 16 tries from 49 NRL games since debuting in Round 14, 2012.

Contracted to the Broncos until the end of 2016, Maranta's four seasons in first grade has been a whirlwind, with the dependable winger failing to realise he was about to play in game No.50.

"Not in my wildest dreams," Maranta said, when asked about whether he thought the transition from ball boy to first-grader would become a reality.

"I still pinch myself every game I go out there. I'm lucky to play one [game] and lucky to play 50 but I still treat it like it's my first game." 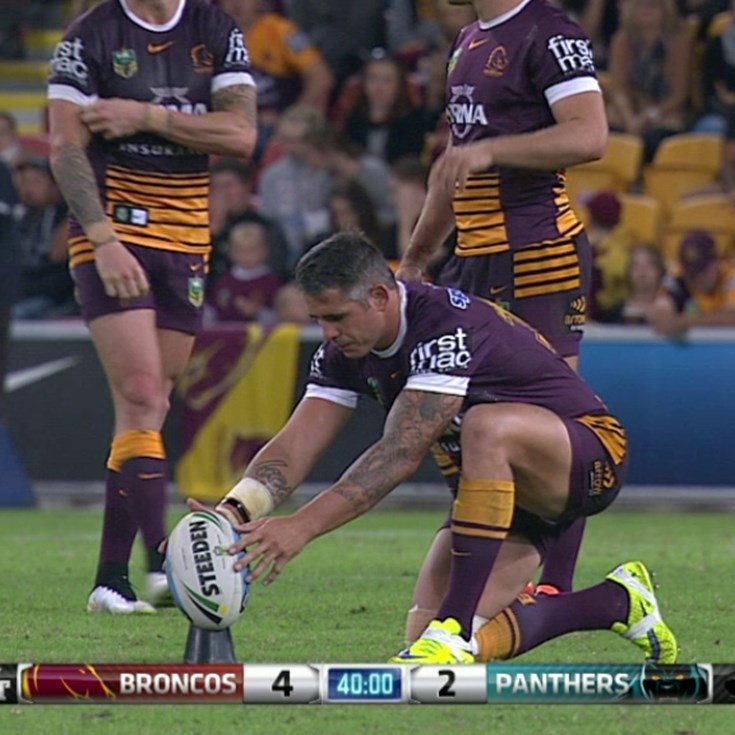