Bottom placed Manly Sea Eagles have made it two wins on the trot with a comprehensive 30-10 victory over the Newcastle Knights who succumbed to their fifth straight loss.

On a pristine Brookvale Oval surface much improved from a 51 days rest, the Sea Eagles looked just as rejuvenated as the ground they were playing on, out enthusing their opposition to dominte all but 10 minutes of the game.

Both teams were missing a star playmaker but the Sea Eagles adapted far better to the loss of Kieran Foran, Daly Cherry-Evans starred under the heightened pressure while Tyrone Roberts was unable to spark points for his Jarrod Mullen-less side.

After a high quality opening to the game, Manly winger Jorge Taufua opened the scoring in the 19th minute, barging over off the back of a slick backline movement. The Tongan winger must have had visions of Sam Kasiano as he headed for the corner, but thankfully for him, this time his defender Akuila Uate couldn't do enough to deny him.

The men from the northern beaches were at it again moments late with an amazing try that ignited the home crowd. Following brilliant lead up work from Cherry-Evans and Peter Hiku, Brett Stewart entered the prestigious company of the 150 NRL tries club, just the 10th player to reach the milestone in the history of the game. Cherry-Evans ignited the movement by skipping across field before landing a superb cut-out ball on the chest of Hiku. The Manly centre turned Uate inside-out before grubbering the ball perfectly to the try line, where Stewart was first to pounce.

The final few minutes of the half finished in a flurry, starting with James McManus being denied a near try. Dane Gagai was similarly refused soon after as he dropped the ball onto the ground while attempting to kick near the line.

In one of the game's pivotal moments, McManus then made a meal of a kick directed at the sideline from Jamie Lyon to give the home town boys a final crack at the line. The Sea Eagles took the opportunity with both hands after a superb piece of ball play by their No.7. He disturbed the Knights defence by faking the wide pass before finding a charging Ligi Sao short, allowing the Kiwi to cross unopposed for his first NRL try. That score made it 18-0 at half-time following a third Jamie Lyon conversion.

The Knights finally opened their account in the 47th minute, in much the same fashion as the Sea Eagles claimed their first. McManus planting the ball down in the corner after some nice lead up work by Roberts, Dane Gagai and Joey Leilua.

The Knights began to gain the ascendancy of the next 10 minutes, holding an advantage in the territory and constantly threatening the Sea Eagles goal line defence. However the Novocastrians lacked a killer punch, while the Manly defenders were working hard to defend their line.

It was Cherry-Evans who again took control and turned the tides in the 57th minute with a brilliant 40/20 kick. It was a classy piece of play by the mercurial playmaker and it paid immediate dividends for his team with Stewart scoring again with a looping run getting to the outside of the Knights defenders.

Cherry-Evans put the result to bed with a well-deserved try in the 67th minute, supporting off the shoulder of Blake Leary who had found space thanks to a deft Stewart offload.

Tariq Sims powered over to score in the game's dying minutes after a short ball put him one-on-one with Cherry-Evans. Roberts conversion brought the scoreline to 30-10. 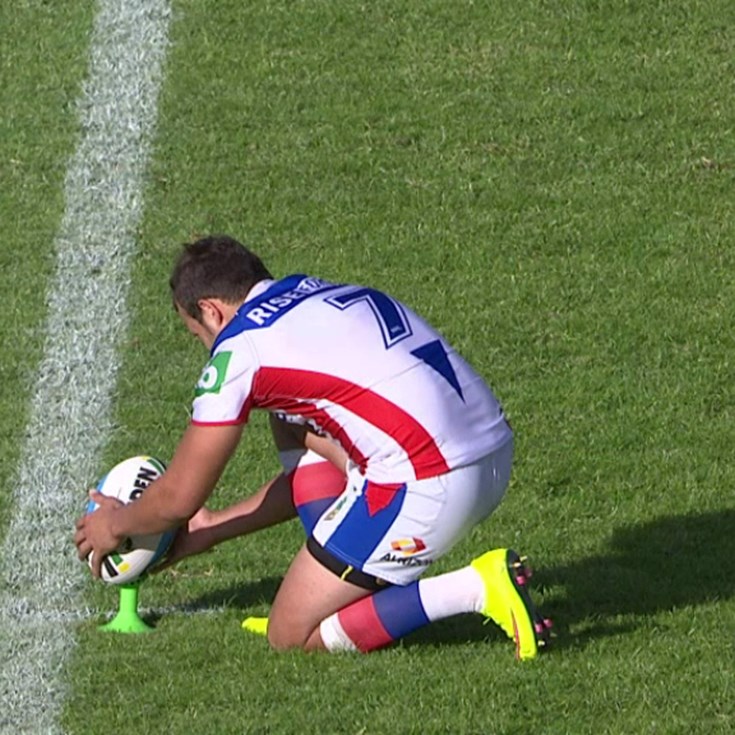