If he hadn't scored two tries and kicked the field goal that won his team the game in golden point extra time, Saturday night may have been one to forget for Sharks winger Valentine Holmes.

Holmes made two crucial errors that put his team under lots of scoreboard pressure against the Titans, perhaps to be expected of a 19-year-old with less than 20 games in the top grade; but what most pleased coach Shane Flanagan was that he didn't once lose his nerve.

With the game on the line Holmes wanted the ball in his hands and – as he did with a spectacular sideline field goal in the final of the Auckland Nines – he delivered his team a clutch play just when they needed it the most two minutes into extra time.

Flanagan said that another narrow loss could have had a devastating impact on his team and was grateful that despite his errors, Holmes had the courage to take the responsibility normally reserved for more senior figures.

"I think that's young blokes these days," Flanagan said of his willingness to own the moment.

"He didn't have his best night. He dropped a couple and they scored tries on the back of it, he batted one over the dead-ball line that he probably should have caught and we had to defend that set so it wasn't his best night but the confidence that he had to come in there and call for that football and say, 'I want it, I want to win the game for the club' is really important.

"He's a quality player and a quality kid; he's got a lot of NRL in front of him."

Having scored a double against the Titans back in Round 4, Holmes' first try in the return bout on Saturday night was a crucial blow just before the half-time break while his second came as a gift from Gold Coast opposite Anthony Don who made a rare error on his own try-line in trying to catch a Ben Barba bomb.

Despite the pain of what his team had been through seven days earlier against the Warriors, Holmes said after the game that he didn't want to be anywhere else than in the thick of the action.

"No one is really that confident doing it (taking field goal attempts) and I'm up for whatever and I think 'Pricey' (Sharks assistant coach Steve Price) wants me to take that on. I like taking challenges on and being under pressure," said Holmes, who has now scored 10 tries in 15 NRL games.

"I love doing that and being put under pressure. I feel like it's a good challenge for me. I'm up for whatever."

The extent of Holmes's field goal practice consists of contests with rookie Jack Bird after training at Cronulla but despite his youthful exuberance, he understood completely the significance of what his wobbly kick from 30 metres meant for his team.

"We were talking about it the whole week, the importance of that win," Holmes said.

"It's pretty much four points for us going into a bye and I'm real happy with how the boys went.

"There were a couple of games before where we let go of and they got away with it but I think we can learn from that and keep going forward with wins."

It's been a steep learning curve for the Townsville-born Holmes who has pledged his representative allegiances to Queensland and Australia despite being invited to be part of New Zealand's Four Nations squad last year.

He scored a spectacular try for the Junior Kangaroos in their win over the Junior Kiwis in the representative round and said he is taking every chance he can to learn from rep stars such as Luke Lewis and Paul Gallen at the Sharks.

"Luke Lewis is talking to me heaps and I'm learning heaps from him," said Holmes.

"Just tonight after the game he was talking to me and saying he was proud.

"I always listen to all the older boys, especially like him and 'Gal' - they always talk to me about how I'm going and where to keep my head space." 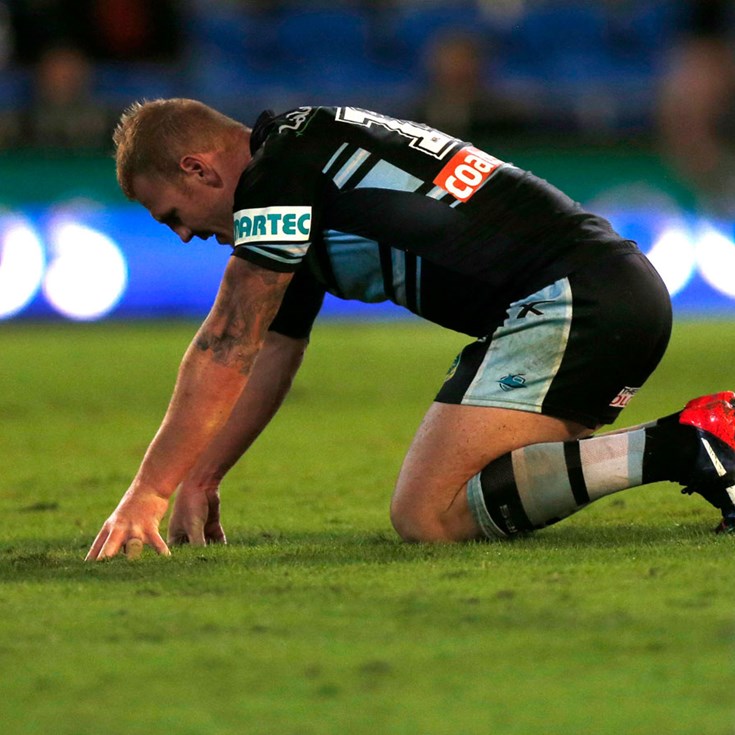 'Dizzy' Lewis will be ready for Origin