A desperate Manly travel north for the second week running to take on another Queensland-based side currently high on the ladder and even higher in confidence.

The Sea Eagles can ill afford returning from another trip to the Sunshine State without the two Telstra Premiership competition points after their last-minute 18-14 loss against the Cowboys in Round 12.

Sitting last on the ladder with only three wins from 11 games, Manly are in danger of missing out on the top eight for the first time since 2004 if their fortunes don't improve during the second half of the season.

The same can't be said for the Brisbane who are flourishing under returned coach Wayne Bennett with nine wins from their first 12 games.

The Broncos sit second behind St George Illawarra on for-and-against and are beautifully positioned heading into the remainder of the Origin period with byes due next weekend and again in Round 17.

In team news, skipper Justin Hodges returns to the centres while Corey Parker will be rested and replaced by Sam Thaiday who returns from a break of his own.

Only three days after finishing off Brisbane's contender for team try of the season, winger Lachlan Maranta has been omitted in favour of Jordan Kahu with Daniel Vidot retaining his place on the opposite wing.

Manly coach Geoff Toovey has named an unchanged 17 with the only addition being Feleti Mateo who returns on the bench in place of 18th man James Hasson.

Watch out Broncos: After only three tries in six games, including a run of four straight games without a try, Manly fullback Brett Stewart has scored four in the past fortnight.

He recently overtook Steve Menzies' try-scoring record and sits as the greatest try-scorer in Sea Eagles history with 153 tries from 208 games. The 30-year-old has scored seven tries from 14 appearances against the Broncos, but hasn't scored an NRL try at Suncorp Stadium since 2008.

The one-club man has made three line breaks, three try assists and two try saves from his nine games this season and will need to be monitored closely on Friday night.

Watch out Sea Eagles: Fresh from sitting out the Raiders game, Broncos Origin duo Sam Thaiday and Justin Hodges will be champing at the bit for a return to action on Friday night. Both players were busy in Origin I with Thaiday making 103 metres and 38 tackles, while Hodges gained plenty of territory with 195 metres from 18 runs with 12 tackles.

Hodges has only one try to his name so far in 2015, although his lack of four-pointers is offset by five try assists. His battle against fellow veteran centre Steve Matai will be an intriguing one.

They'll be up against Manly's right edge of Blake Leary, Jamie Lyon and Peter Hiku who, with the exception of backline utility Hiku, are solid as a rock in defence and are well equipped to halt any left-sided raids by the Broncos. Stand-in five-eighth Lyon is averaging 19 tackles per game in 2015 with a 90 per cent tackle success rate, while Leary averages 30 tackles at a rate of 96 per cent.

The newly re-signed Daly Cherry-Evans is set to make his return from injury in another boost for the Sea Eagles, while Manly recruit Leary will play at Suncorp Stadium for the first time since the Northern Pride's victory over Easts Tigers in the 2014 Intrust Super Cup grand final.

The History: Played 39; Broncos 18, Sea Eagles 20, Draw 1. Manly have dominated this clash in recent years winning 10 of their past 13 games against Brisbane dating back to 2007. The Broncos won 36-10 against their opponents last season although this was on a Sunday afternoon; the last time Brisbane won a night match at home against Manly was in their 2006 premiership year.

Did You Know: Sam Thaiday will play his 219th Broncos game on Friday night and in doing so will overtake Tonie Carroll's number of appearances for the club and move into outright ninth position for number of games played for Brisbane.

What Are The Odds: Broncos $1.39 v Sea Eagles $3. Three times the money has been invested on the Broncos in head-to-head betting. Sportsbet also reports that the most popular margin is Brisbane 13+. Latest odds at Sportsbet.com.au

The Way We See It: The Sea Eagles usually always find a way to turn up and compete against the Broncos so the home team cannot take their opposition lightly and nor would Wayne Bennett want them to. Recent form and current ladder positions can be thrown out the window for this clash with both sides always up for the challenge. After a hard slog against Canberra and with a bye due following their Manly clash, Bennett will want his troops to lift that extra gear against what is perennially a top-four side. This is a real danger game for the Broncos although they should sneak home by six points. 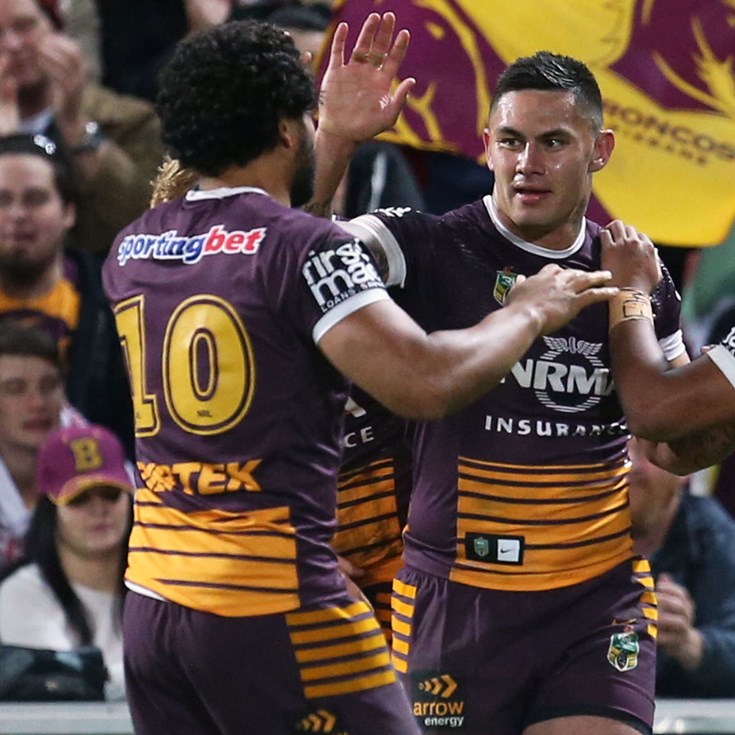