The votes have been tallied, and the winners and losers have been decided from Round 1 of NRL.com's Origin Knockout poll, determining who is the fans' favourite State of Origin player of the century so far.

A total of 64 players who had represented their state since 2000 were pitted against each other in 32 match-ups in Round 1, with some cruising through the opening round and others squeezing through after tight battles.

Round 1: Mate against mate in Origin Knockout
See the full playoff bracket after Round 1

Vote now on this week's match-ups for Round 2.

The most-capped Origin player in history, Lockyer made light work of Brad Thorn in the first round of Origin Knockout and faces off against the tough-as-nails Brent Tate in round 2. Tate has been one of Queensland's most faithful servants over the years, but it's hard to see the wide man getting the edge over Lockyer here.

Now this is a blockbuster. One of the outstanding props of the early 2000s goes up against the best prop in the current Kangaroos side. Webcke was a fixture for the Maroons from 1998 until 2004, finishing his career with four premierships for the Broncos. Scott began his Origin career in 2006 and has been Australia's best front-rower for the past few years – and is as playing as well as ever, scoring two tries in a stunning performance for the Cowboys against Manly on the weekend to become the first player in 2015 to score more than 100 NRL Fantasy points in a single game.

Speaking of NRL Fantasy, these are probably the two greatest Fantasy players of the century so far. Both more than just pure stat machines though: Smith controls a match like no other dummy half, running the attack, sweet-talking the referees, barely making a mistake and making about 50 tackles a game to boot. Meanwhile the greyer Corey Parker gets, the better his football gets, with the Broncos lock a master of making the tough metres, getting away the tricky offloads and eating up tackles. Oh, and they both kick goals too.

These two golden oldies waltzed through the first round but face a huge test here. Civoniceva was the oldest player to play State of Origin at the age of 36, at the end of a career spanning 33 Origin matches and 45 Tests for Australia – and six more for Fiji – while Langer had already proven that age was just a number with a stunning return to the Origin stage at the age of 35 in 2001. Does little Alfie get your vote ahead of big Petero?

Two of Queensland's modern stars, Thurston and Hodges have helped make the Maroons (almost) unbeatable for much of the past decade. Both went from precocious youngsters to genuine superstars during their careers, with Thurston probably the best playmaker in the NRL and Hodges one of the game's classiest centres and best ball-runners – especially out of dummy half.

Two thirds of the 'Big Three' that has been at the centre of the modern success of the Melbourne Storm and Queensland Origin sides, Cronk and Slater will be tough to split. After spending years as a utility on the bench behind Thurston and Lockyer, Cronk became the chief organiser for the Maroons and Kangaroos, while Slater emerged as the best fullback in an era of great fullbacks.

Once upon a time, wingers and fullbacks were the smallest players on a rugby league field; speedsters who tended to avoid the rough stuff. That's before the 6'3 Wendell Sailor revolutionised the role of winger and the 6'5 Inglis changed the importance of the modern fullback. Still a centre at Origin level, Inglis has been one of Queensland's primary weapons in recent years, while Sailor was a Maroons superstar in the late 1990s and early 2000s.

Two of Queensland's great aggressive back-rowers, Tallis was a beast for the Maroons at the start of the century (relive his legendary 'rad doll' tackle on Brett Hodgson as proof), while Thaiday remains one of his team's most fearsome competitors, 23 games into his Origin career. 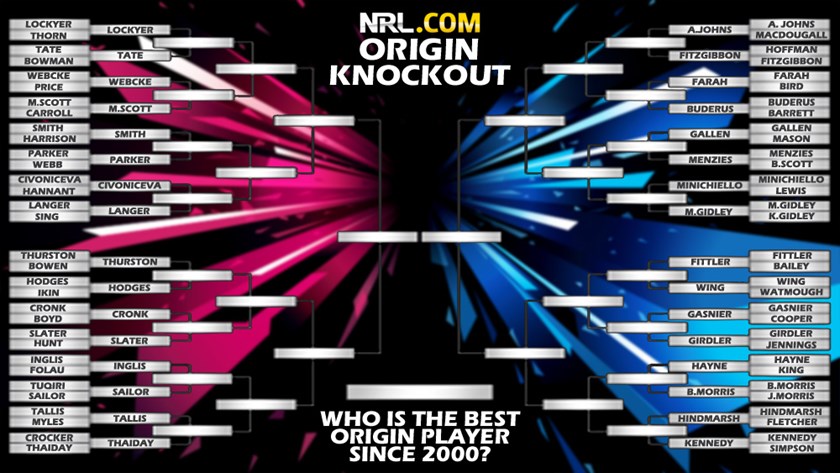