They came, they saw, and they conquered the Newcastle Knights on Saturday afternoon – such was the nature of the Canberra Raiders' dominant 44-22 win. Here are the five key points to come out of a game which at least temporarily sent the Green Machine into the NRL's top eight.

Draw Widget - Round 13 - Knights vs Raiders

Ending their three-game losing streak in Newcastle, the Raiders' fast start was hugely influential in how the game panned out. Up 16-0 after 20 minutes, the Raiders raced away with the lead early and never looked like giving it up against a struggling Knights outfit.

It was a nice change of pace for the Raiders, who in their past three games have twice trailed 12-0 and once trailed 26-0 inside the first 20 minutes.

"We haven't been starting slow because of preparation or getting to the game sluggish or anything. We're ready to go, it's just been other teams have been good," Canberra coach Ricky Stuart explained post-game.

"We have had the ability to get back on the horse, regain a bit of momentum and then get back into past games but you can't keep doing that. You can't keep coming back every game so we didn't want to keep giving teams three or four tries start."

It doesn't get any easier for Newcastle

Already missing halves Jarrod Mullen and Tyrone Roberts as well as linchpin forwards Robbie Rochow and Jeremy Smith, life in Newcastle got even tougher on Saturday after being dominated by the Green Machine – their eighth loss in nine games.

Newcastle will have to deal with a serious biceps injury to Jack Stockwell and David Fa'alogo's hamstring strain over their upcoming bye weekend.

"It doesn't get any easier. The opposition played alright I just don't think we handled the start particularly well at all, especially our defence in the middle," Knights coach Rick Stone said.

"It was disappointing, we have had a couple of big weeks travelling and I still think our expectation was a little bit better than those first 15, 20 minutes, that's for sure."

Not only did Canberra captain Jarrod Croker draw level with Raiders legend Mal Meninga in the club's all-time try scoring list against Newcastle, but he also become the third Raider to reach 1000 points scored for the club.

Joining Dave Furner and Clinton Schifcofske as members of the Green Machine to achieve the milestone, Croker's 20-point haul in the Hunter means he only requires 201 points to become the leading point-scorer in Raiders history.

"Jarrod achieved a great milestone and he's going to go on and break all the records at this club," Stuart said. "I was really excited for Jarrod because it's a big effort and being so young into his career and achieving that, we just congratulated him there in the change rooms. It's a huge effort for an individual."

What do the Raiders do with Sam Williams next year?

Blake Austin is starring and 2016 Raider Aidan Sezer is in career-best form at the Titans – so what are the Raiders exactly supposed to do with Sam Williams next season?

Under contract until 2016 though most likely to be a second-string half, the halfback produced four try assists for Canberra in a commanding performance against Newcastle and provided the perfect foil for livewire Austin.

If the Raiders don't want him playing in the NRL next season then Williams is doing everything right to earn a contract elsewhere. Any number of clubs could do with his presence on current form.

While it would be unfair to say his heart isn't in it, the Newcastle centre's past fortnight of performances has been atrocious.

Against the Warriors last week Leilua conceded two penalties, missed two tackles and made an error, while against the Raiders the centre dropped the ball three times.

The axe looms for Leilua if he doesn't pick his game up soon. With the club's halves close to returning after next week's bye, and with Kurt Gidley and Dane Gagai expected to move back to fullback and centre respectively, Leilua needs to work his hardest to avoid being the odd man left out. 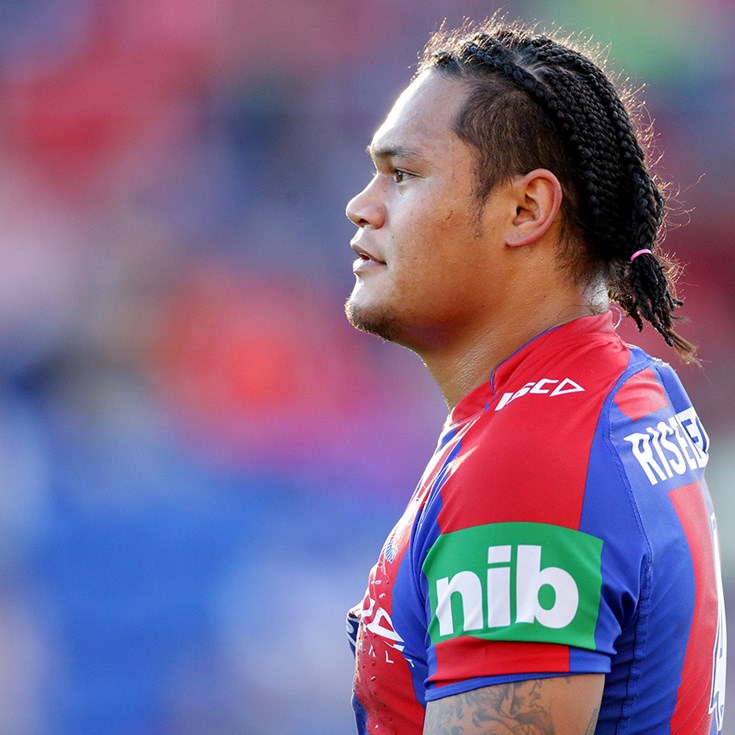 Cousins could link up at Canberra

Knights 'let our fans down': Gidley

Raiders too slick for error-prone Knights