In a dour 80 minutes, an error prone Panthers were shut out 20-0 by an improved but underwhelming Storm side. Here are five of the key points from the win.

Slater's fill-in a star in the making

With Storm fullback Billy Slater missing his fifth game of the year as he manages a shoulder injury through the problematic mid-year Origin period, his replacement Cameron Munster had yet another standout game.

Munster came up with a bell-ringer of a hit on Panthers winger David Simmons to shut down an attacking raid from Penrith. Later, having been bumped off by a rampaging Waqa Blake who seemed destined to score he recovered to help Cooper Cronk pull off a try-saver. In between, he produced a huge fend on Panthers skipper Peter Wallace to score a fine solo try.

"He's still sort of finding his way around with the footy to be quite honest, he's not getting on the ball as much as we'd like but that's expected because he hasn't played with these guys, this is only his fifth or sixth game," Storm coach Craig Bellamy said after the game.

"I think Munster's best trait is when he made that tackle down there against David Simmons, he whacked him. He's not a big guy but he's brave and he's tough. He's still a long way to go for him to learn about the game but those couple of traits are going to make him a good player."

Panthers must move on despite injuries

While Panthers coach Ivan Cleary was hopeful Jamie Soward would return in Round 15 after the side's bye next week, fullback Matt Moylan is still at least five games away and he said the side simply needs to get on with life without a host of injured stars – which still includes Kangaroos winger Josh Mansour, who is also chance for Round 15, and prop Brent Kite, who is still a way off.

"[Soward] probably could have played but I don't think he could have contributed what he needed to, and with a bye next week... It's a significant injury so hopefully he can come back after that," Cleary said of his five-eighth.

Of the overall injury toll he added: "We haven't had people all year."

"With key players missing [it] throws out some of your combinations but as I said we've had that most of the year and we have to get on with life," he said.

"We'll hopefully have Jamie back but Matt's not going to be back for a long time, we're just going to have to get on with life and we can certainly do better than what we did tonight."

Storm not so soft after spray

Bellamy didn't go easy on his troops after a dire effort against the Roosters last Monday night, saying they hadn't been soft this week in a far stronger defensive effort.

"We were a lot better defensively tonight, there was a lot more effort there. It wasn't soft," he said.

"Again we struggled to score points, especially in that second half and obviously Penrith struggled the whole game really.

"I don't think the second half was a great spectacle but having said that I was really rapt with the way the players responded after Monday night defensively. The effort that we put in defensively was tremendous."

Draw Widget - Round 13 - Panthers vs Storm

Errors the story of the night

Penrith didn't have a lot of luck but nor did they give themselves any chance to be in the contest. They completed nine of their first 18 possessions for a 50 per cent opening half and none of their first three sets after the resumption to at one stage slip to 40 per cent with 10 from 25. A late improvement with the match already decided saw the rate creep back up to 50 per cent with 18 from 36. The Storm were a passable 30 from 39 or 77 per cent, although forward Tim Glasby managed to notch more individual errors than any Panther with four. For Penrith, stand-in fullback Dallin Watene Zelezniak and rookie winger Waqa Blake had three apiece while a host of others had two.

After the match, coach Ivan Cleary was philosophical, saying injuries to key players had forced him to use more inexperienced players than he'd like.

"We've got a lot of young guys out there making mistakes as well, that's all part of what we have, some of these young guys are having to play too much because we had so many injuries, they're learning the hard way," Cleary said.

Scrum feeds a bone of contention

Not much went right for Penrith on the night which was summed up by two contentious scrum feed rulings.

In just the fifth minute, a Munster grubber bounced up and hit the arm of Penrith centre Isaah Yeo before then being kicked into touch off a Storm boot.

Penrith were given the feed but as replays ran while the scrum was packed the touch from Yeo was ruled a knock on and the feed given to the Storm, who scored the first try of the game from the ensuing set.

Then in the 14th minute, a well-worked Penrith right-side play came undone when the ball was passed into touch by Dean Whare. Despite a suggestion the ball came off the arm of Melbourne's Tohu Harris, and despite anguished requests from Wallace to examine how the ball went into touch, referee Adam Devcich proceeded with the scrum giving Melbourne the feed. With the aid of a penalty later in the set, the Storm marched downfield and scored their second.

Wallace didn't want to be drawn on the incidents after the game, other than to say it was typical of how the game played out.

"Yeah I thought he touched it out, the second one, for some reason they didn't look at it which they did for the first one. It's just the way it went for us tonight I think," he said. 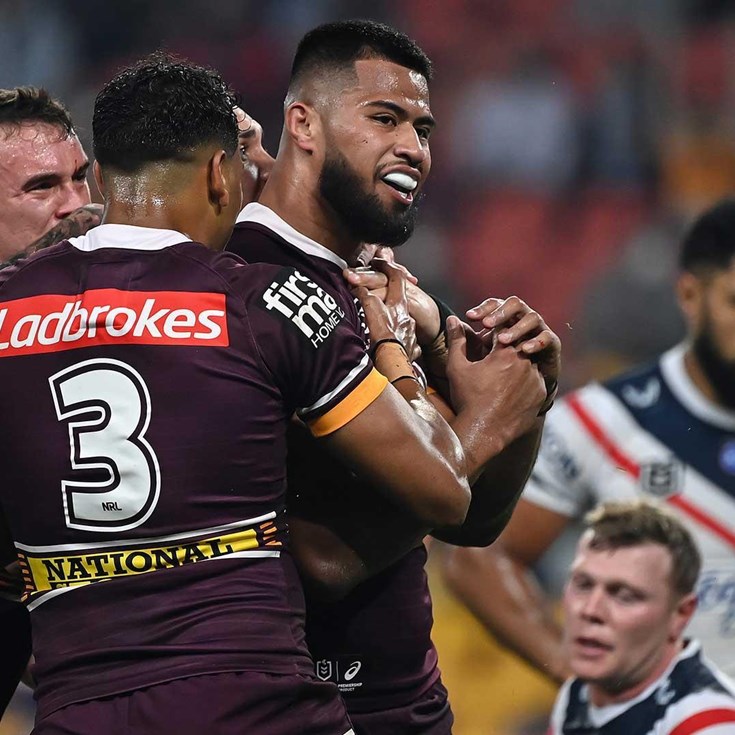 Poor Panthers effort a while coming

Injured Storm duo should be fit for Origin