After a 24-point comeback that simply had to be seen to be believed, here are five of the talking points from one of those games that years later will have people saying "I remember where I was when that happened."

A comeback for the ages

It wasn't quite the biggest comeback of all time, although the Cowboys do own that record due to a 26-point reversal against Penrith in Townsville in 1998 (a record they now share with Penrith, who also overturned a 26-point deficit against the Warriors in 2009) but the manner in which it came about had its protagonists speechless afterwards.

"It was a huge comeback. Surprised, I don't know if that's the right word, but I was certainly pleased," said an understated Cowboys coach Paul Green.

"I knew we had the attack part in us. I knew we could create some opportunities if we could just back some sets up. It was a massive effort for the boys to do what they did."

Cowboys skipper Johnathan Thurston was an instrumental player in last year's finals series when the Cowboys almost set a record that may never have been broken, coming from 30-0 down against the Roosters to level the scores before losing 31-30 and having a late match-winning try disallowed. He was also the orchestrator of a late comeback from 16-4 down against the Storm in Round 4 to earn his side's first win of the season after three losses.

"We've learnt how to win in different ways. We've won in tight games, we've made plays with limited time on the clock to win games, we've chased down a big lead tonight. It just gives you that experience to draw on when you do get in that situation. Ideally you don't want to get yourself in that situation again, but when you do get in that situation, if you don't have that experience to draw on, sometimes you tend to tighten up and think you need to come up with a big play, or something exceptional to get yourself back into the game when usually that's not the case. That's how we got ourselves back in the game there tonight."

Right-edge defensive breakdowns spelled the end of North Queensland’s 2014 campaign when the Roosters torched them for 30 first-half points in the semi-final, and Monday night proved that side of the field is still very much a work in progress.

Michael Morgan has done a good job of communicating with his outside men since shifting to five-eighth, but the whole frontier came unglued on Monday night in what Thurston described post-match as the worst half of footy the Cowboys have played all year. Playing with vastly superior energy and enthusiasm the whole first half, Parramatta sent the Steeden from sideline to sideline and managed five line breaks in the first 40 minutes alone.

Parramatta sensed a weakness and they honed in on it from the very start when Brad Takairangi put Corey Norman away down the left for the first try in the third minute. With young gun Tautau Moga out for the season, the Cowboys must continue to develop the Matthew Wright-Justin O’Neill combination over the second half of the season.

"I didn't think we got ourselves into the game at all in that first half and then when we were asked to defend our line, we leaked points pretty easily," Cowboys coach Paul Green said.

"But I knew if we could control the ball and kick the ball and play a little bit, I knew we'd get some opportunities."

Mind over matter for Parramatta

For the third time in four weeks second-half switch-offs have brought the Eels undone. It is only Round 13, but at 4-9 their season is in jeopardy when they should probably be on equal footing with the top eight, had they finished off New Zealand, South Sydney and North Queensland in recent weeks.

Coming into Monday night the Eels had completed the highest number of second-half tackles this season. By half-time the Eels held a 60 per cent possession rate; by full-time the Cowboys owned 53 per cent of the ball. While the Eels coughed up just four errors in the second half, they were poorly timed.

Semi Radradra dropped the ball in a tackle from a 20-metre restart, which led directly to the first of five consecutive Cowboys tries. The Eels defence cracked easier than eggshells at the first hint of a momentum swing in which Parramatta went 15 minutes without even touching the ball. The Eels’ lack of composure also showed in their inability to adjust defensively, as four of the Cowboys’ five tries came from the boot.

"We're a 70 minute team. We've got to be mentally tougher. When momentum swings against us we just don't know how to wrestle it back," lamented Eels coach Brad Arthur after the game.

It may be lost in the washup given the way the team capitulated in the final 20 minutes but the headaches – both literal and figurative – caused by the Parramatta left edge of Corey Norman, Manu Ma'u, Brad Takairangi and Semi Radradra – cannot be overstated.

On its day it is one of the most devastating edges in the NRL.

Ma'u hit the ball up with a ferocity possibly not seen since he came as a bolt from the blue in his NRL debut against the Warriors last year in a match-winning hand, cutting the Warriors right side to shreds.

His wind-ups on Monday night were truly formidable and while the stats may "only" read 105 metres from 13 runs with three tackle breaks and two offloads, his partnership with lanky centre Takairangi and explosive winger Radradra, and the combination with dangerous five-eighth Norman, played a role in all five of the Eels' tries, which were all scored by those four men.

If the Eels can channel that attack while not switching off for periods there is plenty there to build on.

In-form Cowboys custodian Lachlan Coote probably hasn't got the same plaudits as the likes of Thurston and Michael Morgan over the 10-game winning streak but his role shouldn't be understated.

On Monday night he ran over 195 metres for the fifth straight game, notching 216 metres and setting up two tries.

Given Morgan's impressive form at the back last year there were questions over how Coote would even fit back into this side but those questions have long since been answered.

"He's going real well, he's got some confidence in him again after only playing a handful of games over a number of years. It's awesome that he's able to string a few together and play well while he's doing it," five-eighth Morgan said of the man to have succeeded him in the No.1 jersey.

"Yeah mate I'm real stoked at the moment, just being happy being out on the park," Coote told NRL.com.

"Hopefully the run of injuries have gone out of the way, just loving my form at the moment and hopefully I can keep working with Johnno [Thurston] on our combination and take it one week at a time." 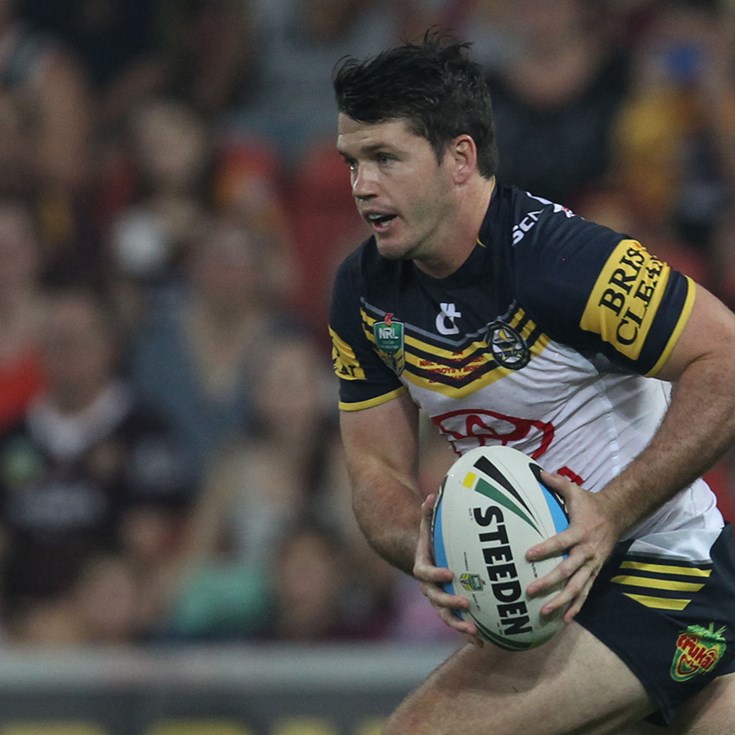