Melbourne will play Monday night's game without their captain, champion fullback, two leading try-scorers and key playmaker. Surely they can't win, can they?

Then again they are coming up against a side that is about as consistent as the Melbourne weather.

Parramatta's Jekyll and Hyde persona was on full display last Monday when they raced out to a 30-6 lead against the Cowboys, only to concede five tries in 11 minutes and lose by six.

Now they must take the southern road trip, where they have won just one time in their past nine visits.

Melbourne bounced back emphatically from their horror showing against the Roosters with a shutout 20-0 victory over Penrith.

However this week marks that time of the year again for the Storm, who must do without their four Queensland Origin stars on Monday night.

The last time they played without the Big Three was in Round 14 last season and that actually ended in a memorable four-point win over the Gold Coast. The young brigade has been called upon to do the job yet again.

Kurt Mann will stand in for Will Chambers, Young Tonumaipea slots into the bench for his first game since Round 4 while Ryan Hinchcliffe will assume captaincy duties from Cameron Smith and turn back the clock to his junior days when he shifts to hooker.

Will Hopoate is the sole Origin player missing for the Eels who have called upon Bureta Faraimo to fill the void as Ryan Morgan moves to the centres and Daniel Alvaro makes way for Darcy Lussick on the bench.

Watch Out Storm: With Origin taking its toll, even blind Freddy would be able to figure out why Storm fans are concerned ahead of Monday night. Their side will enter the game without their captain and top points scorer Cameron Smith, try assists leader Billy Slater, joint leading try scorers Will Chambers and Marika Koroibete and mercurial kicker Cooper Cronk. That mean 983 games of first grade experience will be absent from this Melbourne team, with their replacements of Mann, Tonuamaipea, Richie Kennar and Cameron Munster having just 57 games to their name between them. It is a daunting gap in experience and one that has thrown a significant curveball to this 3rd v 15th matchup.

Watch Out Eels: Right side, weak side. It is like we beat the same drum every week about the Eels' defence which ranks as the worst in the competition, conceding more than 24 points per game. Their right side is the leakiest rudder in this ship. Four of the Cowboys' five second-half tries came through this area last Monday and with no Will Hopoate it becomes an even greater concern heading into this game against the Storm. Parra will be counting their lucky stars they don't have to face Marika Koroibete but they must find a way to patch up what has been a significant hole this season.

Key Match-Up: Jesse Bromwich v Junior Paulo. When Melbourne were without the Big Three in Round 14 last year it was Bromwich who stepped up and carried the Storm on his back. With 184 metres he was unstoppable that night and will need to be again if his are to record another famous win. Paulo is the main entrusted with making sure that does not happen. He did not play when these two teams met earlier in the season, a game that Bromwich was again a difference maker with 174 metres. This Kiwi matchup will be a critical one and could well decide the fortunes of their respective sides.

The History: Played 29; Storm 18, Eels 11. The Storm have won five of the last six games between these two teams by an average margin of 29.2 points.

What Are The Odds: Sportsbet has received 50 per cent more money on the Storm and 13+ is the most popular in margin betting. If the Eels scoot out to a big lead, punters might not be able to resist the urge to 'Cash Out' after the Eels' capitulation on Monday night. Latest odds at Sportsbet.com.au

The Way We See It: The Eels have been very poor this year but given the outs for the Storm they have arrived in Melbourne town just in time. Eels by six. 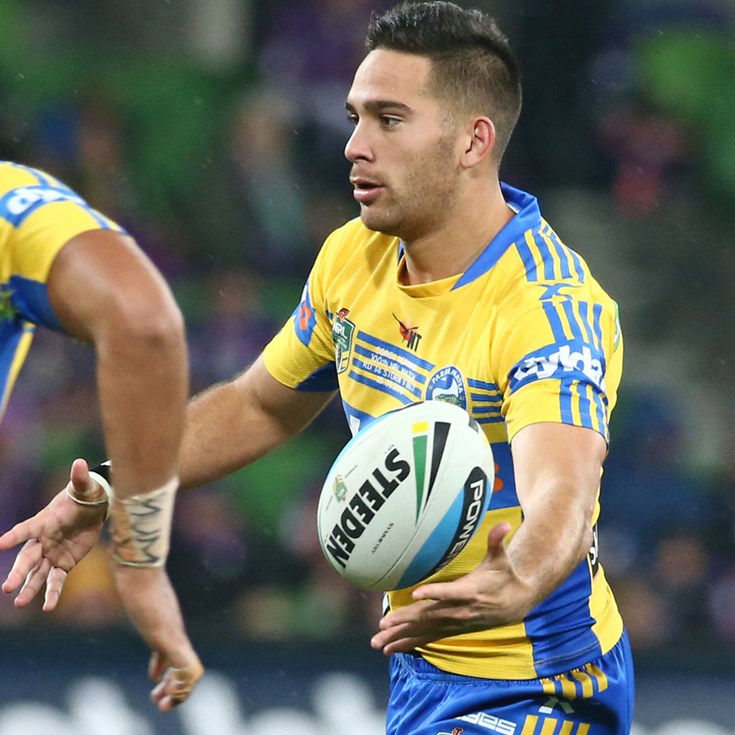