His only piece of brilliance was the first-half offload to Inglis but was nowhere to be seen for the Blues' first two tries and had Josh Dugan blitz past him to ice the game. 6/10

An assist and line break in the first half but was beaten by Josh Morris for the second straight game. 6/10

Back to his powerful best with team-high 130 metres and if not for a Nate Myles fingertip could have been the match winner. 8/10

Was burnt by Jennings' speed numerous times on the right edge, was better in the second half but not a night the veteran will remember fondly. 5/10

The Blues finally put in their homework on him and it paid dividends. With 116 metres he was not poor but certainly took a step back from his first two Origin games. 5/10

Was the Maroons' best at both ends of the field, would have earned man-of-the-match honours had Queensland got the win. 9/10

Had a clever try assist in the second half to wrongfoot the Blues defence but it was the sole highlight. Did little to step out of Cooper Cronk's shadow. 5/10

A fantastic start that included a try but went off after 15 minutes and did not come back on until the 53rd. Went to war with his opposing number Aaron Woods. 7/10 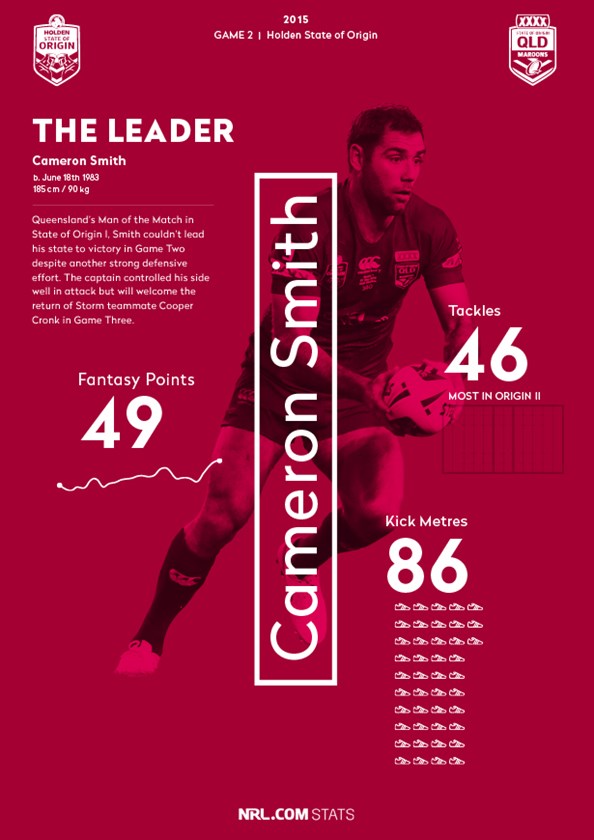 Another great showing by the skipper as he marshaled his troops as always and again led the way with 46 tackles. 8/10

Injured his right ankle after 10 minutes that left him hindered but was strong and forced the penalty that lead to the Maroons taking a second half lead. 7/10

Took the hard hit-ups when they were there to be had, was solid without doing anything spectacular. 6/10

Played just 55 minutes and failed to have an impact on the second half like he did in Game One, had a total of just 37 metres. 5/10

A great performance by the veteran who had 117 metres, 41 tackles and played in Scott for the Maroons first try. 8/10

Got his first run after 55 minutes but was unlucky to knock on the Farah grubber kick that ultimately lead to the Blues sealing the game. 5/10

Very good off the bench after coming on for Scott after 15 minutes. Averaged 9.7 metres per run and had 22 tackles. 7/10

Finally scored his debut Origin try and got stuck in with 30 tackles after coming on for Thaiday with 10 minutes left in the first half. 7/10

Solid off the bench in place of the limping Nate Myles, nothing stellar but stood up as the workhorse when his side needed him. 6/10