An energetic and attacking NSW outfit has racked up their highest Origin score since 2009, squaring the Origin series one-all with a 26-18 win in front of the biggest Origin crowd in history at the MCG.

NSW showed a willingness to spread the ball to both sides and both maligned halves, Mitch Pearce and Trent Hodkinson, played their roles to perfection as the side overcame a typical second-half Queensland resurgence to close out the win in front of a massive crowd of 91,513.

The Blues' left edge and centre Michael Jennings in particular was a constant threat but Maroons left centre Greg Inglis exploded back into form, becoming Origin's greatest ever try scorer along the way.

Like in Game One the Blues starting props, Aaron Woods and James Tamou, produced massive opening spells and closed the game strongly while Canterbury firebrand David Klemmer was immense off the bench, charging furiously into the Maroon wall all night.

The first half was one of the slickest and most free-flowing halves of Origin football in recent memory as the Blues showed a willingness to chance their arm and spread the ball wide.

The main beneficiary was left centre Michael Jennings, who was dangerous throughout, racking up an amazing seven tackle busts in the opening 40 and scoring the first try after showing great evasiveness following a poor defensive misread from Will Chambers.

The referees were far more stringent on the 10 metres, as promised, and each side was pinged four times in the opening 40 – most of those 10-metre penalties – and it helped the Maroons into position to square things up just after the 10-minute mark when a great Corey Parker short ball allowed Cowboys prop Matt Scott to continue his try-scoring ways, crashing under the posts.

Trent Merrin was brought into the action 20 minutes from the start, rather than the finish (as he was in Game One) when skipper Paul Gallen was taken off with a rib complaint, although Gallen did return later in the half.

More brilliant work from Jennings running off Brett Morris allowed Brett's twin Josh to latch onto a pinpoint Mitchell Pearce bomb in the 26th, the centre just managing to retain control and halfback Trent Hodkinson nailing his second tricky conversion of the half to stretch the lead to 12-6.

Queensland refused to go away and another dangerous left side shift with the Blues right side being pulled apart – not for the first time in the half – saw a one-handed over-the-top Slater offload put Greg Inglis into space.

He combined with winger Darius Boyd to scatter the Blues line and backed up to claim the outright record for most ever Origin tries with his 16th four-pointer for Queensland just after the half hour mark.

While Thurston was missing his conversion attempt, busy Blues back-rower Ryan Hoffman – the top metre-getter of the first half with 90 metres – was being taken off for a concussion check. 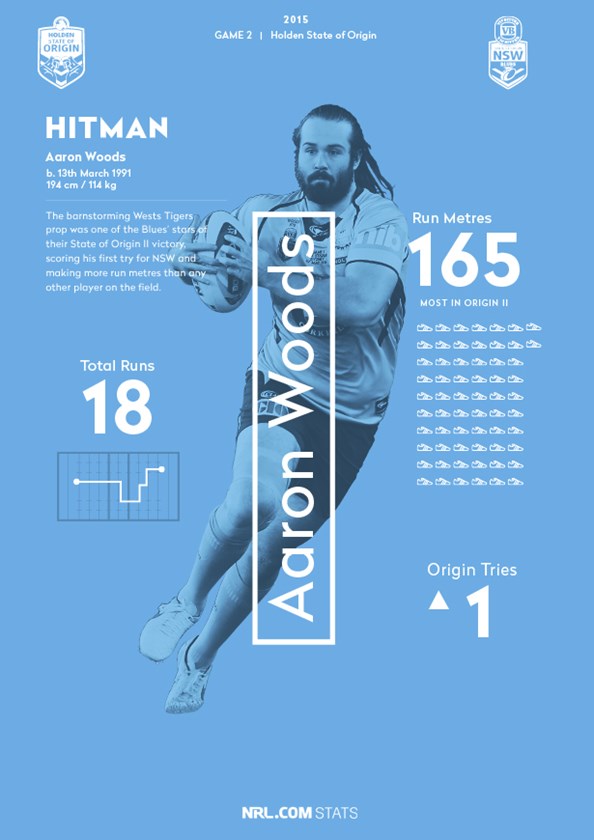 A stripping penalty against Daly Cherry-Evans – also on paper the worst defender of the opening half with three misses – piggy-backed the Blues into position where a 10-metre penalty gave Hodkinson a free shot at making it 14-10 at the half-time break.

In classic Queensland fashion, the Maroons stole the momentum right after half-time when Cameron Smith kicked early in the set from dummy half and a brilliant Thurston chase managed to pin Josh Dugan in-goal for a repeat set.

One repeat set became three as the Blues knocked down a kick then gave a marker penalty and the pressure finally told when bench forward Matt Gillett stepped through some fairly soft defence to claim the lead for the first time in the game.

That lead was extended through a questionable decision to take two points for a 10-metre penalty, making it 18-14, and it looked a poor decision after the Maroons helped NSW into their half with a 10-metre penalty and impressive prop Aaron Woods shrugged off Matt Scott to score next to the posts.

With the Blues suddenly full of running a brilliant long range try looked to have stretched their lead but for a dubious forward-pass call on the final pass to would-be try scorer Pearce. That decision though wasn't as controversial as the one that followed it. When Pearce ran at the line and was stripped one-on-one by Michael Morgan, Inglis scooped up the scraps and raced 90 to score.

Although the play was sent upstairs as a try, the video referees found a knock-on as the ball came free and rather than the Maroons reclaiming the lead the Blues were returned possession back at the Queensland line.

They were good enough to score after first earning a repeat set off a kick when a Hodkinson pass found Dugan charging back in on the angle to score next to the posts and hand the Blues a vital eight-point lead at 26-18.

With Thurston continuing to wear massive shots from the Blues the second push-and-shove fracas of the match erupted with five minutes to go as Farah held the Maroons playmaker down after a kick. The defensive pressure forced Thurston's kick out on the full.

With the match winding down the Blues did their job, completing sets and finding touch, and it was Queensland that began to push passes and come up with errors as the Blues held on to a thrilling win to set up a series decider at Brisbane's Suncorp Stadium in three weeks' time.