Maligned Blues halves Mitch Pearce and Trent Hodkinson have each gone a long way towards silencing their army of critics by combining beautifully to steer their side to a 28-16 series-leveling win at the MCG.

Each praised the other's influence on the game, adding their combination has come along in leaps and bounds since being thrust together for the first time in their careers in Origin I, as well as refusing to give their critics any credit for their performance.

"I think it went up another level tonight," Hodkinson said of the partnership.

"Obviously having that second camp under our belt we went even better. We will keep in contact between Origins like we did last time and obviously rooming together as well, we have that combination working well tonight and it will be better for Game Three.

"We are working well together, we are tight, we have always had that friendship and we will be ready for Game Three."

"I love playing with him," Pearce said.

"He's been getting a lot of criticism. I think he was outstanding [Wednesday night], he's a really calm player, that's why the guys love playing with him.

"All the talk outside, like I've said a few times criticism is sometimes warranted and sometimes it's not but the respect that Hokko has from his teammates is through the roof. Everyone loves playing with him, I love playing with him and I'm really happy for him.

"I thought he was great, he laid on that try, had a calm head the whole time, didn't look stressed at all so he must have a pretty good filter."

Pearce said the pair had combined well from the start.

"He is an easy guy to play with. He knows his game and doesn't go out of his game and what his strengths are.

"I feel like we are building nicely that was a big win and it is all positive at the moment."

He said his move to five-eighth means he can let Hodkinson be the main organiser, allowing himself to run the ball more.

"That is my role and I can pick and choose my time. I have enjoyed it, I enjoy the role I play at the Roosters but I have enjoyed this too," he added.

Hodkinson said he didn't listen to much of what was said about him after Game One, instead praising coach Laurie Daley for showing faith in the pair.

"I was confident going into Game Two, I knew if I got my game right I'd have a solid game," he said.

"He's been outstanding with me, 'Loz' personally, I owe a lot to him. [The win] was a step to repaying him and we've got one to go, it'd be nice to get the win up at Brissy so we'll get back to work and I look forward to that."

He said he knows the critics will still have their say but he'll continue to ignore them, adding the time away in Coffs Harbour and Melbourne had made it easier to ignore them.

"I don't tend to look too much into, I tend to shy away from all those things and at the end of the day I've got to go out there and do my job for the team and that stuff will look after itself," he said.

"I just didn't look into it, there wasn't too much talk in the lead-up to be honest down here.  It was a lot quieter, it was a different feeling not being in Sydney or Brisbane. I think it helped the team as well."

Pearce said he was happy with his own performance and the improvement in the team's attack.

"The stuff we iced was really good and I think there was a lot of legs tackles that could have turned into try opportunities. I thought our attack as a whole was really good, especially to fight our way back in when they went in front. It took about 10 or 15 minutes there to get the arm wrestle back and we did really well. We didn't sort of shrink ourselves, we stayed and kept playing footy which was great," he said.

He said it had been a clear plan to spread the ball more, which paid off with centre Michael Jennings running amok in the first half with a try and seven tackle breaks.

"That was definitely our plan. [First] game, we probably started off like that then second half we kind of went into our shell a little bit. We wanted to play some eyes-up footy. I thought Michael Jennings was outstanding. We've got so much good speed and mobile forwards. We thought there was an opportunity to move the ball and play with some vision and that's what we did," Pearce said. 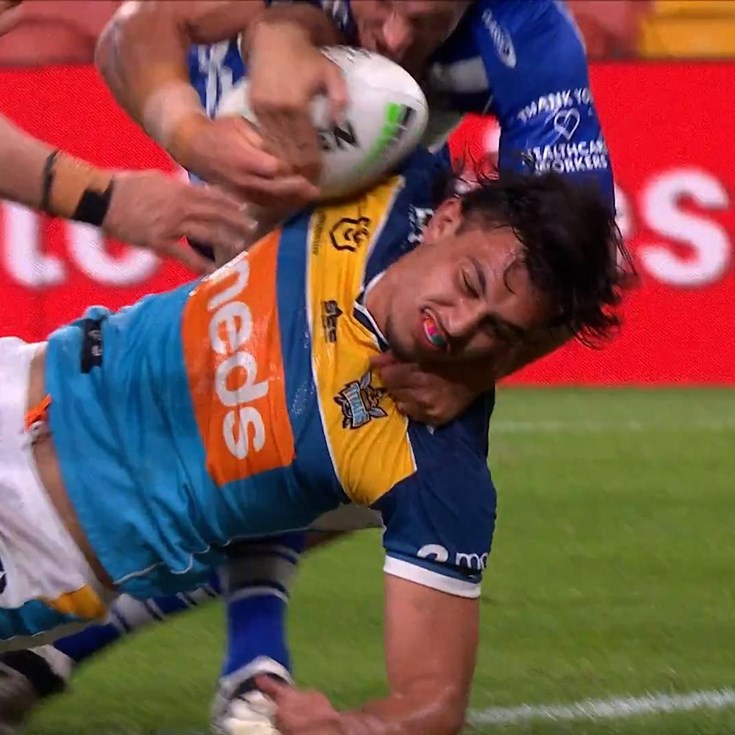 Presented By Chemist Warehouse 32 mins ago