The Manly-Warringah Sea Eagles have earned a gutsy 30-20 victory over a spirited Wests Tigers outfit in wet conditions at Brookvale Oval on Friday night.

It won't be enough to lift Manly off the bottom of the ladder by the end of the round, but the crucial victory goes a long way to distance the northern beaches club from its first ever wooden spoon.

The Sea Eagles halves were the difference in an otherwise closely contested match, both Kieran Foran and Daly Cherry-Evans showing their individual brilliance to create points out of nothing.

A late Tigers comeback threatened the home side, however Tim Simona was controversially denied a late attempt by the video referees to crush any chance of a thrilling finish.

Both teams traded four-pointers early on, Brett Stewart the first across the stripe. He sniffed out a four-pointer in just the third minute of the match. Kieran Foran threw the final pass after tracking across-field to provide the 'Prince of Brookvale' with the slightest amount of space.

The Tigers would strike back soon after as Kevin Naqaima intercepted a rushed Foran pass. Despite the Tigers flyer getting mowed down by Cherry-Evans, Kyle Lovett was good enough to set Mitchell Moses up in the corner off the ensuing play.

In the 26th minute a piece of Tedesco magic put the Tigers ahead. Without looking wide or even gaining control of the ball, the Tigers fullback batted the pill on perfectly into the arms of an unmarked Pat Richards out on the wing.

In an entertaining first 40, both teams made big effort plays. The Tigers put in a great kick–chase and barreled Stewart into his own in-goal in the 28th minute before a huge play from Willie Mason as he rushed out of the line to force the ball loose from Brenden Santi.

That play led directly to another Manly four-pointer in the 34th minute. A perfect cross-field kick from Foran found space between fullback and winger, landing where only Steve Matai could get to it. Coming from outside in, the Manly centre claimed the ball in front of Naqaima to level the game up.

The Sea Eagles would not stop there though as they closed out the first half in brilliant fashion, scoring with just seconds to play. Feleti Mateo once again showed his brilliant skill to set up Foran through the middle of the pitch with a perfectly timed inside pass. The Manly five-eighth did well to bounce off his left foot to beat Tedesco in the second line of defence, making it 18-10 at half-time.

Not to be outdone by his halves partner in his first home game since committing to the club long-term, Cherry-Evans showed the class that had him in such high demand early in the second half. He was controversially denied a try in the 43rd minute but made amends soon after as he brilliantly set up Stewart with another perfect in-field kick off the back of a nice break.

Naqaima showed off his amazing athletic ability to bring the Tigers back into the game in the 49th minute. After a perfect Moses cut-out hit him square in the chest, the Tigers winger amazingly grounded the ball in the corner halfway through a somersault.

However a crucial Tedesco mistake in the 63rd minute would halt the Tigers' momentum. In attempting to field a deep kick, the Tigers fullback knocked the ball over the sideline. Just a couple of sets later Manly extended their advantage out to 30-14. DCE was once again instrumental, skipping outside before sending Tom Symonds through a gap, the skillful second-rower then did brilliantly to wait for Ligi Sao charging through on the inside.

In the 73rd minute the Tigers scored an entertaining and controversial try to give themselves a chance at victory. Moses was central, somehow ending up with the ball in the in-goal after a failed chip and chase. They would go back in again just three minutes later through Simona, but would be denied, crushing any chance of a late comeback.

Both Dunamis Lui and Chris Lawrence were placed on report for possible crusher tackles. 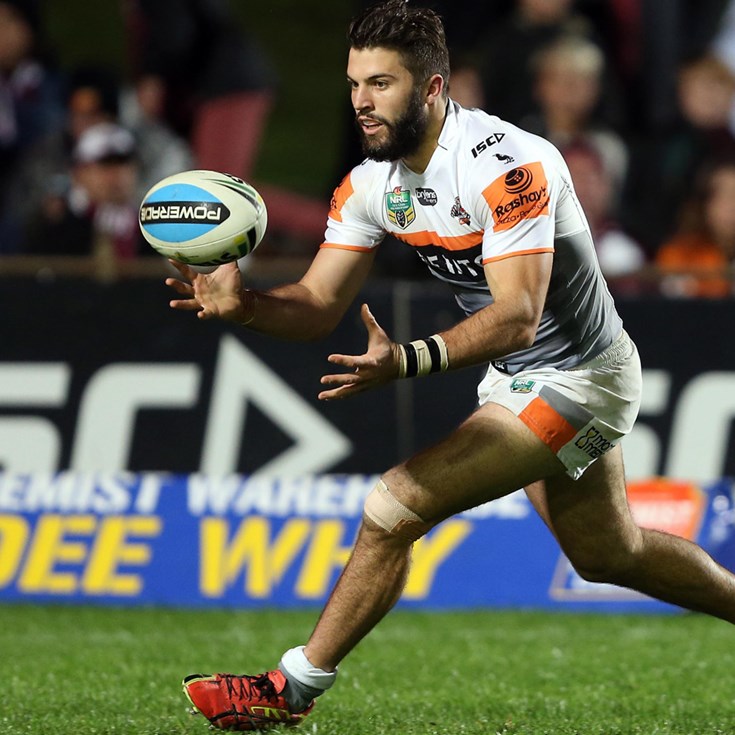