The Warriors were perfection personified to start the second half as they came back from a four-point deficit at half-time to record a convincing 36-14 win over the Titans at Cbus Super Stadium on Saturday night.

On the back of a 100 per cent completion rate from their first 13 sets of the second stanza, halfback Shaun Johnson orchestrated a three-try blitzkrieg in a 12-minute period before adding the final nail in the coffin two minutes from full-time to crush an injury-decimated Titans outfit.

Scoring two tries himself in the 57th and 78th minutes and adding an unblemished six goals from as many attempts, Johnson finished the game with 20 points and took his career points tally beyond 500, helping to lift his team into the top eight in front of a crowd of 14,132.

The Titans returned for the second half with a 10-6 advantage but after owning the first three sets were subsequently shut out of the game by a Warriors team that showed remarkable patience and persistence to play mistake-free football that strangled the life out of the home side.

The Warriors took the lead for the first time in the game courtesy of Johnson's conversion of Raymond Faitala-Mariner's first NRL try and followed it up shortly thereafter with Johnson's first of the night. A perfectly placed Johnson grubber kick into the in-goal laid on the next try for Konrad Hurrell in the 63rd minute that gave the visitors a 24-10 advantage.

Having lost both Ryan James and Aidan Sezer to injury, the Titans threatened to stage a comeback when James Roberts sliced across for his 14th try of the season 10 minutes from full-time but quick tries to Bodene Thompson and Johnson delivered a 22-point victory for the Warriors.

The return of Sam Tomkins to the line-up at fullback was a significant pre-game boost for the Warriors and with a completion rate of 90 per cent for the second half and with 54 per cent of possession proved what can come when this team plays with patience and discipline.

From the opening set of the game the Warriors set up camp within the Titans' half and remained there for most of the first eight minutes but it was the Titans who were first to score.

On the back of some spirited goal-line defence that repelled the Warriors for three straight sets at one point, the Titans were sparked into action by the team's leading try-scorer 'Jimmy the Jet', aka James Roberts.

Taking the ball on the right side of the field just inside Warriors territory, Roberts made a bee-line for the left side where he linked with back-rower Matt Robinson.

Robinson offloaded awkwardly to club debutant Nene Macdonald who with just his second touch as a Titan burst into the back-field before finding Josh Hoffman in support to score his fourth try of the year in the 11th minute.

Three minutes later Aidan Sezer forced a Warriors line drop-out with a well-weighted grubber kick and in the ensuing set a nice tip-on play from Luke Douglas close to the line saw Lachlan Burr crash over under the posts.

Having left the field for a concussion test after copping a knock in the opening set of the game, former Titan Nathan Friend returned to the field for the Warriors and immediately had a positive influence on his team, diving between a yawning gap left by Eddy Pettybourne and Robinson to score to the right side of the posts in the 20th minute to reduce the deficit to four points.

He appeared to have given his side a chance to take the lead when he put Charlie Gubb across under the posts four minutes from half-time, but the on-field decision of 'try' was overturned by the video referees after he lost control of the ball coming up just inches short of the line.

The Titans threatened to add to their tally in the dying stages of the half but the Warriors defence held firm on their own try-line. 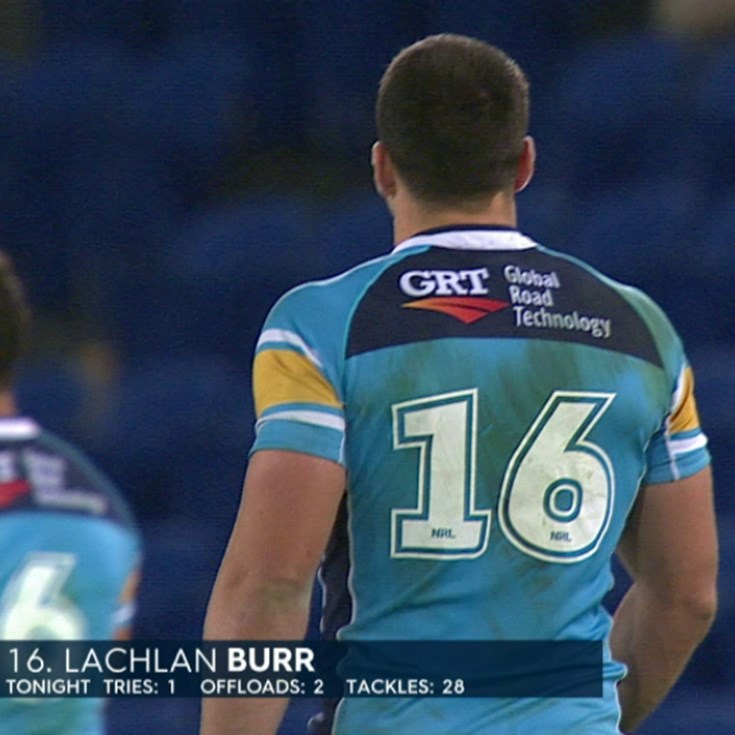