A defensive performance for the ages has seen Brisbane snap an eight game losing streak against the Storm to record a 14-12 win at AAMI Park.

A high quality contest forced the Broncos to defend a staggering 11 goal line drop-outs in order to leave Melbourne as winners for just the second time since 2003.

Wayne Bennett's men made every one of their 383 tackles count, none more so than when Matt Parcell leveled Felise Kaufusi in the final minute to wrap up a famous win.

The Broncos made a mere 42% of possession count by exploiting the Storm's suspect edge defence for all three of their tries.

The narrow defeat was further heartbreak for a brave Melbourne who slumped to their sixth loss of the season and fifth by less than five points.

Andrew McCullough channeled his inner Superman to put in a game-high 68 tackles, while Matt Gillett made 55 tackles in what was a man of the match performance just five days after playing a grueling Origin II.

Despite several Origin stars missing for both sides it was a breathtaking first half that more than lived up to the game's top-four billing.

Melbourne's Blake Green opened the scoring with a solo run from dummy half and Cameron Smith, backing up five days after Origin, converted for a 6-0 lead after nine minutes.

Even without the wonder-boot of Cooper Cronk the Storm managed to pile pressure onto the ladder leaders with four goal-line drop-outs inside the opening 14 minutes.

The Broncos were forced to make 110 tackles during that time before back-to-back penalties by the hosts relieved the pressure.

That was all the respite the visitors needed and on 19 minutes they bounced back as sheer weight of numbers saw Lachlan Maranta score down the right edge.

This was an opening 40 minutes of end-to-end action as the Storm marched straight back up-field to force another two goal line drop-outs but again the visitors held firm and on the half hour mark they were rewarded with the lead.

Seven minutes after being placed on report for a crusher tackle on Cameron Munster, in-form Jack Reed bounced back to score down the right side in a crazy fifth tackle try that went through 11 sets of hands and is sure to find its place in the end-of-season highlight reel.

Brisbane held a mere 37% of possession after 30 minutes yet found themselves ahead 8-6 as Sam Thaiday and Josh McGuire headed to the bench for a reprieve.

That left what had been a stone-wall defence significantly weakened and the Storm skipper didn’t have to be asked twice before exploiting it, finding Green with a clinical pass from dummy half for his second try of the game and a 12-8 halftime lead.

If there was one criticism of the Storm defence in the first half it was their edge defence after 10 minutes after the restart it saw them concede for the third time in this game.

Anthony Milford put in a brilliant kick into the path of Corey Oates who did not need to break stride and Jordan Kahu converted from the touchline to nudge the Broncos into a 14-12 lead.

Kurt Mann had a golden opportunity to restore a Storm lead on 58 minutes but failed to ground the ball as the Broncos repelled a repeat set once again.

Melbourne continued to pile the pressure on with the final 20 minutes played almost entirely up the Broncos end of the field.

But this was an afternoon where Brisbane staked their claim for the minor premiership with a defensive performance their fans will remember for some time to come.

"If you go have a look at that dressing room now a few of the boys struggled to sing the song," Broncos stand-in skipper Sam Thaiday said.

"That is when you know guys are really spent and really left everything out there on the field." 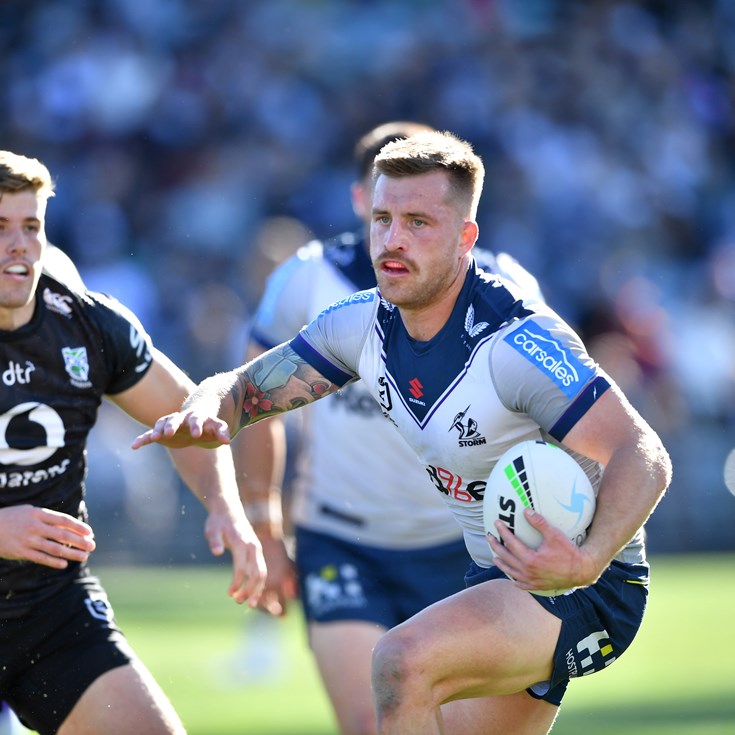