In a lively and often spiteful affair, the Bulldogs got their season back on track and re-entered the top eight with a 24-12 win over a depleted Penrith side. Here are five talking points from their Round 15 Telstra Premiership clash.

Josh Reynolds' push on Jamie Soward saw him sent to the sin bin for 10 minutes for a professional foul, but despite the pleas of skipper Peter Wallace the officials were unmoved when it came to deeming the play a penalty try.

When Bryce Cartwright's inch-perfect grubber following an Elijah Taylor line break sat up in the in-goal in the 19th minute, a chasing Soward seemed likely to score until the tiniest of touches from Reynolds put him off balance.

With Bulldogs big man Aiden Tolman virtually shoulder to shoulder with Soward in the chase, the referees rightly decided they couldn't be certain Soward was guaranteed to score but opted to send Reynolds to cool his heels for 10 minutes.

Unsurprisingly the Penrith camp thought a penalty try would have been fair and the man at the centre of it thought the sin bin was too harsh, although Bulldogs coach Des Hasler thought the referees got it right.

"I thought a penalty try would have been fair," Penrith captain Peter Wallace said.

"I probably thought he interfered with him, whether it was accidental or just competing," he said.

After the game Reynolds was of the view it was a little harsh.

"Yeah I was very frustrated at that, it's disappointing because they're obviously going to go with the attacker in that sense because that's how it goes. I thought maybe just a penalty," Reynolds said.

Hooker James Segeyaro was assisted from the field in the 60th minute with a suspected medial ligament strain which, according to early reports, may keep him out for between one and three weeks. It is another blow for a struggling Penrith side still without gun fullback Matt Moylan (ankle) and having hardly had their first-choice 1-6-7-9 together at any stage this year. The fact their reserve hooker is 2014 Grand Final winner Api Koroisau is at least some comfort.

"It looks like he's done his medial in his knee so not great news there, hopefully it's not too bad," a downcast Penrith coach Ivan Cleary said after the game.

Asked if any of his injured troops are expected back soon, he did offer a glimmer of hope with a Kangaroos winger expected back on the field next week.

"Josh Mansour will be back next week. There's one," he offered.

"I don't know, someone's walked under a ladder or smashed a mirror or something," he said.

"We're just going to have to punch on and see what happens. He's going to be monitored over the next couple of days.

"Obviously it's tough when someone does their knee. Hopefully it's not too bad – he'll miss a couple of weeks and then be back. We've got a fantastic replacement in Api but obviously 'Chicko' being first-choice, it's not ideal."

Bulldogs wingers can save tries...

Given the final 12-point margin and the fact Penrith came agonisingly close to scoring a few times, Thompson's twin try-saves proved critical in the final wash-up.

In the 57th minute a Wallace cut-out ball looked to have sent Blake over in the left corner but Thompson's desperate last-ditch effort meant Blake's arm hit the touchline before he could ground the ball.

Then in the 70th minute a huge floating Harbour Bridge cut-out from Soward allowed Blake to isolate Thompson but the Dogs flanker didn't let the acres of open space infield distract him, kept his eyes on his man and made a great legs tackle to slide Blake into touch and save another four-pointer.

"It just shows how it's a game of inches," Reynolds said of his winger after the game.

"I'm sure Corey when he did it he wasn't too sure but Corey's a great player, he always puts his heart into everything he does and he comes up against some big opponents.

"He's only a small dude but he definitely does the job on a lot of them and it was great to see him stop those two tries tonight. It will do a world of good for his confidence."

Curtis Rona just can't stop scoring tries. Even though he wasn't the night's first try-scorer (that honour went to fullback Sam Perrett on this occasion) Rona still added yet another to his tally, which now reads 16 in 14 games.

It keeps him two ahead of Titans flyer James Roberts on the season leaderboard and continues his prolific year.

Of the 16 though, this was arguably the most spectacular. One of those ridiculous tries wingers just seem to be able to come up with now when needed, Rona got a good cut-out from Perrett and despite serious attention from opposing winger Dave Simmons he swivelled his body in the air and – with everything but the ball-carrying hand suspended outside the field of play – planted the ball millimetres inside the touch-in-goal line.

As much as Penrith seem to be missing fullback Matt Moylan, first-choice halves Peter Wallace and Jamie Soward would be disappointed with how the side's attack unravelled on the last play far too often on Saturday night.

The Panthers are also continuing to push passes and offloads in a desperate search for points rather than getting right into the grind and playing the patience game.

"We didn't take our chances, they did," was coach Cleary's blunt assessment after the game.

"We're in a team at the moment that can't quite make it happen, we're then looking for other ways to get it done which is leading to too many errors, part of that is the disjointed nature of our season," he said.

The Panthers completed 67.5 per cent as against 81.6 per cent for their opponents, and doubled Canterbury's offloads, which is symptomatic of how they're playing at the moment. 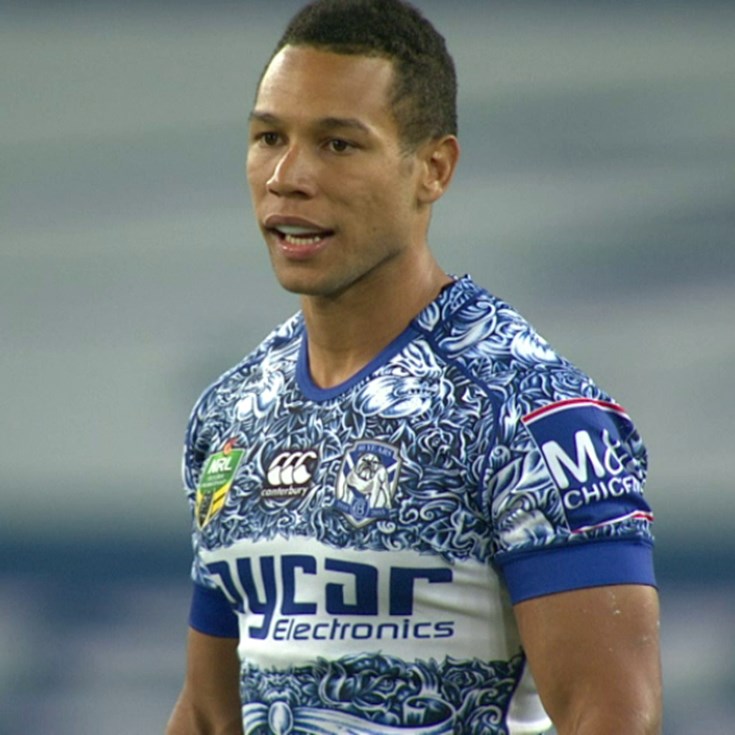