There can be no greater praise for a club debutant than to have your teammates describe you as 'Greg Inglis-like', but that's the impact Nene Macdonald has had in his first week at the Titans.

The arrival of Macdonald and former Newcastle hooker Chad Redman last week could not have come at a more opportune time for the Titans who currently have close to a dozen of their top squad out injured.

Draw Widget - Round 16 - Roosters vs Titans

Macdonald made his Gold Coast debut just days after arriving at the Titans as replacement for the injured Brad Tighe and showed in his first two touches that the left centre position may become his own for many years to come.

After a strong charge from deep within Titans territory with his first touch in the second minute against the Warriors on Saturday, the 21-year-old Papua New Guinea international laid on a try for Josh Hoffman with his second involvement.

He showed great power and speed to bust through down the left-hand side before passing inside to Hoffman to score, finishing the game with more than 100 running metres, three tackle busts and three offloads.

As he prepares to face his former Roosters teammates less than two weeks after training alongside them, Macdonald's teammates are glad that he is now on their side.

"He's got that Inglis-factor," said Titans front-rower Mark Ioane. "He plays a bit similar to him and once he gets his confidence up with us teammates and his position and his role in the team he should do well.

"We talked a little bit after the game, especially with a few of our teammates encouraging him to do his best out there and I thought he did that. He seems very positive and he's looking forward to playing against his old teammates this week."

In just his 12th NRL game and first starting in the centres, Macdonald also caught the eye of Eddy Pettybourne who conceded that he knew little of the Cairns product prior to his arrival at the Titans last Wednesday.

"They did really well. We'd watched videos of them before and Nene played awesome and Chad came in and did his job as well," Pettybourne said of his new teammates.

"[Nene] surprised me because I haven't really watched him play but he was pretty quick for a big fella and he had some good feet as well.

"He's only going to get better from there so we've just got to keep training and getting those combinations right with him."

Macdonald had previously spent time in the Titans' under-20s system before being lured to Bondi where he went on to make his NRL debut as a 20-year-old in Round 11, 2014.

With a tricky travel assignment to Gosford on Sunday, Titans players will have a greater chance to get to know the new boys and attempt to build on their 4-2 record on the road so far this season.

Although he was unable to pinpoint why their away record was better than that at home, Ioane said the chance for the injury-ravaged squad to spend a few days together would be of great benefit against the competition favourites.

"When we're away we get more bonding time with each other so we've just got to make sure we're up for it," Ioane said.

"I thought they went real well on the weekend considering it was their first game and late inclusions into the team. They bonded real well with us and hopefully they can build from that." 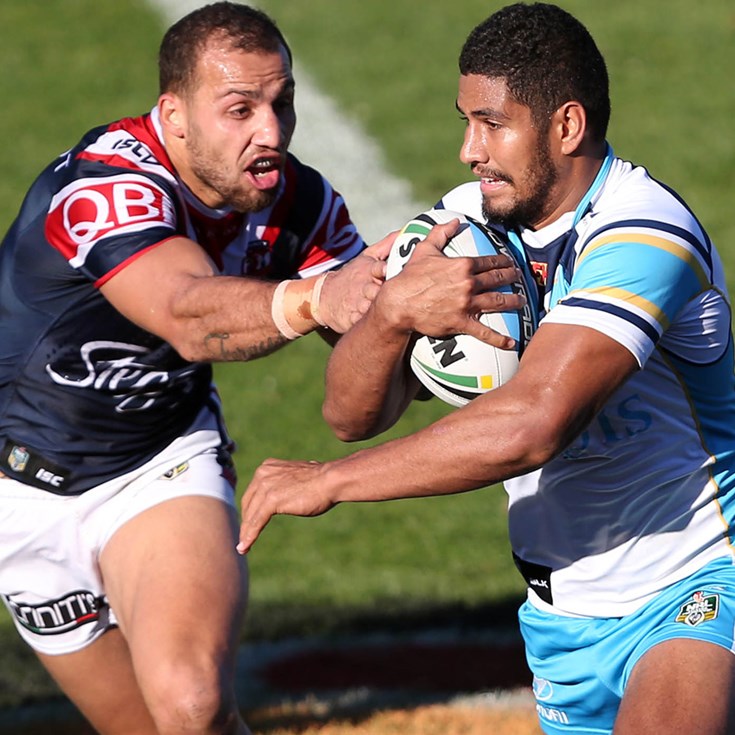 Opinion: Time for Dave Taylor to step up

Redman swots up for family's future