The fans have spoken: 60 State of Origin legends have been knocked out of contention and only four remain in the running to be named the greatest Origin player of the century so far.

Of all players to have worn the blue of NSW or the maroon of Queensland since 2000, four playmakers remain – including just a single current player.

Who will get your vote as each state's best player of the past 15 years?

The final eight: How the fans voted last time around
How they got here: View the full Origin Knockout playoff bracket

How does a Queensland fan pick between these two all-time greats? Thurston may be the best player in the world right now, while Lockyer was probably the most successful player of his generation. A Brisbane, Queensland and Australian Test captain who boasts a record 36 State of Origin appearances, Lockyer started his Maroons career as a goal-kicking fullback (finishing as leading point-scorer in his first Origin series) and finished it as a five-eighth and captain of a side that had won six straight series. Thurston meanwhile is the best half in the game today, with the most competitive spirit in rugby league and the talent to match. But has he been Queensland's best of the century so far?

Andrew Johns has dominated all opponents in this poll so far – earning more than 90 per cent of votes against former Knights teammate Adam MacDougall, 86 per cent of the vote against Roosters star Craig Fitzgibbon, and 85 per cent of the vote against another long-time teammate and the most capped NSW captain ever, Danny Buderus. But has he met his match here? Brad Fittler represented the Blues at Origin level 31 times – more than any other player, and eight more than Johns. He captained NSW 14 times – eight more than Johns.  After just scraping through last week's match-up with Jarryd Hayne, Fittler could well claim to be the best of the modern Blues. On the other hand, Johns won more Man of the Match awards at Origin level and is in the record books as a rugby league Immortal. Who gets your vote? 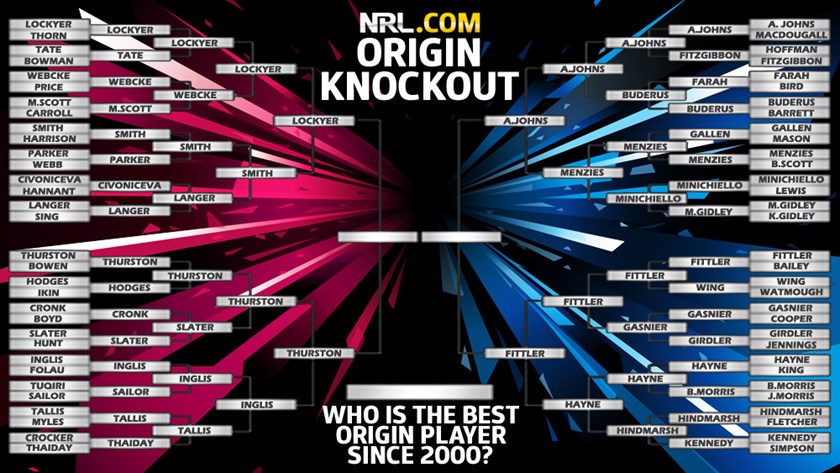