After almost 330,000 votes from footy fans, Darren Lockyer has been named the best State of Origin player of the 21st century so far as the last man standing in NRL.com's Origin Knockout – with 64 Origin greats whittled down to just one.

At the end of six rounds of voting, Lockyer edged out NSW's best Andrew Johns to win the tournament – and his old teammate Kevin Walters backed the fans' choice.

"He's at the top of the tree. There's the Meningas, and the Lewis's and the Langers, that's where he sits, looking down on everyone. There's no one above him," Walters, now a Queensland assistant coach, said of the former Maroons skipper.

Walters said Lockyer's State of Origin career went to a new level during the 2006 campaign, when he scored the match-winning try and was named Man of the Series as captain.

"I think there were those who doubted him early in his career at Origin level and I thought that 2006 series really defined him as a leader and as a player for Queensland," Walters said.

"After that his career really kicked on. After they won the Origin series the Broncos went on to win the premiership and he kicked on in his football career.

"It was a big turning point for him, that State of Origin series. I thought he really grew as a leader. Everyone knew that he could play but he showed tremendous leadership through that which helped him throughout his career."

More than 18,200 votes were entered by fans on NRL.com for the Lockyer v Johns match-up, with about 330,000 votes entered in total across the 63 match-ups in the Origin Knockout tournament, which asked fans to vote for their favourite Origin players since the year 2000. 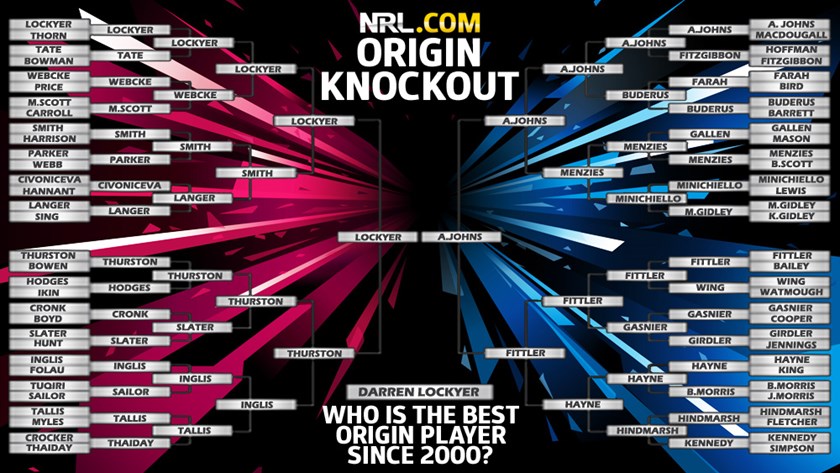