After slumping to four consecutive losses for just the second time since 2002, the Storm say their effort right now is undoubted but misdirected.

Draw Widget - Round 18 - Warriors vs Storm

After a slow start on Sunday afternoon, which saw the Warriors pile on 16 unanswered points in the first half, Craig Bellamy's men rallied in the second period to get back to within eight points or less on two occasions.

Despite enjoying more possession and a better completion rate than their opponents in the 28-14 loss, the Storm attack continued to struggle without the presence of injured fullback Billy Slater, while their defensive lapses were punished by some brilliant Warriors attack.

"I thought there was plenty of effort there again, but some of the effort seems to be a little bit misguided at the moment," Bellamy said following the match.

"There were a few things to read into it, our start wasn’t great again, we were 10-0 down [in the blink of an eye], so our starts are a bit of a trend over the last couple of weeks.

"They [the Warriors] were just too good on the night and that start held them in good stead; it was the second half before we really started getting into gear.

"We are really struggling with our attack, we are trying a few different things each week but it doesn't seem to be working so well for us."

Just as they had against Canberra in Round 16, the Warriors enjoyed plenty of success through attacking with their right side, proving too much for Hymel Hunt and Marika Koroibete, who leaked four tries down their corridor and missed a combined six tackles.

The visitors also had little answer for the individual brilliance of Shaun Johnson, who ran for 213 metres off 15 runs, breaking the line twice and setting up a try, before scoring one of his own to kill the match off in the 64th minute.

Storm captain Cameron Smith said Johnson's effort alone had been worth the price of admission for the 17,278 fans who flocked to Mt Smart Stadium on a chilly Auckland afternoon.

"They got their money's worth tonight off his performance, particularly late in the game, he looked like he was playing touch football in the end with a couple of his flick passes," the Queensland and Kangaroos captain said.

"He is a world class player, he has shown it at the international level and when his forwards do a really good job like they did tonight, and give him some momentum, he can do those things he is really good at.

"I know he had a fairly starring role for their team, but there weren't too many bad players in their side."

The victory leaves the Warriors sitting fourth at the end of Round 18, while Melbourne have a short turnaround ahead of hosting the Panthers on Friday night in what will be Smith's 300th Telstra Premiership game. 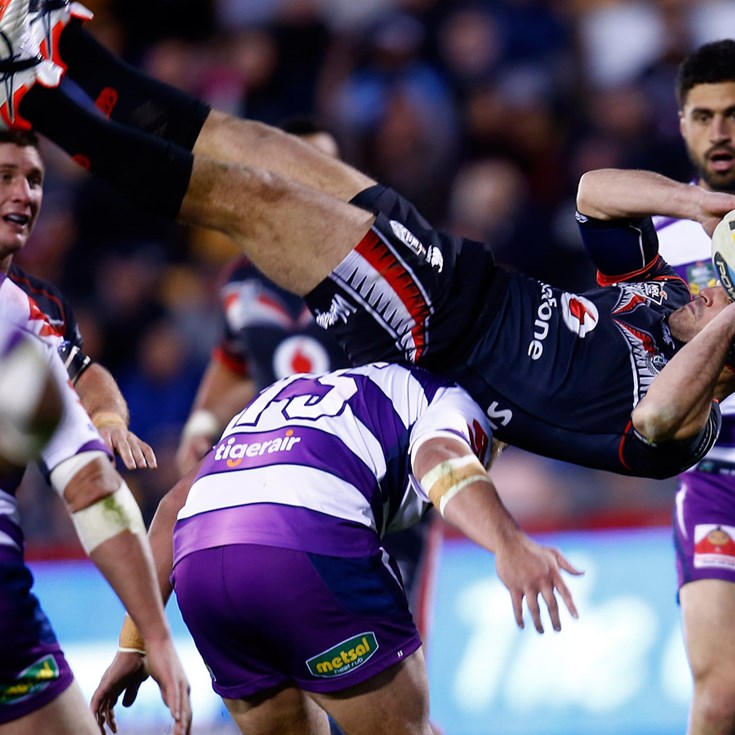