Precariously placed in the top eight, a win for both the Bulldogs and the Sharks here is essential.

With the Bulldogs sitting at seventh on the Telstra Premiership ladder, and the Sharks just below them at eighth, this game could prove to be the game of the round with their finals hopes still very much in the air.

Intriguingly both teams are on 22 competition points, alongside the Warriors and Melbourne. In the case of an unlikely Knights win over South Sydney, any one of these teams could finish the round in the top four – pending on points differential.

Working in the Bulldogs favour is their return to Belmore Sportsground for the second time in three games. Considering how well it worked back in the final game of Round 16, Des Hasler's men will surely be keen to utilise the same emotion again.

In team changes, both welcome back utilities – Bulldog Moses Mbye and Shark Ben Barba – on their bench. Mbye's return sees Tim Browne drop back to 18th man while Barba comes on to a six-man bench also including Matt Prior and Anthony Tupou – in what could be his first game back since severely breaking his jaw in Round 9.

Draw Widget - Round 20 - Bulldogs vs Sharks

Watch out Bulldogs: In his first game against his old club since leaving last year, former Bulldogs captain and Sharks hooker Michael Ennis will be trying to make sure he spoils the party. His six try assists in three games spells danger for the Bulldogs as the Sharks defence has naturally started to revolve around the veteran rake.

Watch out Sharks: Belmore is sacred to the Bulldogs, and it's a home ground advantage they don't take lightly. The success of the Bulldogs' Round 16 clash there against the Storm will be sure to play on the Sharks' minds. Beginning with a bang against Melbourne, where they scored three tries in the first 13 minutes, the Sharks will need to take their defensive game up a peg or two.

Key Match-Up: Josh Jackson v Wade Graham – After playing arguably his best game of the season in his Man of the Match performance against Parramatta last weekend, Josh Jackson should be hungry for more. Coming up against one of the most formidable forward packs, including Wade Graham, Jackson will need to find some much-needed consistency in his game. Graham will prove a worthy challenger. Averaging 149 metres and 28.4 tackles per game this season, Graham continues to prove that life after Paul Gallen won't be bad.

The History: Played 86; Bulldogs 54, Sharks 30, Drawn 2. These two clubs haven't played at Belmore since Round 2 of the 1997 Super League season, before that it was in Round 2, 1994. On both occasions field goals from former Sharks half Mitch Healey proved the difference. In more recent times, the Bulldogs have won eight of their past nine games against Cronulla including a 42-4 thrashing in Round 2 last year.

What are the Odds: Sportsbet punters have identified the Sharks as over the odds and they’ve almost been as popular dollar-wise as hot favourites, the Bulldogs, in the head to head market. The Sharks have been backed at the line where they’re receiving the points start. Latest odds at Sportsbet.com.au

The Way We See It: With history, the home crowd and the sentiment on their side it's hard to go past the Bulldogs. With another sell out crowd expected, the Belmore faithful will be sure to cheer their team home over former captain Ennis and the Sharks. With a top four berth still possible, the Bulldogs should keep themselves grounded to nut out their second-straight win – Bulldogs by four points. 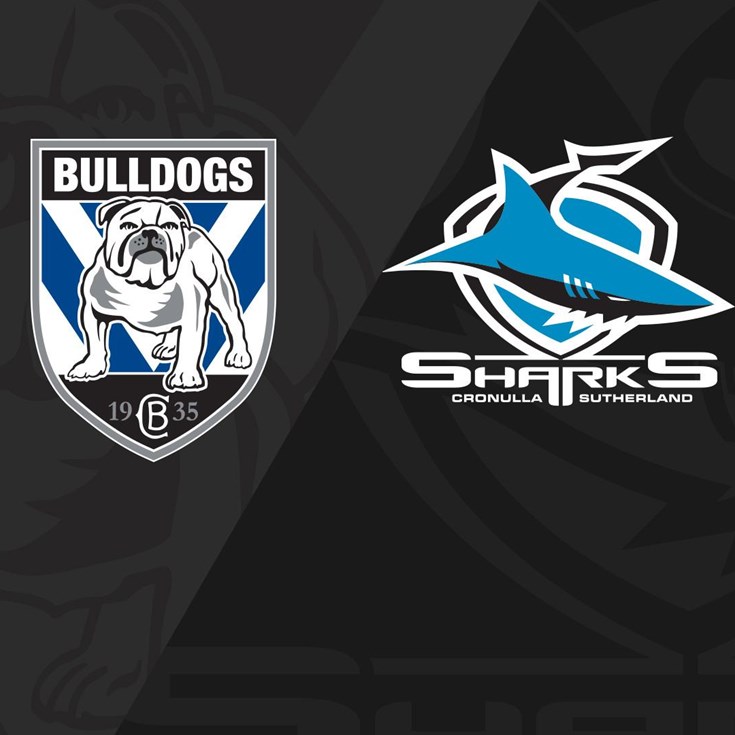