Wests Tigers players Martin Taupau and Tim Simona say the squad is keeping their heads up despite a tough season but know they face a massive ask to get their season back on track against the in-form Roosters.

Taupau – one of the best performers in the team's young forward pack this year – will be tasked with facing up to the likes of fellow New Zealand internationals Sam Moa and Jared Waerea-Hargreaves, the former being one of his 2014 Four Nations teammates.

He said it was no surprise the Roosters were hitting form at the business end of the season.

"They've got a top class team, they're one of the benchmarks in the NRL," Taupau said.

"We have to stay strong. We've worked on a lot of things in the last few sessions, so we'll be ready for it.

"They've got some world class players on their team, we're aware of that. But for us, we have to focus on ourselves more than anything, to get the positives and overall, win."

He said Moa ad Waerea-Hargreaves are the leaders of their forward pack and will require the Tigers forwards to work together as a unit to try and match them in the middle.

"We're not worried [about] any individual... We just have to stick together as a forward pack and lay the foundation for the rest of the team to play on the back of that."

Taupau conceded motivation can become an issue in a side that is struggling and out of finals contention.

"It's hard to find any motivation to get yourself going as a team [with the finals out of reach] but for us, we don't look at where we're standing on the ladder. We're taking a few things out of the last few games," he said.

For example in the 42-16 loss at Brisbane last week the side hit back from a four-tries-to-nil first half to score the first three tries of the second, before fading again in the final 10 minutes of the game.

"We got the ball rolling and we got a few things out of it. We scored a few tries. Those are the things we take out of it. We'll work off the back of what we've done," Taupau said.

"You've just got to come back to training with a positive attitude. The last few sessions have been good for us. We're just working on the back of that, even though we've had a few bad losses in the last few weeks.

"There's always going to be doubt creeping up in the back of everyone's mind. But you have to stick to the process and believe in the structures that have been put in place. It all comes down to yourself as well – overall, we're OK. We're just sticking together and moving along."

Centre Tim Simona admitted this Friday's game will be a "huge task" against one of the heavyweight sides of the competition but said while the side was disappointed with its four straight losses players were still upbeat at training.

"It was pretty disappointing to lose on the weekend [against Brisbane] but we want to turn that around and hopefully we can, there's no better team to turn it around against like a big team like the Roosters," he said.

The Tigers have an awful record against the Roosters with just one win from their past 11. Simona's five-year first grade career includes just one game against the Tricolours, for one loss.

"I don't think I've ever played a game where we've beaten the Roosters, from what I can remember," he said.

"They're a hard team to beat, and we want to turn that around this weekend." 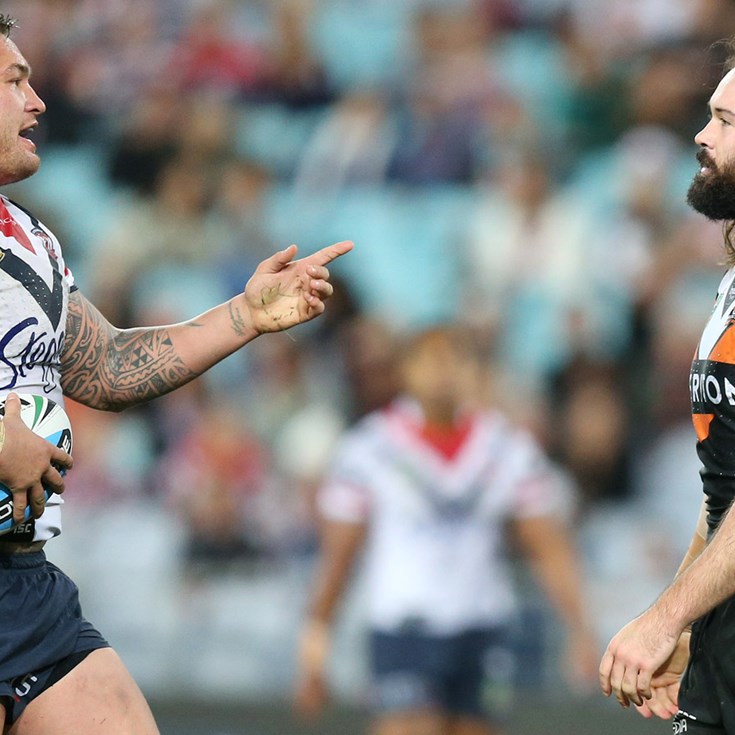