On a perfect Sunday afternoon in Sydney's west, the two teams went try for try throughout the whole encounter, with the Raiders just edging out their opponents thanks to some Edrick Lee brilliance with just five minutes remaining.

With the Panthers enjoying repeat sets on the Raiders line, and behind by just four points, Lee raced out of his wing position to charge down a Peter Wallace kick before racing 90 metres to seal victory for the visitors.

It was a thrilling end to a scintillating and high-scoring 80 minutes of football.

For Canberra, man of the match Josh Hodgson and Paul Vaughan were standouts, particularly in attack.

Meanwhile James Segeyaro was awesome for the injury-hit Panthers, constantly threatening the Canberra line and also scoring a try.

The first half was hugely entertaining, finishing 18-18 at the break after six tries.

Elijah Taylor had first points for the Panthers in the sixth minute taking advantage of a disjointed Raiders defensive line following a loose offload.

But Will Smith's mistake in the play the ball on his own 10 metre line just moments later brought the Raiders back into it.

They took full advantage off the ensuing set after a smart decision by Hodgson out of dummy half on last tackle. The Raiders rake swiftly threw the ball short-side to exploit an overlap through Joey Leilua before Jordan Rapana went over down the right sideline. Jarrod Croker's sideline conversion made it 6-all.

The Panthers reclaimed the lead as Isaah Yeo raced away following a high kick from Jamie Soward. The video referee cleared a potential knock-on in the Panthers' attempt to reclaim the kick.

Once again the Raiders leveled soon after as Vaughan channeled his inner hulk following another Panthers mistake coming off their own line. From close range the big Raiders prop carried a number of Panthers towards the line before reaching out and grounding the ball at full extension.

Draw Widget - Round 20 - Panthers vs Raiders

The match was reaching fever pitch as Segeyaro put the Panthers in front once again, his second amazing run of the set of six in the 25th minute ending with him diving over.

Off his first run, the crafty hooker split through the Raiders behind the ruck before perfectly offloading to Soward. Segeyaro got up and finished the movement off on the next play, showing his acceleration to break through the retreating Raiders line.

But the Green Machine would hit back again. A dazzling 60 metre movement seeing Blake Austin breaking through at the halfway line before linking up with Croker and the ever-supporting Shaun Fensom finishing the move. Croker's conversion made it 18-all with 10 minutes still remaining in the half.

The beginning of the second half was completely at odds with the first as both sides struggled to find their attacking spark.

After a sloppy first 15 minutes the Raiders were the first to register on the scoreboard as their two best players on the day, Hodgson and Vaughan, linked up on the try-line. Hodgson's double pump out of dummy half perfectly set the big Raiders prop up to barge over for his second.

The Panthers wouldn't be outdone though as they crossed out wide following a smart backline move off an attacking scrum. Robert Jennings beat Lee to the corner before Soward nailed a sideline conversion to bring the game to 24-all with 16 minutes remaining.

Rapana was over moments later thanks to some sharp dummy half work from Leilua, giving the Raiders a four-point advantage with the clock winding down.

It looked like the Panthers may have been able to steal a late victory in the final moments but Lee's magic play put the game to bed. 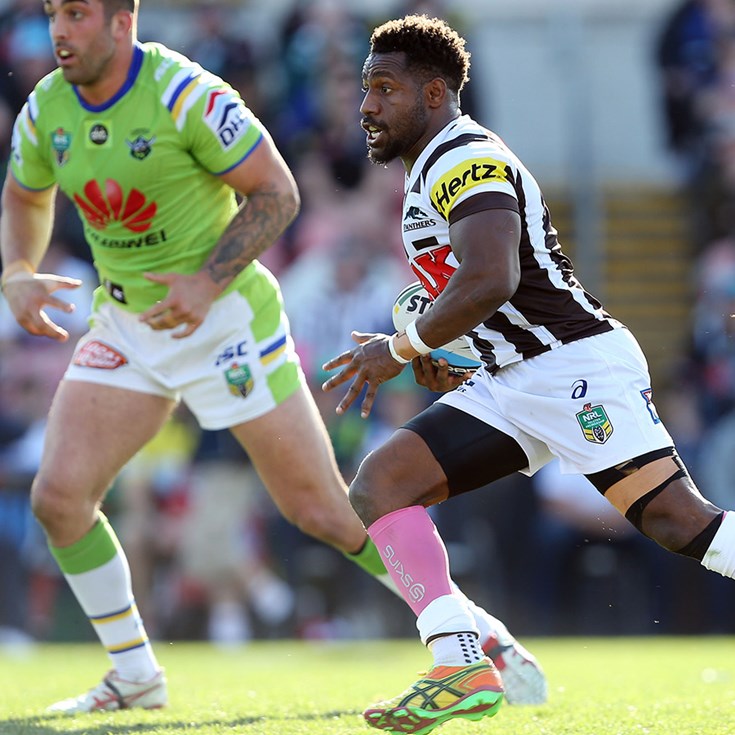 Segeyaro urges Panthers to stick together

Panthers to raise funds for families in need