The Roosters have denied Canterbury what would have been the biggest comeback in the club's history, giving up a 22-0 lead to go behind then steal an absolute thriller 38-28 in one of the matches of the year.

Draw Widget - Round 21 - Roosters vs Bulldogs

A complete hiding was in the offing when the Tricolours stormed to a 22-0 lead at almost a point-per-minute before a slate of penalties helped the Dogs go to half-time just a try behind, then looking like dominating the match with a further two second-half  tries to lead 28-22 with just over 10 minutes left.

But a powerful Blake Ferguson try got the Roosters back within two before a stunning Michael Jennings put-down from a Mitchell Pearce grubber that Sam Perrett was trying to shepherd dead gave the Roosters an unlikely lead with under five minutes to go before a last-second try to Jackson Hastings blew the score out.

The first half was split neatly into two separate periods of utter dominance – one for each side.

The Roosters exploded out of the blocks, almost keeping pace with the clock throughout the opening 24 minutes through a quick double to lanky winger Daniel Tupou and tries to Roger Tuivasa-Sheck and Michael Jennings, before a single error against the Roosters combined with a run of six straight penalties to Canterbury saw the Dogs race back into the contest to lay on three straight tries of their own.

Tupou's first came in the fifth minute when a Mitchell Pearce grubber evaded Sam Perrett, before Tuivasa-Sheck put a huge fend on Trent Hodkinson to stroll over.

Tupou's double came on the back of a frantic last-tackle option that saw a kick batted back and several offloads thrown before a composed Maloney sent a bomb out to the left wing to isolate the much taller Tupou against Perrett.

The Dogs seemed done and dusted when Maloney stepped through the line and sent Jennings over for a 22-0 lead.

But an error in the play-the-ball from Jared Waerea-Hargreaves from the next set handed the Dogs a sniff and a pair of penalties gifted them a full set at the Roosters' line. It allowed impressive young edge back-rower Shaun Lane to cash in, diving on a Moses Mbye grubber to claw one try back.

One quickly became two as another penalty piggy-backed the Dogs into range and Brett Morris sent his twin Josh over.

And as the penalties continued to pile up – six straight against the Roosters for ruck penalties, leg pulls, and a spectacular shoulder charge from Kane Evans on Sam Kasiano that left the former on report – the Dogs began to dominate momentum.

A final push saw Mbye held up in-goal but shortly after spotted a gap out to the left and fired a cut-out pass to winger Corey Thompson, who was given additional space by opposite man Brendan Elliot rushing up, and scored in the seconds before half-time for a 22-16 margin at the break.

Lane continued to trouble the Roosters' left-edge defenders with offloads and 10 minutes into the second half Trent Hodkinson dummied his way past Aidan Guerra to score and earn his side parity at 22-all.

They finally grabbed the lead for the first time just a few minutes later when a perfect Mbye cut-out sent Thompson over for his second and a 28-22 lead.

The Roosters didn't really look like staging a comeback at that point as the big Bulldogs forward pack managed the game in the middle of the field but a running battle between James Graham and Waerea-Hargreaves fired the latter up and a monstrous run off the back of Maloney forcing a drop-out sparked his team into life with a mid-field line break.

From that set Ferguson blasted his way through Thompson out to the right and with a chance to level up, Maloney's conversion from the touchline hit the uprights.

Desperately needing another score the Roosters fired up and with the Dogs flagging late in the contest regained momentum.

The key moment came in the 75th minute; Pearce glided a precision grubber through the Dogs line and along the dead ball line; Perrett, trying to usher it out, left it an instant too late.

Jenning, fittingly in Marvel Super Hero Round with a Captain America-inspired jersey, perhaps more resembled Iron Man and his jet-powered suit when he raced from nowhere and soared through the air to ground the ball millimetres inside the dead-ball line to steal the lead.

With the Dogs out on their feet the Roosters continued to press the line and iced the stunning win with an 80th-minute try to bench utility Jackson Hastings, who scooped up a Greg Eastwood dropped ball to put an exclamation mark on the stunning win.

The result sees the Tricolours sing their team song for the seventh straight week and continue their quest for a top-two finish while the Dogs may drop out of the eight pending other results.

The only drawback for Trent Robinson's men was a serious wrist injury to prop Sam Moa late in the first half that may require surgery and end his season. 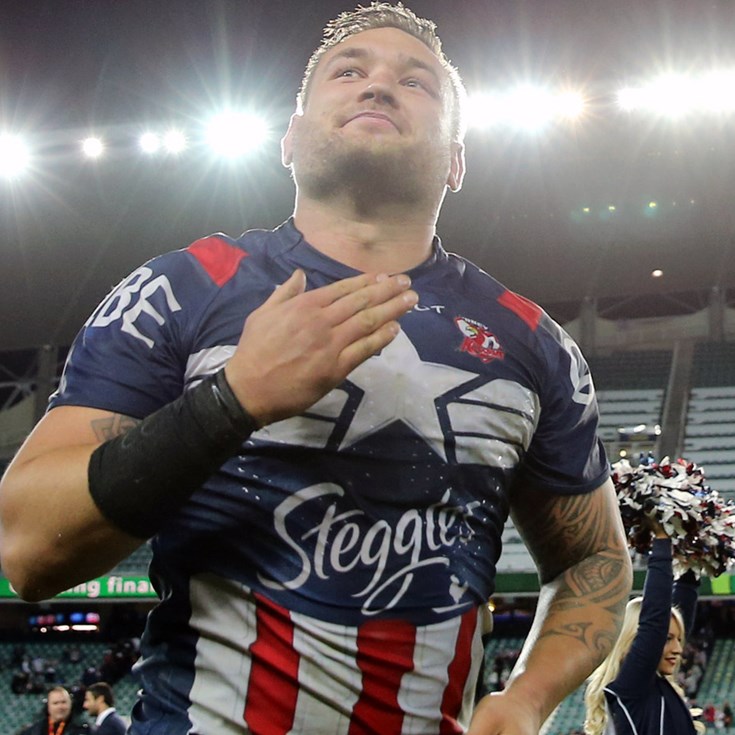