He played 257 first grade games for Newcastle, represented the NSW Blues in 21 Origins and wore the green and gold on 24 occasions but the playing career of interim Knights' coach Danny Buderus could have panned out very differently had it not been for one of rugby league's greatest tales of mistaken identity.

On Sunday afternoon the St George Illawarra Dragons and Newcastle Knights head into battle for the 31st time when they face each other at Kogarah's Jubilee Oval, but according to former St George, Balmain and Wests Tigers fullback Joel Caine, Buderus – a boyhood Dragons fan – should never have played for his beloved Newcastle Knights.

It was November 1994 and two 16-year-olds from the New South Wales coastal town of Taree were invited to an open trial for the Dragons at Kogarah Oval.

"I was the starting five-eighth and my mate who had come with me was a bench player for our Group 3 representative side so I had the box seat for all intents and purposes," Caine recalls to NRL.com.

"We get down to Kogarah and I've had an absolute shocker and my mate has played the best game he's ever played."

Head down and kicking stones, Caine walked out of the famous suburban ground feeling dejected and disappointed.

Moments later his fledging footy career took a dramatic twist – one that would shape the careers of two close mates.

"By the time I got to the gates the phone's ringing saying [the Dragons] want to offer me a two-year contract," he said.

"I couldn't say 'yes' quick enough because I was just so devastated about how I played."

Now officially a Dragon, Caine made the move to Sydney where he was living with the club's Jersey Flegg coach Peter O'Sullivan.

Prior to his current role as recruitment manager for the Roosters, O'Sullivan was the chief recruiter at the Melbourne Storm. He was responsible for unearthing stars such as Cameron Smith, Cooper Cronk, Greg Inglis, Israel Folau, Mitchell Pearce, Jake Friend, Jared Waerea-Hargreaves, Roger Tuivasa Sheck and Dylan Napa – just to name a few.

Caine continues: "I get down there and they rolled the red carpet out for me.

"I'm living with Peter O'Sullivan who was responsible for [the recruitment of] Cameron Smith, Cooper Conk and Greg Inglis – so he's someone who doesn't get it wrong.

"He was playing me at hooker all the time and I couldn't figure out why because I've never really played there.

"We're driving home from training one day and he's asking me why my form has gone off since they signed me."

In an effort to regain his confidence, O'Sullivan sat Caine down to show him the video tape from the trial that took place at Kogarah Oval.

"So he shows me a tape and he's pointing to this particular player saying 'good run, good pass, good tackle'," Caine said.

The next exchange of words between the pair finally revealed O'Sullivan's comical error.

O'Sullivan: "How do I get you back to playing like that again?"

Caine: "Pete, it's a bit hard because the player you're pointing to isn't me."

The player O'Sullivan was pointing to was Caine's mate from Taree.

And the rest, as they say, is history.

Buderus made his debut as a 19-year-old against the South Queensland Crushers in Newcastle's 1997 premiership season and went on to play a further 256 games for the Knights over two stints totalling 14 seasons, finally hanging up the boots at the end of the 2013 season.

He captained the Kangaroos and holds the record for most games as NSW captain having led the Blues on 15 occasions during his 21-game Origin career.

The Taree Red Rovers' junior now runs coaching clinics in his home town and around the Newcastle region and has this week stepped into the head coaching role at the Knights having served as Rick Stone's assistant all season.

"The Dragons should have signed Danny and not me," Caine said.

"Then he became the most-capped captain for New South Wales of all time and a famous Newcastle Knights player, but all he ever wanted to do was play for the Dragons."

Fittingly, Buderus's first game in charge of the Knights will be against the Dragons at Kogarah Oval – the scene of where it almost all began 21 years ago. 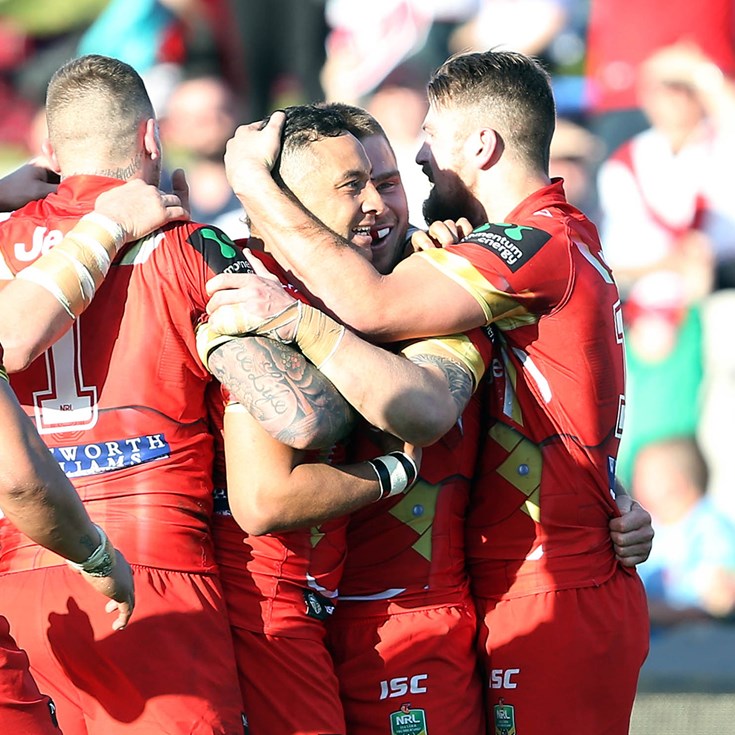