Jared Waerea-Hargreaves and Jarryd Hayne both owned the big moments at the weekend, North Queensland have a new record breaker, the Morris twins are on the verge of setting their own unique record, Nigel Vagana continues to do great things in the Pacific region and an NRL.com celebrity tipster becomes a World Champion.

Hayne Plane takes off in USA

Jarryd Hayne's second touch of the pigskin during his first NFL trial for the San Fransisco 49ers must have felt like a dream. You could have sworn you'd seen it before. Hayne taking the ball and going straight through the defensive line, stepping off his left and leaving would-be defenders scrambling on a dazzling 53-yard run. Surely the two-time Dally M Medalist is now on the cusp of making the final San Fransisco squad and is a genuine chance of playing NFL.

The usually sedate media room was interrupted by a group of boisturous Aussie journalists cheering as Hayne made several big plays in his first trial.

During the Kangaroos 2013 World Cup campaign, Hayne would often bust out the gridiron and throw it around before and after training, with Josh Papalii usually happy to play blocker. The support staff thought it was just a way to let go some unused energy and the boys having a bit of fun. One year later, he made the infamous decision to leave the Parramatta Eels and the NRL, with no guarantees, just a chance to pursue a boyhood dream that seemed like a pipedream.

"I'm so passionate about the challenge that lies ahead for me, not only as an athlete but more so as a person. It's the hardest decision I have ever had to make in my life," Hayne said at a press conference before leaving Australia.

"I'm leaving my team-mates, friends, and most importantly my family; but for me to grow as an athlete and a person I feel this is the right step to take."

And how'd he react to a dream debut?

"I felt a huge weight lifted," Hayne told 49ers.com. "I put a lot of pressure on myself. I wanted to go out there and fit in.

"I didn't want to go out there and look like a rugby player. I wanted to look like an American NFL player, and I felt I did that."

Whatever happens from here, Hayne has certainly proved a lot of people wrong and achieved more than most thought he would.

The other Jared owns the big moments

Jared Waerea-Hargreves told colleague Chris Kennedy that he wanted to own the big moments. The Roosters prop has lived up to his words against the Bulldogs, Knights and now Eels. Hargreaves has hit career best form and has come up with some massive plays to help the Roosters charge towards the Minor Premiership. Trailing by two points against Parramatta with 10 minutes to play and a massive boilover looming, Hargreaves took the ball and simply refused to go down. He barnstormed over four defenders to score a match defining try in a charge that screamed his new found leadership qualities.

Hargreaves had just welcomed his daughter into the world a few days earlier and said he had only had 10 hours of sleep during the week.

Congratulations on the beautiful girl.

Welcome to the world our beautiful Zahli Rae... 😍

Gideon Mosby scored his 30th try for the season in the Holden Cup against South Sydney on Thursday night at 1300SMILES Stadium. He now has the most tries of any player in a single season in the Holden Cup. There are still three games left in the regular season, plus finals. He looks destined to set a record that will never be beaten. While scoring tries in the NYC is no guarantee to a successful NRL career, there are high hopes for the North Queensland speedster.

Most Tries in an U20s Season:

Brett Morris scored another two tries at the weekend to add to his ever growing tally, but when brother Josh scores another two, the twins will hold another unique record. Josh needs just two tries to join the 100 tries club and in doing so, the Morris boys would become the first brothers to each rack up a century of four-pointers. That will be something special.

Well done to NRL.com celebrity tipster Paige Hadley who won the netball World Cup with her Australian Diamonds teammates on Sunday afternoon. It is the Aussie Diamonds' third successive World Cup victory. Not only is she now a World Champion, Paige is steadfastly holding on to her lead at the top of the NRL.com tipping competition.

Well done to Nigel Vagana and everyone at the NRL for the work being doing in the Pacific. Vagana works tirelessly on these issues and has recently been in Noumea for a training program that aims to improve participants’ leadership skills and broaden their knowledge base on Pacific social issues. NRL.com will have a story later in the week with all the details of the work being done.

Blessed to spend a week in Noumea at the Headquarters of the Secretariat of the Pacific Communities. Our NRL Pacific Leadership Camp empowering our current & ex-players to address real problems in our communities....through a strong core...nothing is impossible. 💯👊Respect. Integrity. Courage. Unity. #NRLweR1 #spc #anu #tokouso #polyMyWay #thefamily

Cronulla players were on hand to help launch the Shark Island Challenge on Friday, a bodyboarding competition that attracts 20 of the world's best.

"The last three years I've gone down and watched it from a distance up on the hill. I think from all reports it's one of the heaviest waves, it's pretty close to the reef so if you come off you're looking worse for wear," Luke Lewis told NRL.com.

"The way they throw themselves into the waves and the way they make some moves on the waves is just absolutely crazy. I like to go out and catch a bit of white wash but that's about it so to see what these guys do is pretty special. It's just a real good day, sitting out there and watching what these blokes can do."

You can find out more about the event here. 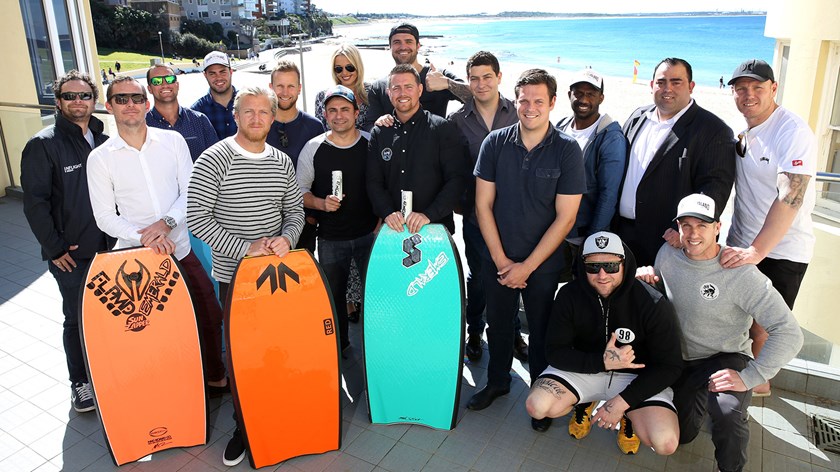 Presented By Chemist Warehouse 3 hours ago
00:48