Draw Widget - Round 24 - Titans vs Raiders

Although it was Dave Taylor who was named at five-eighth to partner Kane Elgey in the Titans' halves Greg Bird assumed the key playmaking role but Neil Henry's plans were thrown into chaos with the first play of the game. Bird suffered a tear in his quadriceps in getting the game underway and lasted just four minutes before coming from the field, slamming his fist into a door on his way to the dressing rooms. Daniel Mortimer was handed the goal-kicking duties and failed with his first two attempts and after the Raiders scored their first try of the game Taylor was handed the kick-off duties. Given Aidan Sezer's injury woes in recent years you could excuse new recruits Tyrone Roberts and Ashley Taylor for requesting new numbers to play in when they come to the club in 2016. Man of the Match Elgey could be missing from the Titans' final home game of the season next Sunday against the Dragons having been placed on report for a trip on Joey Leilua in the second half. The loss of Bird is likely to be permanent with Henry not expecting him to return for the closing two games of the year.

"I'm not a doctor but he's hobbling around there now," Henry said. "I can't see with a couple of weeks to go that it's going to be OK but who knows. It grabbed and he couldn't run so I think he'll be in extreme doubt to play again this year."

It did little to soften the disappointment but an uncharacteristic effort from the 2015 Raiders won't be tolerated again by coach Ricky Stuart over the closing two games of the season. Still heartbroken from having their finals hopes "stolen from them" by Manly in the dying minutes last Sunday, Stuart excused his team for their lacklustre showing against the Titans but added that it would not be acceptable in games against the Panthers and Eels.

"It's been a very, very tough week and very hard to actually get the players back into a bit of intensity," Stuart conceded after the game. "It's been very flat at training and very hard from a coaching point of view and for the players and if I ever excuse a loss I'll excuse that one today.

"But that's it. We've got to make better choices next week and get a bit of attitude back towards our training. They're a good group these guys, there's a lot of resilience there but they were knocked around last week.

"You can come out and say you want to play for the jumper, you want to play for pride, I can promise you, this group of players that I've got, we've got a very strong culture for the club. They're very proud of the club and the jumper they play for but it's just human nature. It's been a very tough week because there have been a lot of months of work go into that loss last week and when you see your season go, it just makes it hard.

"It's just human nature and there wasn't a lot to play for today but we've got to make better choices going into next week."

Enigmatic winger still without a home

His shadow cut a solitary figure as he rode his skateboard out of the bowels of Cbus Super Stadium on Sunday night but where Kalifa Faifai Loa is headed next year still remains something of a mystery. Faifai Loa scored his second consecutive double in just his fifth game of the season in Sunday's 28-12 win over the Raiders but the Titans winger has not yet been able to secure a contract on the Gold Coast beyond the next two weeks. Having also played under Neil Henry at the Cowboys, Faifai Loa has given a timely reminder of his talents in recent weeks but Henry said it will only be through similar performances in the final fortnight that any offer could potentially be forthcoming.

"We know that Kalifa can find the try line. He has a very good awareness about where his body is in motion and he has a knack of getting that ball down," Titans coach Neil Henry said. "He's made the most of his limited opportunities this year and he's had to wait and be patient but he has been playing some solid football at Tweed. The way he's handled not playing first grade is a credit to him. The thing about his future is that if he keeps playing good football to the end of the year then he becomes attractive to teams or our team. At the moment there's no offer there but we haven't closed the door."

There are no secrets to success but Canberra fullback Jack Wighton believes the pain of 2015 will hold a youthful Raiders team in good stead when they start again in the off-season.

Only the ladder-leading Broncos had scored more points than the Raiders heading into Round 24 but six losses by four points or less will prove the difference between a team of potential and a premiership contender. Five of those losses suffered during the season were by two points or less and Wighton says it is a lesson in mental strength that they have to absorb before Round 1, 2016.

"It's just the whole NRL season. You've got to be mentally strong and we lost that tonight so hopefully we can get that right for next week," Wighton told NRL.com.

"We've had a lot of trial and error and I think as a young team we'll start putting it together. We'll stick together and close losses will become wins.

"You look at last year and all the stuff and all the results and I think this year we've been a lot more competitive and a lot more energetic and I think we're starting to bring a few more fans now because we're turning it on. We're just missing them by that little bit.

"We're looking more closer to the wooden spoon now and that's just not us and our team with what we've got. We're a better team than that but it's just the way things have worked out."

Shot clock could use a shave

For the second time over the course of Round 24 the shot clock was put into effect for the Holden Cup clash between the Titans and Raiders and it was clear that the 35 seconds being trialled may be too generous. Teams were given 35 seconds to complete a scrum or take a line drop-out during the Titans' big 40-12 upset win over the sixth-placed Raiders but rarely did the clock get anywhere near its expiration. Most scrums were set and completed with 15 seconds still to run and no penalties were issued for teams failing to pack in time, only once in the second half did the clock sneak under the 10 second mark. Perhaps a nice round 30 second allowance will be the magic number when it is introduced in the NRL proper next season. 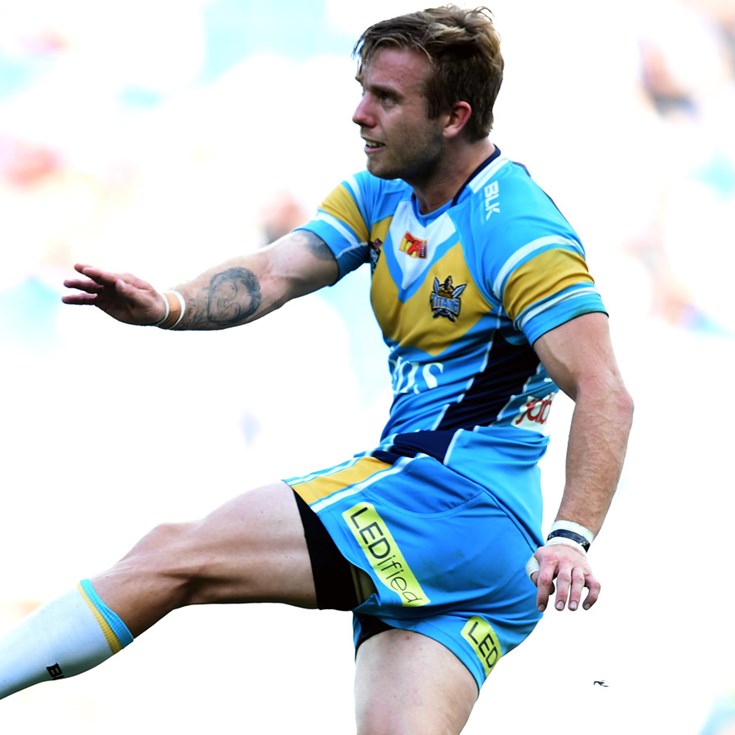 Weird and wonderful in Titans triumph

Titans walk tall for cancer cause