Roosters centre Michael Jennings will miss his side's Round 25 match with the Sea Eagles, after the centre accepted an early guilty plea on Tuesday, one of seven players to do so following Round 24.

A grade one careless high tackle charge would not normally result in a suspension, but six carryover points and two prior similar offences in the last two years means Jennings will be unavailable on Friday night.

Canberra centre Jospeh Leilua will miss his side's final two games of the season, cited for a shoulder charge, which attracts a base penalty of 200 points.

Titans second-rower Ryan James (grade one dangerous contact – head/neck) will also miss one week, with a prior offence and carryover points also not helping his cause. Gold Coast teammate Kane Elgey was also charged for tripping, but has escaped suspension with an early plea, likewise Eels forward Junior Paulo (dangerous contact – other).

From Thursday night's game, Dragons pair Tyson Frizell (tripping) and Jake Marketo (grade one dangerous throw) have both elected to take the early guilty plea, with Marketo to miss the Dragons' trip to Cbus Super Stadium to face the Titans. 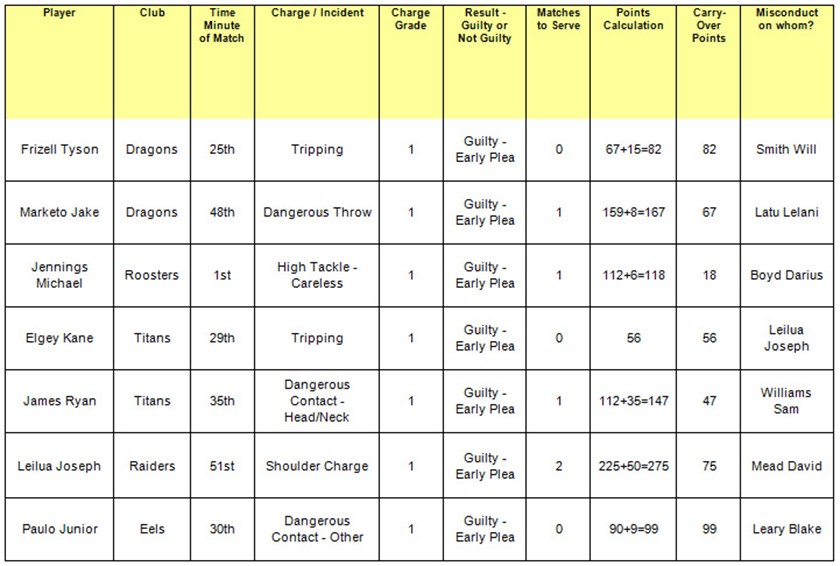