The Bulldogs have held on to a 20-18 win over the Newcastle Knights despite losing halfback Trent Hodkinson midway through the first half with a suspected wrist injury.

In what was the Knights' Old Boys Day and Kurt Gidley's 250th and final NRL game at Hunter Stadium, the Bulldogs became just the eighth team ever to beat Newcastle in their final home game of the season with Moses Mbye leading the way alongside makeshift half Josh Jackson.

"I think he'll be okay. It was precautionary. We didn't want to risk him – that's why he didn't come back on in the second half," Hasler said.

"There's always the option of resting him next week. We'll wait and see how he comes up. He'll have scans when we get back to Sydney and we'll take it from there."

In perhaps an apt start to Old Boys Day, Bulldogs back-rower Frank Pritchard was placed on report for a careless high tackle on Jake Mamo, with departing captain Gidley ensuring a melee unfolded in defence of his teammate.

Following an opening exchange with plenty of feeling Knights back-rower Tariq Sims scored in the corner in the 12th minute after a Gidley chip kick was misread by the two wingers and Bulldogs fullback Brett Morris.

Eight minutes later with Newcastle on the attack, a floating Mamo pass was swiftly intercepted by Bulldogs winger Curtis Rona who ran 90 metres to score his side's first of the game.

A Beau Scott high shot on fullback Morris was the impetus behind Tim Lafai's 26th-minute try with the Newcastle defence opening up for the Bulldogs centre.

Unperturbed by Hodkinson's departure, the Bulldogs sealed a 14-6 half-time lead when Damien Cook left the Knights gasping at thin air when a 40-metre scoot saw him outpace Mamo to score in the corner.

The Knights weren't out of it though and they were the first to score in the second half when winger Nathan Ross outpaced opposite man Sam Perrett to get a handle on an inch-perfect Tyrone Roberts grubber.

Newcastle were disallowed another in the 57th minute when Mamo dropped the ball in the lead-up to his own try, which proved a double whammy when prop Korbin Sims limped off the field.

Pritchard's try in the 63rd minute came too easy for the Bulldogs when they capitalised on the Knights' short right edge on the last tackle for the back-rower to slide his way through.

Newcastle stayed in the contest when captain Gidley pushed his way past Pritchard and Lloyd Perrett with ease to cut the deficit back to two points with 10 points remaining.

With Ross and Akuila Uate blowing solid try-scoring opportunities in the final 10 minutes the Bulldogs were able to hold on to a slender two-point lead – despite a bizarre final few minutes that features a female field intruder and referee Adam Devcich falling on top of an injured Morris.

Interim Knights coach Danny Buderus said he was impressed with his team's attitude despite the defeat.

"You go through the games as a coach, you go through and say, wow, could've done that better. But all I've been worried about in these last six weeks is the fight, and they produced that in spades tonight," Buderus said.

"There was belief – that's something other teams can't take away from them." 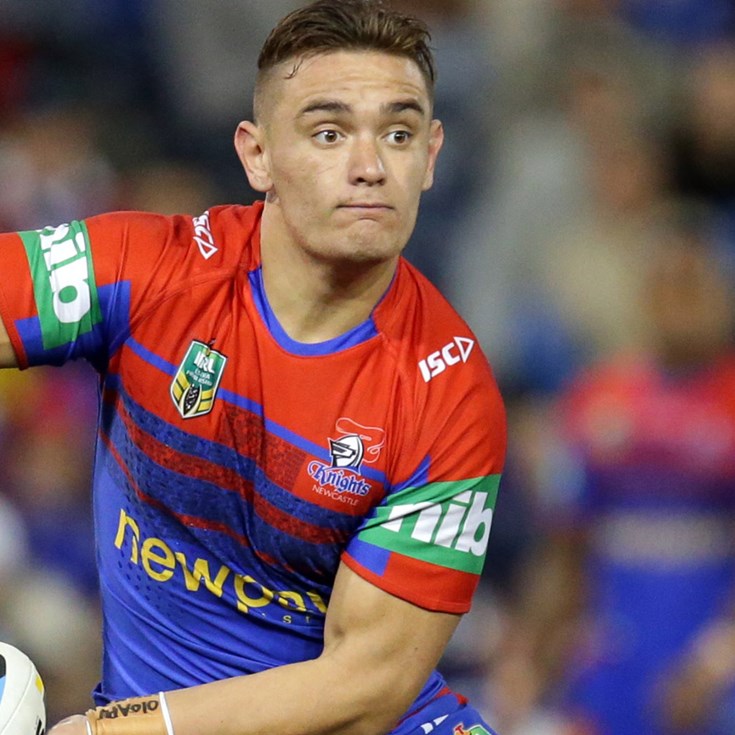 Levi's mad dash back to Newcastle